My God, It's Full of Stars (or will be eventually; and children too) 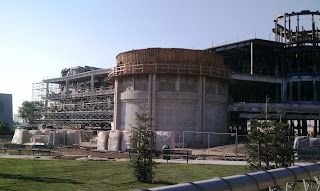 No, this is not really a post about the last line from 2001: A Space Odyssey. It's about the planetarium that is beginning to emerge in the center of the photograph. It will be full of stars in a manner of speaking very soon, and there will be lots of children inside who will be learning about the wonders of the Universe.

This is exciting news for those of us who live in the Modesto area. For all the time I spend on this blog talking about the wonders of California, well, sometimes Modesto and the surrounding area comes up a bit short. We have been declared 99th out of 100 on the best places to live in the US by some compilers, and that is because we have some of the worst air quality of any place in the nation, and are kind of famous for having the highest, or near highest rate of stolen cars. Our economy is in a shambles. You think that the national unemployment rate of 9% is bad? Ours is around 18%, and many of the rest are underemployed, working part-time. Benefits? Hardly. I'm not sure I can recall any time in the last twenty years that the unemployment rate has fallen below 10%. It is truly a depression here. Part of our problem is that we have one of the most uneducated populations anywhere.

It's actually so bad that a local pundit suggested that instead of trying to educate our children for a better future, that we concentrate on bringing in more employers who specialize in unskilled laborers, because that's the only "short-term" solution that he can think of. The problem has always been that those kind of short term ideas become permanent. I can't accept this. It's a hopeless attitude, and it is poisonous. Education has to be the ticket to a better community. That's the reason I've been in the trenches here for twenty years, along with many primary and secondary school teachers who work without resources and with poor institutional support. They're good people trying to make a difference for their kids.

That's what makes the picture above so exciting. Several years ago, the community decided to invest in a better future, and voted for a huge bond act to finance the renovation of our college, almost from the ground up. One of the centerpiece projects is the Science Community Center.

Our center may very well open for classes in the fall of 2012. For the first time, our college students and children from area schools will finally have access to a state-of-the-art planetarium, an observatory, and a natural history museum that until now has been housed, well, in an old house. There will (probably) be an outdoor learning environment with a large pond and native vegetation.There will be a modern facility for the chemistry, physics, biology, and astronomy laboratories, and more to the point: new classrooms and labs for earth science and geology!

Our local community decided to fight for a better future. 99th? We've got our problems and we'll probably never be a swanky chic city that vies for number 1. But we'll make sure our kids have a decent chance to learn about the fascinating world that exists out there, and the cosmos beyond. They deserve that much from us. They certainly don't deserve the kind of thinking that says build another sweatshop, and pay them minimum wage.

This is Great news. I can never understand when people put education and health improvements at the bottom of a list.

Yay! My parents lived in the Central Valley between Tracy and Modesto during their retirement years, so I sort of got a little bit familiar with the area and its problems. The number of people "making do" (or NOT!) with odd jobs or seasonal fieldwork is really sad. Anything that can get kids excited and interested in STEM fields, and on to college, is really great!

I wish my parents had lived long enough to see a planetarium grow up in their backyard. My dad, especially, would have really enjoyed seeing it.