The Third Hottest Place in the World? You're Not Gonna Believe It.... 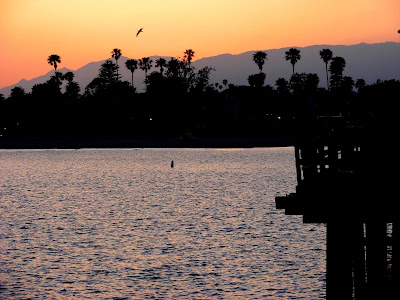 The hottest place in the world for fifty years!?

All of the discussion of the heat in California, and the all-time record that was set in Los Angeles today (113 degrees in late September!) brought to mind a story I read long ago when I was teaching in a different place. It involved a place that held the record as the hottest place in the world for more than 50 years (and it was where I was teaching at the time). An online discussion today with some of my former colleagues jarred my memory. The location was a few hours away from Los Angeles, and given all the writing I've done about Death Valley, the park would be a fair guess. But Death Valley is the second hottest place on the planet, based on a reading of 134 degrees in 1913. It was the hottest place in the world for only 9 years until a spot called Al 'Aziziyah, Libya recorded a sizzling 136 degrees in 1922. That record still stands.

The hottest place in the world for more than fifty years? Santa Barbara, California. Santa Barbara?? That's the story. Here is the account from 'California's Wonderful Corner' (1975) by local historian Walker A. Tompkins:

"As the sun slipped above the hills east of town on the morning of June 17, 1859, it revealed another near-perfect California day in Santa Barbara. From a cloudless, brilliant blue sky, the brassy ball of fire overhead beat down upon the tile-roofed adobes and dusty roads, quickly raising the temperature. As mid-morning passed, so did the 80-degree mark. It was nothing out of the ordinary, but that would soon change. By day's end, the small town of several thousand people would suffer through what was, at the time, the hottest temperature ever recorded on earth.

As morning passed into early afternoon the heat continued. Then, from out of nowhere, a blast of superheated air blew over the Santa Ynez Mountains like a blowtorch. The sky was soon darkened by a massive dust cloud, kicked up by the blistering wind. Not long after, the heat "began taking a terrible toll on the beasts in the field," wrote the late Santa Barbara historian Walker A. Tompkins, "leaving the buzzards a feast of calves, rabbits, field mice and even full grown cattle who perished under the oak trees where they had sought respite from the punishing heat."

By 2 p.m., the temperature had rocketed to an unbelievable 133 degrees! People fled to the Old Mission and Our Lady of Sorrows church in sheer terror, thinking the world was coming to an end. Others took to their adobes, desperately seeking refuge behind the earthen insulation of mud walls.

"No human being could withstand such heat out of doors," says a government report later issued in 1869 by U.S. Coast Survey engineers. The survey crew happened to be on a vessel at sea in the Channel at the time, and were it not for them, an official record would not exist.

Fruit shriveled and fell from trees. An entire grape crop was baked in the Goleta Valley. Birds fell out of the sky in mid-flight, their carcasses scattered over the land. Others were found drowned in the bottoms of wells where they had tried to escape the heat.

Then, just as mysteriously as the wind emerged, it died. The temperature fell slightly to 122 degrees by around 5 p.m. and finally down to 77 degrees as the sun set.

Santa Barbara's world record remained for 55 years (sic) until it was beat by a single degree in Death Valley. Nine years after that, in 1922, a heat wave of 136 degrees hit Libya, which remains the hottest temperature yet documented.

To this day, the simoom that seared Santa Barbara in 1859 with 133-degree heat remains the third hottest temperature ever recorded on earth. There exists no comparable event in meteorological history or known Native American folklore. "

Update: As noted in the comments, it was D. E. Putnam who wrote the article. I appreciate the clarification and am glad to give credit where credit is due!

Whoa. I cannot imagine sitting on a beach in SB in a sizzling 133F. I lived there for 9+- years and I just can't fathom a temp like that, there.

I didn't even like the 122 in Needles one year I was working down there...

Feels that hot in the bottom of the canyon some summer days. No thanks.

That short article recounting the heat wave in Santa Barbara of 1859 was actually written by me. My source was Walker A. Tompkins, but he did not write it. It was published as a letter to the editor by Noozhawk and Edhat.

Sorry to send another message, but I should have been clearer in my first one. Can you please credit me for the article? I don't mind if you reprint it in its entirety, but I would like to have credit for my words.