Dispatches from the Road (the one I wish I was still on): The Nu'uanu Pali and a bit of Hawaiian History 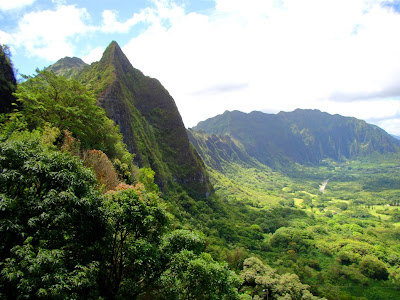 It's been a few weeks since I was enjoying a visit to the Hawaiian Islands, and school has begun in earnest, but I had a few more dispatches that I hoped to complete before academic matters overwhelm me. We've visited Pillbox Hill, stepped over molten lava, searched for native bird species, found invasive species, and explored two kipukas on the Big Island. We explored one other trail, the Old Highway on the Nu'uanu Pali near Highway 61 where it passes through the Ko'olau Range between Honolulu and Kailua. It's a place of mysterious stories and tragic history.

There's a movie and TV trope called the Fallacy of the Climbing Villain. In a chase scene, the person being chased has a choice of going downstairs or upstairs. They invariably choose to go up, which invariably leads to them to being trapped or plunging down to their deaths. It's a sign of weak scriptwriting skills most of the time. On the other hand, there are moments in real life when one has no choice. In the first years following European contact with the inhabitants of the Hawaiian Islands a momentous event was unfolding. For the first time in Hawaiian history the islands were being united under one king, Kamehameha I. This unification was not a voluntary exercise; the kings and chiefs on the various islands were not willing parties to the idea, and a series of violent invasions were needed to subdue each of the main islands (with the exception of Kaua'i. The king of Kaua'i got smart and acquiesced after seeing what happened to everyone else).

On Oahu in 1795, things weren't going well for Kalanikūpule and his army. Kamehameha drove Kalanikūpule's soldiers up the Nu'uanu valley, and they soon found themselves trapped between the forces of the invader king and the 1,000 foot Nu'uanu Pali. A few tried to climb down, but more than 300 were driven over the edge, plunging to their deaths (hundreds of skulls were found at the base of the cliff during road construction in 1898). The remaining forces surrendered and the invasion of Oahu was complete. 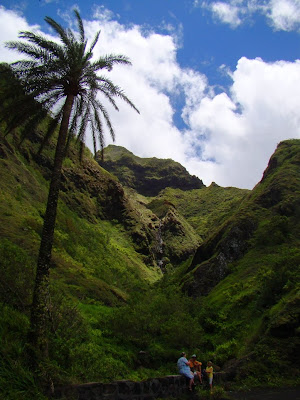 Plenty of other stories abound about mysterious beings around the Pali. There are tales of the goddess Pele (we heard one of them from our waitress at a restaurant in Kona) appearing as a woman hitchhiker. To this day, travelers on the highway carry gifts for the gods as they drive over the pass.

In 1959, tunnels were bored through the cliffs to build a modern thoroughfare, and the old narrow Pali Highway was abandoned to the elements. It serves today as a trail that provides spectacular views of the Pali cliffs and the lowlands of the ancient Ko'olau caldera that now is covered by the towns of Kailua and Kane'ohe. It's a wonderful stroll that provides a better view of the cliffs than the heavily visited Pali Overlook. It also turns out to be a pretty neat spot for birdwatching. 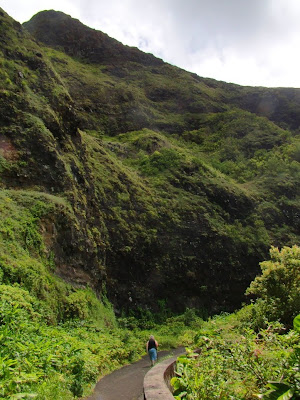 The Pali cliffs formed in part because of one of the giant landslides that have originated on the different Hawaiian islands, landslides that carried debris for dozens of miles out to sea, and caused massive tsunamis not seen or experienced in human history. I discussed one of these incredible events in this post.
Posted by Garry Hayes at 9:36 PM

Wow, that is some lush and rugged country. The cultural history is harsh. Yet I love the idea of using the old road for a trail. I'll bet you're thinking it would be nice to be there instead of the hectic classroom. ;)