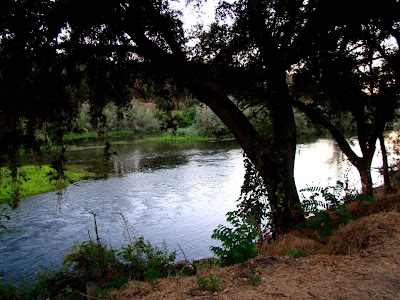 I had the privilege of traveling in wonderful exotic Hawaii last month, and this week I will be taking my students to the wonderful spectacular Sierra Nevada and Owens Valley, and in between these trips I daydream of not doing Program and Curriculum Review, and grading. I travel in my mind to those other places, wishing I was there. But sometimes, you get those couple of moments on the home turf that remind you that anyplace you live, that's where you are, and it has a geological story.

I took a stroll the other evening along a river walk I didn't know our fair city had. I've been here for twenty years, and for most of that time, the town ignored the little treasure they had in the river. The river banks were occupied with a sewage treatment plant, a nursery with high fences, and various back lots of businesses who didn't allow access. When a huge new housing development went in (eh...just prior to the bursting of the housing bubble, of course), someone made a requirement that a river walk and park be constructed as part of the deal. The entrance of the park is so well hidden, it took me a couple of years to find it (it looks like an entrance to a private estate). The walk winds through some beautiful giant oak trees a few yards above the river. 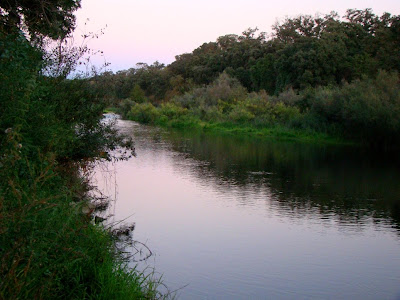 To my surprise, the park revealed some bedrock! Those who live in California's Great Valley are used to seeing dirt in their foundations, not rock. The town lies along a shallow channel carved by the Tuolumne that is just deep enough to reveal an exposure of Valley Springs formation, a volcanic ash layer dating to Miocene time. For a boring little farm town, it is interesting to think that at one time the region was in the path of a rhyolite caldera eruption from somewhere off to the east, maybe as far away as Nevada. 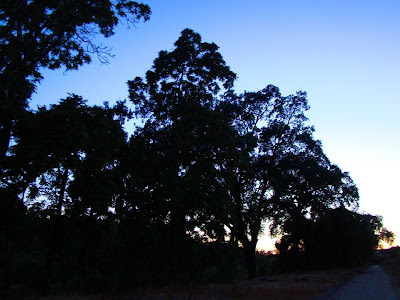 Walking in the twilight among the ancient oak trees, I imagined the animals living along the river; the raccoons, the foxes, coyotes and feral cats. Saw a couple of them. In the growing darkness, it was a little easier to let the mind wander to an earlier time. Like back into the Ice Ages. In those days, the animals prowling the river were a little bit...different.

A few years ago, a woman called saying she had found a piece of petrified wood along the river. I was quite skeptical, but took a look at what she had found, and my jaw dropped: it was a section of wooly mammoth tusk! Yup, these oak woodlands were once the stomping grounds of those incredible creatures, along with bison, horses, antelope, camels, giant ground sloths, short-faced bears (bigger than grizzlies), dire wolves, sabertooth cats, and American lions. A quiet walk along the river at dusk would have been a dangerous and nerve-wracking affair 15,000 years ago!

I sometimes think of my little town on the flatlands of the Central Valley as kind of boring place, even geologically. But sometimes, in the right frame of mind, I realize I need to tell Toto that I'm not in Kansas anymore. I'm in a special place*.

*With apologies to Ron Schott of a Geologist's Home Companion; Kansas has interesting stuff, too

Yup, geology is everywhere, I guess, even when you can't see it. Thankfully.

The Owens Valley, always a favorite for geology field trips. I spent 15 years living in a hole in the Bishop Tuff wondering if an earthquake or volcano would blow a hole in Crowley dam and wash us downstream.