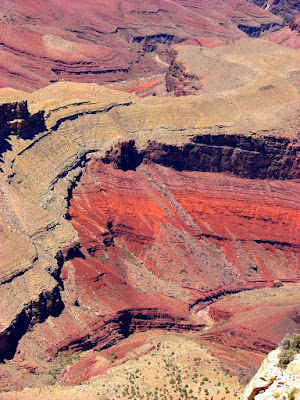 Lockwood should know better than to ask a bunch of geologists about their most important geological experiences. Talk about a way to get volumes written in record time! In fifty-plus years of life and 25 years of teaching, I've had a lot of experiences, and so many of them are treasured, but I suspect that many, if not most of us remember the moments when we decided to become geologists and/or teachers. I don't know how it is when one becomes a business or sociology major, whether there is a moment or a time when one becomes inspired to follow such a path, but I think a great many geologists can pick a moment. Mine was in 1976, and it happened deep in the Grand Canyon, and at a deep place in geologic time (and one of my first true insights to the vast expanse of it all).

I was a gawky, thin teenager in my first year at community college. I thought vaguely about a major that would allow me to work outdoors, as a ranger or something like that, and was leaning towards biology, but those classes were full, so I enrolled in an Earth Materials class that first quarter, followed by an Earth Processes class the second. My interest was piqued, but the possibilities didn't really come real to me until I also took a field studies course that second semester: Geology of the Grand Canyon. We met every Friday for two hours, and memorized the names of the layers at the canyon, reviewed the geologic history, visited the hall of tracks at the Raymond Alf Museum at Webb School in Claremont, and took a shake-down backpack in the southern California mountains. We took the shake-down because we weren't just visiting the Grand Canyon and looking over the edge. We were going in, spending 4 or 5 days below the rim, checking out each and every one of the layers from top to bottom (and back to the top again).

The trip involved a hike along some of the semi-maintained trails that are not usually a part of the tourist experience. The route down was along the New Hance Trail to the Colorado River, then along the Tonto Platform to Horseshoe Mesa, and then up the steep trail to Grandview Point. The entire journey was a revelation, as we saw the Paleozoic and Proterozoic sedimentary formations up close and personal (miles are meaningless in the canyon; when climbing out, you note what layer you've reached, not a mileage post), explored a copper mine, climbed through two limestone caverns (with ropes and helmets, no less), and even of all things, saw the aurora borealis from our camp on Horseshoe Mesa. I walked out of the canyon a geology major.

One of the singular moments that has stayed with me all these years was on the first day hiking into the canyon. We stood on a high ledge at the top of the Redwall Limestone and looked across at an outcrop of the Late Proterozoic Shinumo Quartzite. That's it, in the picture above. Our instructor, Marlin, asked us why the Shinumo seemed to stick up through the younger Tapeats Sandstone. There we were, a bunch of students without a clue, tired, and frankly I never would have even looked at the outcrop, but once directed, the rocks became an incredible landscape buried in the deep past.

The rocks of the Shinumo had once been an island, a 900-foot-high, miles-long island in the middle of a vast shallow sea that covered most of the western United States. It was so old that no plants or animals would have graced the slopes and cliffs. Just a few trilobites and worms squirming and burrowing about in the muds and sand in the water below. It was a stunning moment for me, to realize that we really could travel through time, reconstructing past worlds, and understanding the scope of change that has happened to the Earth's crust through deep time. For some reason, all the fossils, all the childhood knowledge, the book learning, none of it affected me as much as suddenly visualizing that ancient buried island.

We continued down the trail, and saw many more wonderful things, but nothing that so effectively awakened a curiousity about the Earth as that moment. It is one of my most vivid geological experiences. Thanks Marlin, for the insight.
Posted by Garry Hayes at 10:43 PM

Couldn't be a better place to fall in love with geology. You took a tough trail which I haven't been on. I wonder if it went near the super group.

Our experiences match very closely in time and space. I took a summer job working in a cafeteria at the Grand Canyon in the summer of 1976. I did a lot of day hiking that summer including part of the area that you discuss. I went back to school in the fall and signed up for Introduction to Geology and was hooked.

Gaelyn, the trail most certainly did! We got to hike through the Bass, Shinumo, and Hakatai formations, and got to lay our hands on the unconformities. Also saw some of the Proterozoic diabase intrusions at Hance Rapids also. Marvelous rocks!

Wow, what a memory Garry!

What I remember from that trip most is - and I admit from the start that none of them are geological memories: 1) Crawling around camp the first morning after the hike down the Old Hance Trail, because all of my downhill leg muscles had totally failed me. 2) That same morning, warm, sunny, and dry, looking back up at the rim at the snow that had fallen overnight a mile above us. 3) Watching the river raft guides figure out how they were going to maneuver Hance Rapids, and then watching them do it, thinking, really, those rapids didn't look so tough from our view up high on the trail! 4) (memory overlap and proof it happened) - seeing the northern lights! 5) the climbing we did in the cave halfway back up, where I did some motion that caused my shoulder to come out of its socket, and I still had miles to go with a backpack on (ever since, my shoulder will come out of its socket if I'm not careful). And 6) Right after reaching the top of the trail at the rim, after our amazing few days down in that canyon world, seeing people drive up, get out of their big cars in slacks and sandals and dresses, walk to where they could see the canyon, take a picture, say well, that is beautiful, and then get in their car and drive away.