Columns on Columns: Other Jointing Stories This Week 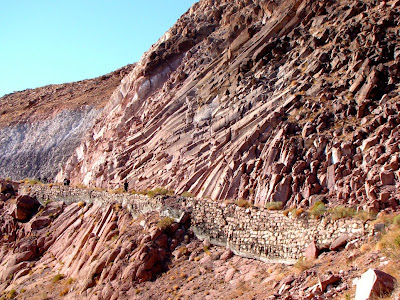 The vertical columnar joints that I saw at Devils Postpile weren't the only columns we saw on the field trip last week. We paid a visit to the Owens River Gorge on the Volcanic Tableland north of Bishop, California. The vast mesa is a rhyolite plateau that preserves a record of the one of the greatest explosions ever to shake North America, the eruption of the Long Valley Caldera. The 125 cubic miles of ash that was blasted into the sky 730,000 years ago produced the Bishop Tuff, which has been found across the western United States and as far east as Nebraska and Kansas. 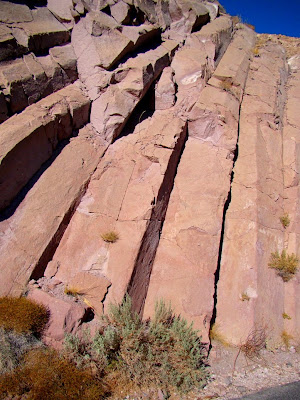 The giant explosion vacated a massive magma chamber, which subsequently collapsed, producing a hole two miles deep, ten miles wide, and 20 miles across. The caldera was partly filled with ash, but over the years a huge lake accumulated. When it finally spilled over the edge of the caldera, the new Owens River rapidly carved the gorge 400 feet deep. Along the way, the river exposed the columnar joints that developed as the hot ash settled, partly remelted, then cooled and contracted. They are easily accessed from one of the power station roads maintained by the Los Angeles Department of Water and Power.
As I was writing about the columnar jointing at Devils Postpile National Monument, it occurred to me that I had seen a number of geoblogosphere posts that involved the phenomenon in the last couple of days. Do posts by five bloggers make it columnar jointing week?
The youngest geoblogger, Sam at Geology Blues, has a note on Devils Tower.
Looking for Detachment's Silver Fox posted some beautiful pictures of Deep Creek Falls in Oregon, which thunder over some basalt columns. Then there were her pictures of jointing in basalt in the same general region, a Friday Mystery Photo.
Last Thursday it was Philip at Geology Blues with a picture of columnar joints in basalts on his commute in Oregon.
Though columnar joints aren't specifically mentioned, Glacial Till has pictures of the Columbia River Gorge and some of the basalt columns appear in the cliffs. Till writes of a new appreciation of the geology there.
Posted by Garry Hayes at 9:41 PM

Thanks! I've walked past them many times, but never really saw the whole cliff worth of columns. Usually too close to the cliff, I guess.

We have very similar ash-flow tuff columns exposed at the other side of the Earth -- in Hong Kong, and I am currently doing my PhD on the rock. check it out.