A Column on Columns: Tuesday's Mystery Photo and the Devil's Work 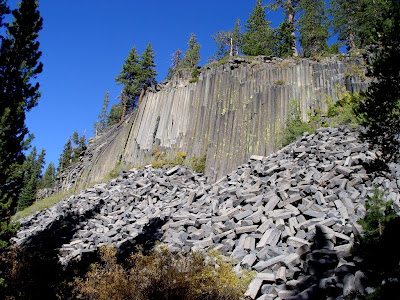 It didn't take folks very long to figure out that Tuesday's mystery photo was taken in the vicinity of Devils Postpile at the national monument of the same name. Devils Postpile is justly famous as a stunning example of columnar jointing in a volcanic rock, and the vertical columns seen here are relatively rare around the world (Devils Tower in Wyoming and the Giants Causeway in Ireland are well-known examples). Most pictures and descriptions of the columns concentrate on a view from the base (above)... 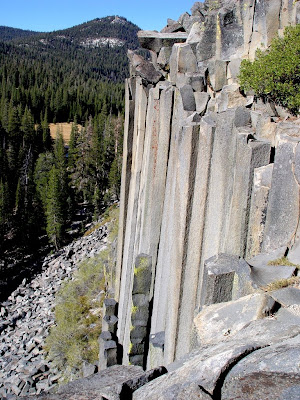 ...or the view from the top, looking down on the massive talus pile at the base. The Postpile gained monument status in 1911 after someone floated the brilliant idea of dynamiting the columns and using them to construct a dam across the adjacent San Joaquin River. Kind of like using the meadows of Yosemite to graze sheep, or strip-mining Death Valley National Park (both of which happened).

The Postpile formed when a lava flow around 100,000 years ago was dammed by glacial deposits to a depth of around 400 foot. The pool of lava took time to cool, with heat transferred to the rock below and the surface of the lava above. As the rock cooled, it contracted and cracked into the symmetrical spires that make up the cliff. 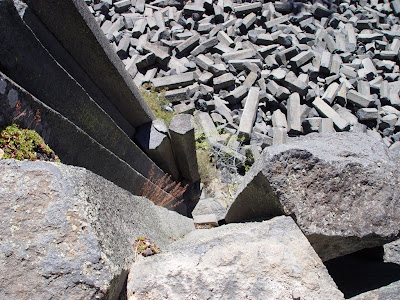 Somewhat more than half the columns have six sides, but the total number of sides ranges from three to eight. The best place to see the symmetry of the columns is from the top of the cliff where glacial scouring has smoothed off the top of the flow (and what a great example of glacial polish and striations!) 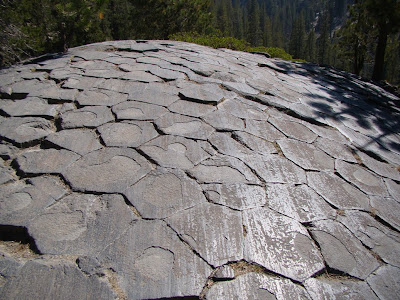 The pictures I posted on Tuesday (here and here) illustrated one of the interesting angles on the Postpile that don't show up in most of the pictures in brochures and vacation pictures. Many of the columns go off in strange diagonal directions (which is more normal in columnar jointing of most lava flows). Take a look below at a rather rarer view of the Devils Postpile from across the river (there is a trail somewhere over there, but I didn't find it. I was bushwhacking to get this shot!). Click on the picture to see a larger version (and the people sitting on the top for scale). The vertical columns are bookended by diagonal columns. 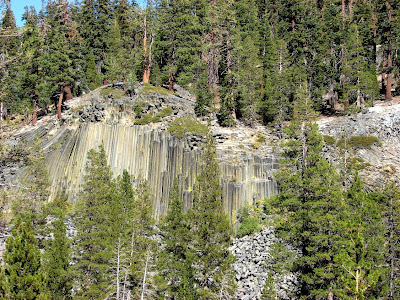 Crossing the stream (it was fall; this isn't recommended in the early summer when the river runs full!), a series of stunning diagonal columns are exposed at river level. These are seen by a small fraction of the visitors to the monument. 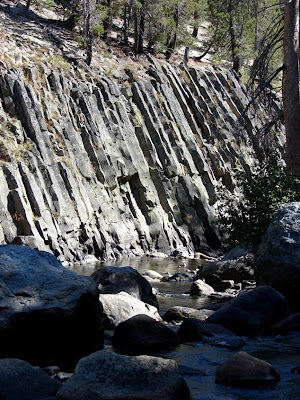 At the south end of the Postpile, the columns go in all directions (below). The pictures on Tuesday were taken on the flank of this side of the Postpile, where glacial plucking had broken and removed the tops of the columns rather than scouring them. Another ice age and the Devils Postpile could very well disappear entirely. 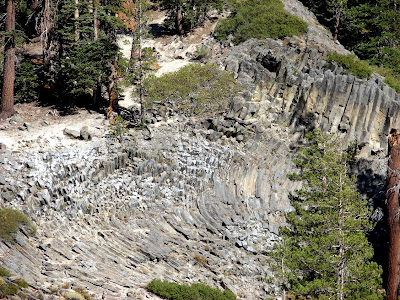 Devils Postpile National Monument is a fascinating visit for anyone interested in volcanism and glaciation. It lies over the crest of the Sierra Nevada from Mammoth Lakes along a drive that passes over Minaret Summit with a stunning (there's that word again, it comes up a lot when I explore the Sierra Nevada) view of the Minarets and Mounts Ritter and Banner, perhaps to show up in a future post. Because of limited parking and overcrowding, the park service long ago instituted a shuttle bus to ferry people from the Mammoth Mountain ski area during the summer months (including a fee). You can drive down if you have camping reservations, or in late September or October before snowstorms close the road. Fees are charged, but schools may be able to get fee waivers if they contact the Park Service or U.S. Forest Service prior to arriving (both agencies have jurisdiction). The Pacific Crest and John Muir Trails both pass through the monument. 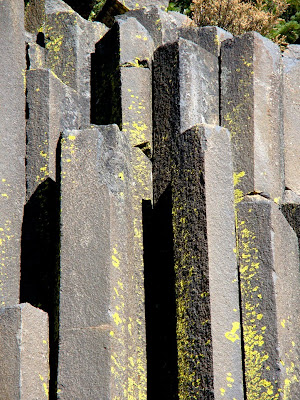 Some other very nice examples of columnar jointing can be found along Highway 108 over Sonora Pass (the Columns of the Giants), and in Yosemite National Park along the Tuolumne River near Glen Aulin.
Posted by Garry Hayes at 3:14 PM

I seem to recall that the first time (age 7?)you were taken to Devil's Postpile, you preferred to fish rather than climb up to see the top!