Time Beyond Imagining: A Scrambled Landscape in Unaweep Canyon 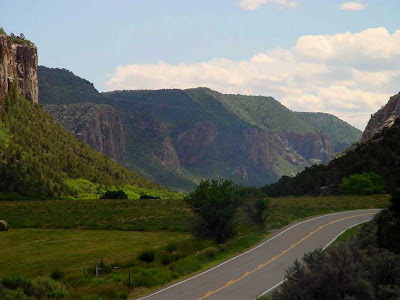 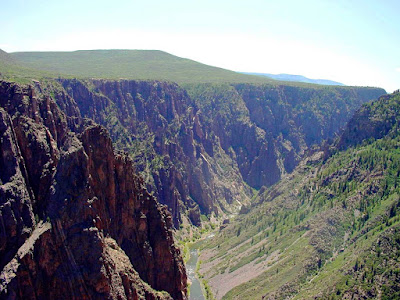 In our last exploration of the Cenozoic story of the Colorado Plateau, we were looking at a sort of mystery canyon, where a deep gorge had been cut into very tough Proterozoic rocks, but where no river exists today. The name of this beautiful canyon is Unaweep, which in the Ute language means "Canyon with two mouths". That's another view of the canyon in the top picture. To help explain what went on here, I have included a picture of another incredible place in the same region, Black Canyon of the Gunnison National Park. I wrote about the rocks of Black Canyon last year in this post, but had little to say about the location of the canyon itself. Like Unaweep, it doesn't make a whole lot of sense at first.

Notice how similar the two canyons are in certain respects. The main gorge is cut through the hard crystalline metamorphic rocks which date back to around 1.7 billion years ago, and there are softer sedimentary rocks along the canyon rims which have eroded back into a more muted topography. And then observe the big difference: Black Canyon is 'V' shaped, and Unaweep has a flat floor giving it more of a 'U' shape. A 'U' shape should cause even a basic geology student to think "glaciers", and glacial action would make a certain amount of sense. The ice ages ended only a few thousand years ago, and glaciers could have accounted for the shape of the valley and the fact that no obvious erosional agent exists in the canyon today. The region is elevated enough, and glacial action has indeed been suggested by researchers in recent times. I am unconvinced, though, because of the general lack of glacial features beyond and above the rim of the canyon. But it is a reasonable hypothesis.
On the other hand, the similarity of the canyons cannot be dismissed. If you removed the Gunnison River, and let debris fall off the cliffs into the valley, it would start to fill in. And what if the river were dammed in some fashion? Again, debris would fill the resulting lake, forming a flat valley floor. But how can a river disappear?
When canyons erode, they don't just get deeper. They get wider as a result of mass wasting of the canyon walls, but they also get longer as a result of headward erosion. The steepest part of a canyon system is often at the headwaters of the stream, and erosion tends to eat into the slopes of the mountains in an upstream direction. If a canyon is vigorously eroding into a mountain, it may actually intercept and divert drainages that were flowing in other directions. In other words, a river can steal the water from another river, an act of stream piracy. With the addition of more water from the stolen stream, the original river may erode even more rapidly, causing extensive changes to a landscape in a short period of time.
You can probably see where this is going: what about the beheaded stream? Bereft of water, the canyon downstream of the diversion no longer has a river of any consequence and erosion ceases. Mass wasting of the canyon slopes will start to fill it in, and one is left with a mysterious gorge with no river inside.
This is almost surely what happened at Unaweep Canyon. There is still a great deal of debate about the origin of the gorge; geologists are not actually sure which river once flowed here. Was it the Gunnison, the Uncompahgre, or was it actually an ancient path of the Colorado River? It is a neat little problem, and is well worth a visit if you are ever traveling in the country between Black Canyon and Grand Junction, Colorado. Follow Highway 141 south from the village of Whitewater to Gateway.

The location of the Gunnison River as it flows through Black Canyon is another mystery altogether! More on this soon...
Posted by Garry Hayes at 10:47 AM

So the U-shape we see in the photo is partly just a result of the combination of two shapes: the natually steep cliff above the angle-of-repose talus slope? I think there are probably a few canyons on the Columbia Plateau that look crudely U-shaped in that sense, but aren't as wide because they are currently more active. Will have to look more closely next time I'm up there!