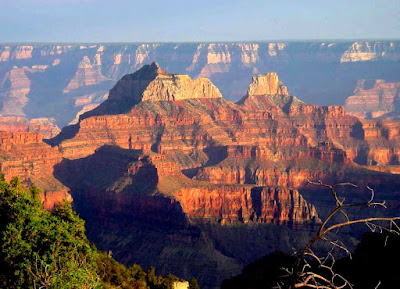 The latest Accretionary Wedge deadline has come and gone, and as usual I am a day late. A big thank you to Volcanista, our host this month, who has suggested the topic of our inspiration to enter the geosciences. I have talked about my inspirations a couple of times in previous posts, but I don't think I have told the whole story yet in one place.
Volcanista is certainly right about the idea that few people enter college thinking to major in geology or other earth sciences, and the reason is obvious: earth science does not receive the appropriate respect or emphasis as a science in the elementary and secondary school systems. In my ancient days earth science was simply not offered at all. Today in California, earth science is usually taught in ninth grade as kind of a bonehead science course. I am thankful to know a number of teachers who labor in the trenches, making the science come alive for their students. But by the time any of their students make it through their senior year, they have forgotten anything they loved about the science.
And so it was that I found my inspiration elsewhere. I, like any kid, was fascinated with dinosaurs and fossils, but as far as we knew in the 1960's, no one made a career out of paleontology. The dinosaurs were extinct, and so were the people who found them. They were historical figures from the late 1800's or the 1920's. It was in those days before Jurassic Park and paleontology rock stars.
When I was an eight-year-old there was a guy, Mr. Ritchie (I guess it makes me old, but we called big people Mr. or Mrs. in the day) down the street who had a really nice mineral collection. He would let the neighborhood kids look at his displays and I was fascinated by their symmetry and color. I spent hours digging in my backyard for crystals, and I especially loved a box of minerals left behind by a previous owner at our house. Even today I know there were sulfur and galena specimens in there because I recall the odor every time I work on the specimens in my lab.
Later in life (two years later), I saw the Grand Canyon for the first time, and as recounted in my blogpost a few weeks ago, I found my first fossils. I was hooked, but didn't know it yet. I still didn't realize that there was a science called geology that went along with astronomy and chemistry and those other cool fields.
High school was a fog and a near total loss as far as science was concerned (I did dissect a grasshopper and a pregnant perch, and probably am still adversely affected by the formaldehyde). I was in the scouts though, and learned to love topographic maps and orienteering. I also spent every available weekend hiking all over the mountains of Southern California and the eastern Sierra Nevada. I still didn't know I would be a geologist. It worked something like natural selection: I had the interest (crystals and fossils), and I had some of the basic skills (maps and compasses), I just hadn't found the field in which the skills and interests would be useful. Once I entered the correct situation, those pre-adaptations allowed me to survive! It happened when I entered the community college system in California.
My first quarter at Chaffey College included a class in Earth Processes with Rod Parcel (who passed away a number of years ago). I realized that maybe I was onto something. The next quarter I took a class in Earth Materials with Marlin Dickey, and at the same time I took a course on the geology of the Grand Canyon that included a week-long field trip into the incredible gorge. Some of my adventures are chronicled here and here. From the day I walked out of the canyon, I was hooked for good.
Given the tragic economic situation in California right now, our community college system is in a world of hurt, and I want to give a voice of support for how they support our state economy, and at the same time provide incredible opportunities for our citizens. They are not costly, and they provide an academic path to success that many people would otherwise miss if the system didn't exist. And so it was for me.
Posted by Garry Hayes at 7:39 PM

Good thing there were good teachers in the earth sciences to get some of us excited about geology. I had a teacher at Wenatchee Comm. college who excited me about all the sciences I hated in elementary and HS. Yet I think Grand Canyon can excite many people. I had a woman come to me after a geology talk yesterday who thanked me for making geology fun, a subject she didn't like.