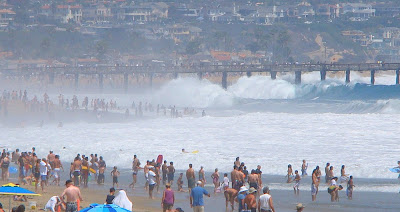 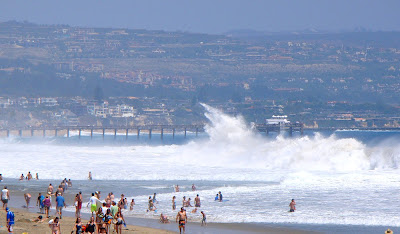 I'm in Southern California on a mini-vacation with the family, and the big news this week is the giant waves pounding the coast. A big typhoon in the southern Pacific (I think I heard Tahiti mentioned) is producing the energy that is generating 10 foot + waves. We were on the Newport Pier watching some monsters pound the beach at the Balboa Pier, seen in the background in these pictures. I'm astounded that so many people were in the water in these conditions. Red flags were up everywhere, and the lifeguards were probably having a nasty day.

The waves were not as violent beneath us on the Newport Pier. I think the wave energy is being funneled by the shape of the shoals just offshore, and their height is being accentuated by the backwash of water flowing off the beach, but still it was an impressive display of wave energy during a time of year when waves are usually quite gentle.

(Check my latest post for a more extensive discussion of why these waves happened)
Posted by Garry Hayes at 10:11 PM

Those waves are very impressive. I'll be the wave energy drew people into the water.

The wave energ reportedly came from a storm near New Zealand. Swells such as this usually come from either southern-hemi swells (as this one was) or tropical storms/hurricanes that form off the west coast of Mexico and trail off into the Pacific. It's lots of fun, provided everyone is safe and knows their limits.