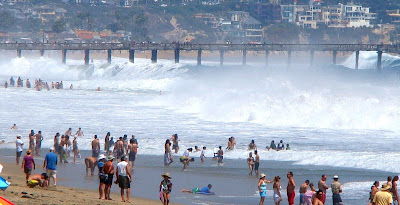 A follow-up to my previous post about the huge waves that struck the Southern California coast last week. I was privileged to see some of the intense wave action at Balboa and Newport, and it was a sight. Some of the waves looked like they were reaching the height of the pier, and surfers were delighted. Unfortunately, conditions were very bad for casual swimmers with radio reports of at least 200 rescues, and one person was killed when he got caught between the waves and the boulders of a jetty. Where did these unusually large waves come from?
Waves result from the application of energy to the water in some way. On rare occasions the energy is supplied by an earthquake or volcanic eruption, and disasterous tsunamis (incorrectly called tidal waves) are the result (update: you can read more about tsunamis in this new post).
Most of the time waves are generated by wind blowing across the surface of the water. We are all familiar with ripples resulting from a light breeze, and it may be hard to imagine wind producing 20 foot monster surf, but when the wind is blowing hard, and over a distance of many miles, that is exactly what happens. We know from movies and "Deadliest Catch" (and for some, from personal experience) that waves in the middle of storms are violent, large and unpredictable. The waves are capable of swamping and sinking boats and ships. But what about when the storm is past? Shouldn't the sea calm down, and the waves disappear?
Sort of. They disappear because the storm is dissipating, but waves are a form of energy transfer, and the energy is not stored. It has to move. The longer the wind blows and pummels the surface of the sea, the more the energy builds up and it starts to emanate outwards, sort of like ripples in a pond (well, exactly like that). The thing is, waves are not exactly physical objects. The swells are moving, but the water is staying in place, rising and falling in a circular pattern.
Winter storms generally produce the biggest waves along the California coastline. When I lived in Santa Barbara, the summer swimming was usually no more turbulent than a swimming pool full of kids. But when the big storms started to blow out of the Bay of Alaska, the surf got intense. I lived a third of a mile from the seacliffs, and some nights I could feel the force of the waves impacted the rocks.
So, why doesn't anyone surf in the open sea? That would be because the waves in the open sea are in the form of swells, which don't break or roll, they just simply pass by. The turbulence of the water extends to the depth of about half the wavelength (the distance between the crests of the swells). They are the cause of sea-sickness, though. It isn't until the waves hit the shallow coastlines that things change, and that is the whole dynamic of what happened in California this week.
When swells encounter shallow water the energy is compressed into a smaller space. Friction slows the forward movement of the base of the swell, but the top of the swell continues forward unimpeded and begins to stack up, very steeply on the side of the wave facing the beach. The water finally spills over, forming the breaker, and sending a pulse of water upwards onto the beach itself. What's different now is that the water is physically moving forward with great force, and the energy is expended against the cliffs, the sand, or the bodies of the surfers who have wiped out. The precise amount of energy is determined by many things, including the shape of the coastline, the orientation of the coastline, the arrangement of offshore islands, and the distribution of shoals beneath the surface.
So it was that a typhoon in the south Pacific Ocean around Tahiti generated swells two weeks ago that traveled thousands of miles across the ocean basin in a predictable pattern and speed. Their arrival in southern California was foretold and warnings went out to safety authorities. The red flags went up on the beaches, the surfers appeared out of nowhere, and the giant waves started to pound certain south-facing beaches. For a few people it was a nightmare and a tragedy, but for most it was a great spectacle (and one geo-blogger put up a couple of pics of the waves and saw his readership quadruple this week...thanks for the visits!).
Posted by Garry Hayes at 7:07 PM