Time Beyond Imagining: A Scrambled Landscape in Colorado 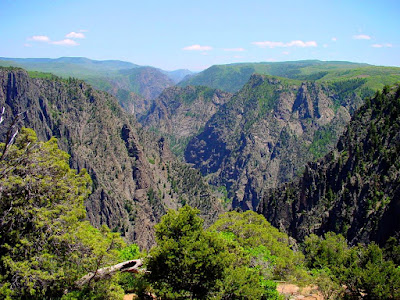 We are continuing a march towards the end our narrative on the geological history of the Colorado Plateau, one of the most unique regions on the planet. We've traversed nearly two billion years of strange events culminating in the beautiful scenery that we see today. In the last post, we were exploring a canyon that was missing a river. Today, we are looking at a river that is there, but shouldn't be.

Black Canyon of the Gunnison National Park sits in the western part of Colorado near the towns of Delta and Montrose. The park preserves a spectacular stretch of the Gunnison River where it has carved a canyon 2,000 feet deep, but which in places is only 1,300 feet across. The walls of the gorge are mostly vertical, having been cut through the very hard metamorphic and plutonic rocks of the early and middle Proterozoic. Other major rivers flow through the region, including the Colorado and Dolores. The thing is, no place on the plateau is quite like Black Canyon. It makes no sense at all.

The problem becomes apparent when one approaches the park from the south. The road travels up a long grade out of a wide open valley that looks like it ought to have a large river in it, but it doesn't. Gullies on the south rim of the canyon flow away from Black Canyon, not into it. The river flows across a major uplift, and traverses the side of a ridge instead of a seemingly natural route to the south. How can this be?

The previous post on Unaweep Canyon showed that rivers can abandon one canyon for another by way of stream piracy. Other events can divert streams as well, landslides being one example, and lava flows for another. Black Canyon falls in the latter category.

The original river flowed across a landscape composed of softer sedimentary rocks, thousands of feet above the present surface. As the landscape was eroded in the years since the end of the Laramide Orogeny, volcanoes became active in the region, forming the West Elk Mountains, and diverting the river southward. By the time the river encountered the hard metamorphic rock, the channel was permanently entrenched, and the river could only cut downwards. And cut it did, carving much of the present-day gorge within the last 1 or 2 million years. Glacial runoff vastly increased the cutting power of the river, perhaps five times the present day flow (which is controlled by upstream reservoirs).

Black Canyon is a fascinating place, in a region of full of interesting sights, including Colorado National Monument, the San Juan Mountains, and the Grand Mesa. The region is well-known for numerous dinosaur discoveries as well. Check it out!
Posted by Garry Hayes at 4:57 PM