Fire Down Below III - a Geological History of the Colorado Plateau 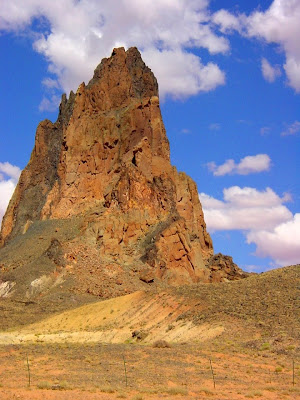 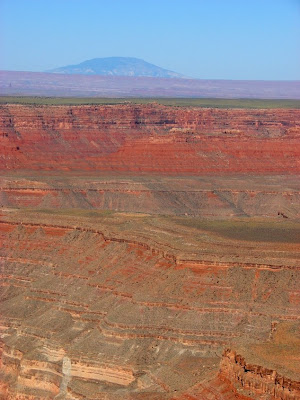 Another couple of perspectives of the volcanism that effected the Colorado Plateau between 20 and 30 million years ago.
A very accessible view of a classic volcanic neck can be had from Highway 163 a few miles south of the Utah-Arizona border near the town of Kayenta, Arizona. Agathla Peak (sometimes called El Capitan) is almost 1,500 feet high, and as can be seen in the photo on top is not composed solely of dark volcanic rock. Instead, much of the prominence is composed of large fragments of the surrounding sedimentary rock, shot through with dikes of darker volcanic rock that have more or less welded the pinnacle together. The surrounding rocks are shales and siltstones of the Chinle Formation.
The second photo is of Navajo Mountain, described at the end of yesterday's post. I had intended to include a photo, but to my surprise found very few of them in my archives. It strikes me that as I travel through the plateau country that the mountain looms in the background of nearly every part of our route. It comes into view soon after we leave Grand Canyon National Park out to the east. We drive south of the mountain as we approach Navajo National Monument and Cedar Mesa. It rises to the south when we drive through Escalante-Grand Staircase National Monument. And yet for all that, I hardly ever snapped a shot! But here is one from Cedar Mesa. The mountain is covered by sedimentary rock that has domed up over the volcanic rocks underneath.
Posted by Garry Hayes at 11:11 PM