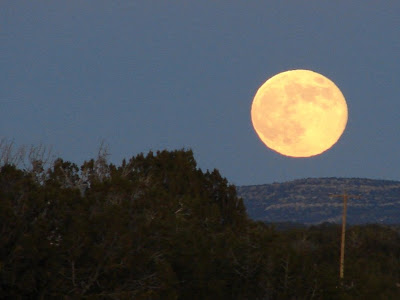 The moon rises over Black Mesa in northern Arizona during one of my trips there in 2007.

Today marks the 40th anniversary of one of those seminal events in American history, the landing of humans on the surface of the moon (and getting them back!). It truly was a form of national lunacy, that in the 1960's we would put three men in a small metal cylinder on top of a massive rocket and send them into space. How many of you feel comfortable riding in even a 1960's vintage car or airplane, much less a giant rocket? The lunar module was designed with barely more than slide rules and human ingenuity!

Acknowledging that many of you were not born when these events conspired, it was a different world. We were in open competition with the USSR, and we had choices to fight the war openly, or doing it by proxy, such as, maybe, racing to the moon. It's a pretty poor reason for going to the moon, but scientists of the time were pretty comfortable with the bargain. It felt a lot better designing rockets for space travel rather than for delivering nuclear warheads. And the rewards were legion, not just in scientific knowledge about the origin of the moon, but also all the advances in technology that had to be invented from scratch to make the whole thing work.

I was born the year the first satellite was shot into space. As a child, I was fascinated with telescopes, with models of spacecraft, doodling rockets in the margins of my school work, and watching the adventures of the astronauts as each new milestone was reached.

Somehow, when the moon landing was about to happen, my scout troop had scheduled our summer camp week! I wasn't going to see the great event on television. We wouldn't miss it though. Luckily, the camp staff managed to find a radio station with a signal that reached Circle B Scout Ranch in the southern Sierra Nevada, and they patched the event through the camp PA system. I remember wandering through the pinyon pines, looking at the moon, and listening to coverage as Neil Armstrong and Buzz Aldrin explored the first world other than our own.

Once we landed successfully, there was a new problem. For ten years, it was all about a race to be the first. It was about beating the Russians. Unfortunately, in the eyes of many people, the race was over, and we no longer needed to worry about getting to the moon, or much of anything else beyond our atmosphere. NASA started seeing huge cuts to their programs, and we pretty well lost our collective will to explore as a nation. It was enough that we got there first....

A lot of the people who cut their teeth on the moon shots stayed with the program, and the next decade included some incredible unmanned journeys that have continued the human journey. The Voyager missions stand out, with their incredible photos of Jupiter, Saturn, Uranus and Neptune, and their myriad moons. But there was far less interest on the part of the general public (and it is hard to give a ticker-tape parade to a satellite that was on the far side of Saturn).

And so today we have a real job to do, especially those of us in the teaching business. It isn't as easy to get kids excited about astronomy, and geology, and biology, and the other natural sciences, not when there are so many bells and whistles in the media, on their games, on their phones. But where would those cool gizmos have come from if not for space program, and the technological advances that came with it? And what is a life without that spark of curiousity that drives us to go further than we ever have before?
Posted by Garry Hayes at 7:06 PM

I miss those days - my brother and I designed (on paper) rockets that would go to other solar systems, rockets that were large enough to have tetherball courts, swimming pools, and everything a space-exploring child (at least) could want.

"It isn't as easy to get kids excited about astronomy, and geology, and biology, and the other natural sciences..." I'm not really sure I agree with that. With all the spectacular images from probes, space telescopes, satellite imagery, the ease of posting and finding spectacular imagery online, I think the availability of resources provides plenty of ways to stimulate and motivate students. I agree that all the devices and gizmos are a distraction, but I think the wider issue is that we have become an indoor, TV-centric society. Spectacular imagery is wonderful, but if the student doesn't somehow connect it to the idea that this is the real world because you have spent little time developing a connection to the real world (outside of TV and images), then as educators, we're going to fail.

There's a pile of literature about how students view classroom science as different from the real world- that they're learning rules about how things operate inside (but not outside) the classroom. But I'm not sure the root problem there lies in the existence or non-existence of a space race.

I love the slogan of NAGT and some other teaching organizations:

No Child Left Inside!