The Return of the Airliner Chronicles: the Biggest Mountains on the Planet 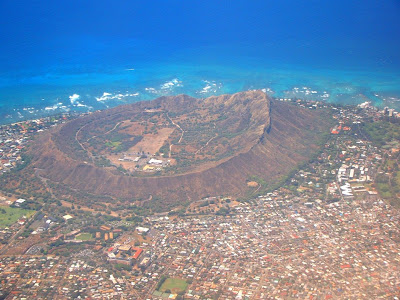 Back in the dark ages of 18 months ago, I ran a series of blogs on the theme of photography from the "perfect" photo medium of a scratchy glare-filled airliner window. Sometimes one can get lucky and get some decent geological perspectives, and of course, sometimes not! After grouching this morning about lousy airport experiences, we made it onto the plane, and for the first time in five tries I was sitting on the correct side of the plane to get a view of the islands as we made our final approach to Honolulu. So the airliner chronicles return!

The top picture shows three of the biggest and tallest mountains on the planet. From left to right they are Mauna Kea and Mauna Loa on the Big Island of Hawai'i, and Haleakala on the island of Maui. Tallest? Mauna Kea and Mauna Loa aren't quite 14,000 feet tall above sea level. But, they sit in 17,000 feet of ocean, and as such stand more than 30,000 from their base. And big? The gentle slopes of the volcanoes belie the sheer bulk of these mountains: some 10,000 cubic miles of rock make up the mass of Mauna Loa. With any luck, my students and I will "climb" to the summit of two of these mountains in the coming weeks.

The second photo is an iconic mountain from a different angle. It is Diamond Head, the tuff cone that overlooks Waikiki and Honolulu. Although the volcanoes making up the island of Oahu are long extinct (2.6 million years old), a series of minor eruptions 200,000 years ago produced a few cones along the coastal plains of the islands. Known to the original Hawaiians as Le Ahi, it got the current name from sailers in the 1800's who thought they had found the precious gems along the flanks of the cone. The sparkling crystals were actually calcite.

For what it is worth, Hawaii is rich in one gemstone: peridot. Known to geologists more commonly as olivine, it is a beautiful green mineral that is a main constituent of basalt, the volcanic rock that makes up most of the islands.

I am very much enjoying your travel blog so far and hope you can keep it up after landing on the islands! I LOVE aerial photos and take a lot of them when I fly. You've got some great ones in your airline photo blogs. I keep meaning to gather mine into one flickr set, and if I ever do, I'll send you a link and perhaps you can help me with the many mysteries to me that are in my set.

And, on a different subject, I am happy to know I was in the Grand Canyon with you when you decided to be a geologist! I'm impressed that you remembered Marlin's lecture about its origin.

Love the airplane shots. Are people actually living inside that cone?

The interior of the cone was a military fort for a time, but I think is now a visitor center of some sort

It is a tourist destination. To hike to the "top" of Diamond Head, which is, in Garry's photo, the highest point on the right rim, you start at the bottom left of center on the outside, walk up the road to the left, go through a tunnel that takes you into the crater, and cross the crater to get to the trail to climb to the top. It is supposedly of those "must do once" activities on Oahu, and after doing it a year ago, I would have to agree. It isn't a super easy hike, but all shapes and sizes of people in various attire and shoes do it, and it is amazing when you get to the top and look around and see how many people make it who you were sure weren't going to when you spotted them at the start!