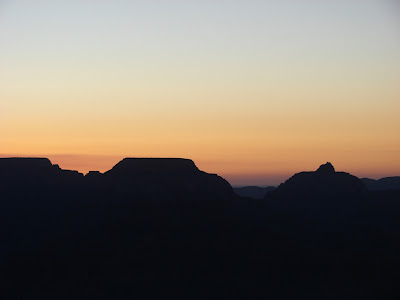 Lockwood has graciously consented to host the new Accretionary Wedge, and asks where we would want to go in the geologic past with a time machine. I could imagine many moments, including some from childhood (I really wanted to see living dinosaurs), but I come back to one thing: I think I most would like to see the moment the Grand Canyon began!

One could argue that it didn't just begin, but some imaginative hypotheses have been suggested over the years that include some form of stream piracy, where a Colorado River once flowed elsewhere, possibly into the Gulf of Mexico, or points northwest in the Basin and Range. A separate drainage system related to extensional stresses to the southwest evolved which eventually captured the river, and from there the giant canyon was carved in just a few million years.

I have many times imagined seeing that first trickle of water that spilled over the low divide, and how it would have become a torrent, and within hours the work of building a new canyon would have begun. Whether the hypothesis is correct or not, it is a wonderful piece of work for the imagination!
Posted by Garry Hayes at 1:39 AM

I'd join your time machine in a heartbeat to see the beginning of the Grand Canyon.

Thanks Garry! We're getting some really great submissions, and I hope to get this put together today.

Great to see your having good time Garry. This is David Wainwright. I hope you come back with lots of photos and .... *wink* items from the islands :)
You guys be careful. Make sure your not in target for N. Korea.
God speed and i'll look for your updates.
Dave in Modesto Ca.

Just got a log on name Garry, Talk to you later.