Pele's March to the Sea: Taking the Subway! 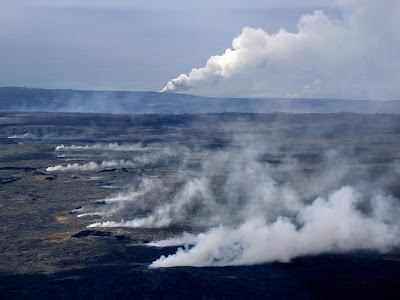 The lavas of Hawaii's Pu'u O'o emerge at the East Rift Zone around seven miles from the sea, and yet most visitors to the volcano only see lava pouring into the sea. Where are all the fountains and rivers of lava that grace every single tourist brochure about the islands? Well, it is not always dramatic that way, even though the eruption is the longest continuous eruption in recorded history. Most of the time the lava is flowing to the sea in lava tubes, a few feet beneath the surface where the lava has crusted over. The rock is an excellent insulator, so the temperature drops only a few degrees over the seven mile journey down the volcano.
Sometimes no lava is really ever seen at all, but we were quite lucky with our timing. As we flew over the Pu'u O'o cone we could see the numerous vents and windows marking the location of the tube system. At times lava breaks through to the surface forming miniature shield volcanoes called rootless shields (that's one of them in the foreground of the picture). The perspective of the picture is a bit difficult to perceive: I was flying right over the Pu'u O'o cone looking downslope towards the sea. The steam vents mark the downhill location of skylights in the lava tubes before they disappear over the pali, or coastal cliff. In the far distance are the two ocean entries at the coast, with the Pacific Ocean beyond.
Posted by Garry Hayes at 10:57 AM