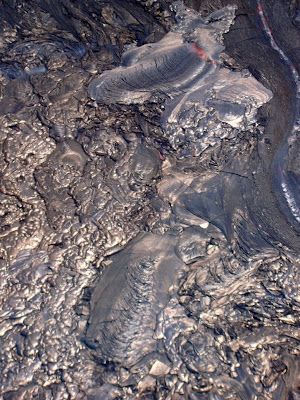 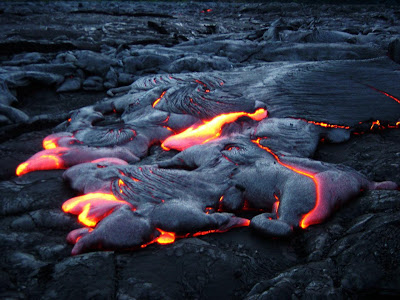 It's my 300th post! In celebration, I am throwing a pahoehoe party with some pictures from our recent Hawaii field studies journey (and one older picture from the pre-blogging days). If you have been following my last few posts, you have learned a bit about the current ongoing eruption of Pu'u O'o on the flank of the Kilauea volcano on the Big Island of Hawai'i. The flows have continued unabated for more than two decades, starting in 1983.
Pahoehoe is a term used by the Hawaiians to describe lavas with a smooth shiny surface, that reminded them of shark skin. We were lucky enough on this trip to witness a number of breakouts from the lava tube system that were forming pahoehoe surfaces. They were far up on the pali, and best viewed in the evening twilight, as can be seen in the top photo. Our view the next day was astounding, as our helicopter flew right over the breakouts just 1,500 feet above.

The center photo shows the active breakouts, with the main lava flow snaking along the right side of the picture, and two breakouts at the top and bottom. Despite the bright sunlight, the orange glow of the lava can be seen in places. The shiny, silvery appearance results from the thin coating of glass on the surface of the lava where it cools first. It is a blasted hellish surface.
We didn't have a chance to stand next to an advancing flow, but in 2002 I was able to get a photo of the front of a lava stream on the coastal plain. The lumpy surfaces expand as they fill with the hot basalt and then the lava squeezes out the edge of the bulbous masses. It is hypnotic to watch, and there is little to fear, since the only way it will get you is if you stand really still and let it surround you (for all I know, this is how some photographers I know will buy the farm!).
Posted by Garry Hayes at 7:23 PM

What a great look at the flowing pahoe.