Pele is a Capricious Goddess...Part Two 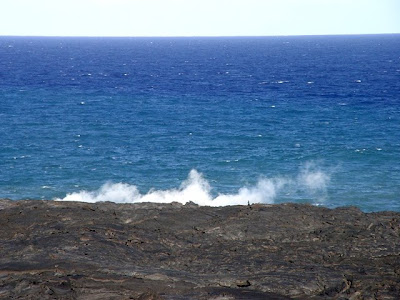 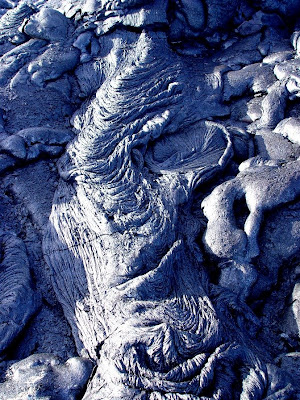 Continuing the story from the previous post, I had a second chance to see a volcano in action in 2004. I was the newly elected president of the Far West Section of the National Association of Geoscience Teachers, and for my first conference, I had persuaded someone to sponsor a meeting in Hilo. The volcano had continued to be active over the previous two years and was still going strong as the date of the conference approached. I was thrilled that a bunch of fellow teachers would be able to see an active lava flow!

As the final days approached, the activity started to wane. The HVO reported that blockages had started to occur in the upper reaches of the lava tubes that were feeding the ocean entries, and the lava flows were slowing to a trickle.

My daughter arrived on the island a day before me, and hiked to see the lava. It was down to a single dribble, no thicker than a pencil, falling into the sea.

The next day, I hiked out to the flow as fast as I could, and saw...well, I saw what you can see in the first picture above: steam from a recently ended flow. I searched desperately for any kind of small break out, any sign of active lava, but all there was was steam rising from cracks here and there. All I got for my trouble was a badly scraped arm and palm when I slipped and fell onto a day old lava flow. I was not aware until that day that fresh basalt flows are usually covered with a thin veneer of obsidian (volcanic glass) that gives the lava flow a silvery metallic appearance. The glass starts to break up right away, forming jagged shards that are like small razors lying about the surface.

Still, there is great beauty in new rock. The patterns in the pahoehoe lava surfaces are endlessly fascinating, and there is a grandeur in the barren surfaces of a day old lava flow. And absolutely sterile surface that has never before existed. A new beginning...
Next: Pele's gift
Posted by Garry Hayes at 11:58 PM