The Return of the Airliner Chronicles: the Biggest Mountains on the Planet, part 2 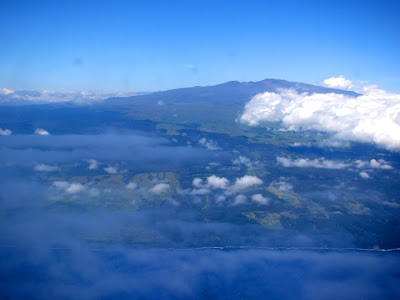 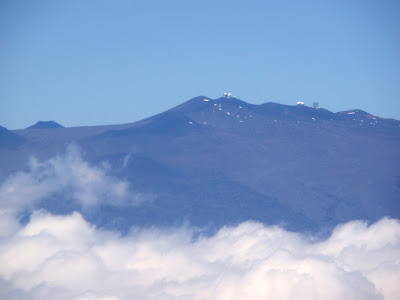 Took an island hopper from Oahu to the Big Island of Hawai'i, and once again was blessed with some great views of one of the world's great mountains. Interisland flights are short and the planes never quite reach the extreme altitudes of oceanic flights, so the summit of the mountain was directly out the window of the plane instead of far below.

Mauna Kea is one of the biggest mountains on the planet, rising some 30,000 over the ocean floor. 13, 796 feet of the mountain rises above sea level. It is a basaltic shield like Mauna Loa, but is in a later stage of development.

Mauna Kea is considered to be a generally dormant volcano, having last erupted 4,000 years ago. It lacks the summit caldera typically found on active shields like Mauna Loa or Kilauea due to some late stage eruptions of alkali basalts that filled any calderas and constructed dozens of cinder cones about the summit area. The mountain is notably steeper than nearby Mauna Loa as well.
Of all the forms of recreation on the islands, a snowball fight has to seem the least likely, but those white spots near the summit are snow fields! The mountain did in fact possess a glacial icecap during four of the Pleistocene ice ages of the last two million years. The ice was several hundred feet thick and covered around 3o square miles. Even today, permafost seals the ground beneath part of the summit, forming a small lake at 13,200 feet, one of the highest lakes in the United States.
As can be seen in the photos above, the summit of Mauna Kea stands above most of the island's weather, and being exceedingly far from any continental sources of air pollution, has some of the clearest, driest and most stable air for astronomical viewing on the planet. This fact explains the collection of sophisticated observatories scattered around the summit. A battle is raging over plans for additional telescopes, as those already constructed were built with little consideration for the environmental damage they inflicted, including a serious mercury spill. Furthermore, the mountain is a sacred place in native Hawaiian culture and is said to be the home of a number of deities. Many feel the summit region has been desecrated by the developments.
Posted by Garry Hayes at 2:01 AM

Snow in Hawaii sounds absurd, yet not at that elevation.