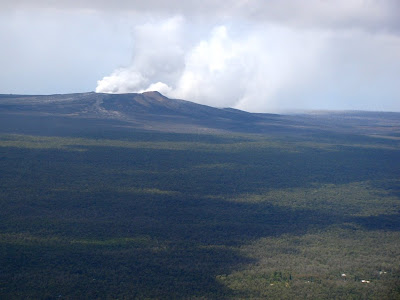 Pu'u O'o is a vent on the eastern rift zone of Kilauea volcano on the Big Island of Hawai'i. It is, and has been the focus of most of the volcanic activity of the last 24 years. I've been on the big island three times now, and until the other day I had never seen the source of all the lavas that have brought great interest and great misery to the region. The problem is that being a shield complex, the slopes of the volcano angle away from the vent in such a way that it is almost impossible to see the cone from anywhere, except as a plume of ash and steam in the sky. Although I am told that you can see the cone from a gas station parking lot in Glenwood, I had never found the place.

It took a helicopter flight to finally see the vent. From a thousand feet above the ground it wasn't hard to find the volcano at all. During active phases early on, the cone was much higher, but it collapsed and is now primarily a smoking pit. No lava is visible in the daytime, mostly steam, but it is clear where the lavas are going, as will be seen in some coming posts. It is a desolate blasted landscape in the area of the cone, a place that I wouldn't really want to visit up close, even as a geologist (we LAUGH in the face of danger!).
Posted by Garry Hayes at 8:25 PM