Pele is a Capricious Goddess...Part Four: What's Next? 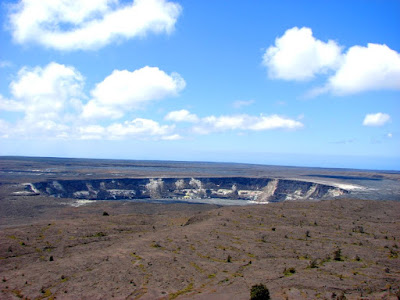 And now part four of my mini-series on the goddess Pele. The volcano goddess resides in Halema'uma'u, the pit seen above in a photo from 2006. I've arrived on the islands to prepare the way for my two dozen students, and we are set to visit Pele's realm next week. There has been a great deal of interesting activity of late, and I have hopes that we will be able to witness some aspect of Pele's fire.

But as I said before, Pele is a capricious goddess. For many months now, lava has poured from Pu'u O'o, traveling through the lava tube system for 6-7 miles before pouring into the sea. And in March, Pele got upset about something, because for the first time since 1924 she exploded in anger at Halema'uma'u, causing a pit to form in the area below the parking lot at the edge of precipice. Chunks of rock three feet across landed in the viewing area, where gifts are generally offered to the goddess. Lava is bubbling at the bottom of the pit, and vast amounts of steam and sulfur dioxide are pouring out of the vent.

Several weeks ago I contacted the Hawaiian Volcanoes Observatory about arranging a tour, and I joked about how the 24 year-long eruption sequence was going to end about June 5, because we were coming to the islands to look at the volcano on June 6.

I signed on yesterday to the daily report at HVO, and on the same day the glow in the Halema'uma'u pit was declining, AND the lava tubes had stopped pouring into the sea. Just like that. Just eerie, if you ask me.

The report this morning was better. Apparently a blockage in the tube system broke free, and the lava is flowing once more, and the glow in the Halema'uma'u pit is bright again. Message received. In any case, I know to be appreciative of the gift of Pele, whether we see actual lava flows or not. It is a spectacular sight to see, no matter what is happening when you arrive. Students, take note!
Posted by Garry Hayes at 1:35 AM

Wow, this is a great series of your adventures to Pele. Sure hope you and the students get lucky this year. Stay safe.