Rocks fall in Yosemite? I had no idea that could happen! 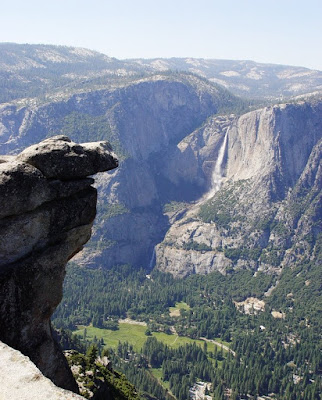 I had one of those nice "convergence" moments today...I was discussing mass wasting in my physical geology classes today, and this story showed up on the front page of my local paper concerning the danger of rock falls in Yosemite Valley.

There was a rather nasty mass wasting event in the valley last month, and it has been noted that there have been four times as many rockfalls since 1996 than in the previous 139 (although I seriously wonder if this is because more attention is being paid to such events in recent years). If this is a true increase in the number of incidents, then the speculation that human interference is a causitive factor needs to be investigated. Most of the attention centers on water use at Glacier Point, the spectacular overlook on the rim of the valley. Some of the recent events have occurred in summer when visitation (and therefore water use) at the point is highest. Other researchers, including the park geologist, disagree with the contention that water plays a part in the recent events.

The other controversy concerns the placement of cabin units in Curry Village where many of the incidents have taken place. Curry Village took a hit when flooding in 1997 destroyed dozens of cabins, and proposals to remove more from the base area of the cliff would decrease housing units even more.

It was a great teaching moment...except that only four of my students had looked at a newspaper this morning.
Posted by Garry Hayes at 10:43 PM