Rhyolite in the California Coast Ranges? And Happy Thanksgiving... 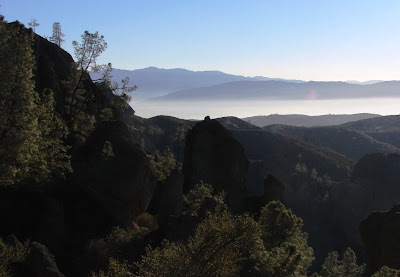 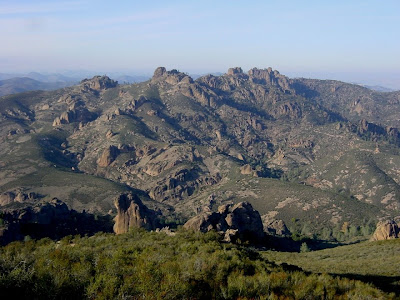 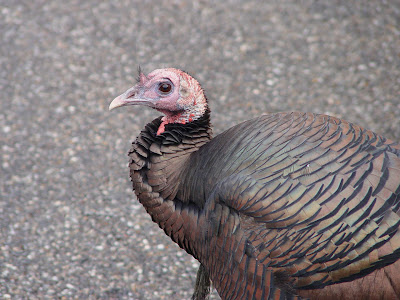 I only provided one picture of Pinnacles National Monument in California's Coast Ranges in my previous post, and it showed none of the scenery that makes the park a special place. So here are two views of the 22 million-year-old rhyolite composite volcano that was erupted, sliced in half by the San Andreas fault, faulted into a graben structure, exhumed by uplift, and eroded by water and wind and mass-wasting into a beautiful parkland.

The first photo is a view from the High Peaks Trail, a marvelous 5 mile loop through the heart of the park. The walk across the ridgeline is just stunning. In many places, footholds had to be scooped out of the rock to provide access, although the exposure level is not too frightening (nothing like Angels Landing in Zion, for instance). On a clear day, the far ridges extend forever into the distance, while the giant monoliths of rhyolite dominate the foreground. This hike, along with the trail to Delicate Arch, and the climb of Angels Landing, is one of my favorite hikes in the world.

The second shot is a view of the previously mentioned high peaks from the perspective of the south end of the park on the trail to the Chalone Peaks. The High Peaks Trail winds along the spine of the ridge in the center of the photo, and has connecting points to trailheads on both sides of the park (no roads cross the park, so one must choose to visit from the west or the east side).

The third photo is one of the wild denizens of the park, an old Tom Turkey. I have a feeling this bird would have issues with a certain recent vice-presidential candidate. I have seen a lot of wildlife in the park, include a huge flock of wild turkeys, four or five California Condors, huge numbers of woodpeckers, the standard deer and various rodents, and my favorite, a huge bobcat. The cat was hanging out near the edge of the campground near the road, and as we approached on the highway, what I thought was a feral kitty-cat seemed to grow larger and larger until I finally realized what it was and grabbed for my camera. Too late of course. And I can't help but look for the cat at the same spot every time I pass by during subsequent trips, camera ready in hand.

I hope everyone in the geoblogosphere has a fine Thanksgiving, even if you are not in the particular country that celebrates the day. Times are toughening up for many of us, but here's wishing that we all weather the storm, and that the job situation brightens for those of you who are between jobs and searching for employment. Best wishes to all of you.
Posted by Garry Hayes at 4:31 PM

p.s I am not sure any animal would appreciate the aforementioned vice-presidential candidate(and thankfully not elected!!) especially the hundreds of wolves she has given permission to be slaughtered by aerial killing in Alaska.

Happy Thanksgiving, and thanks for the Pinnacles photos. :)