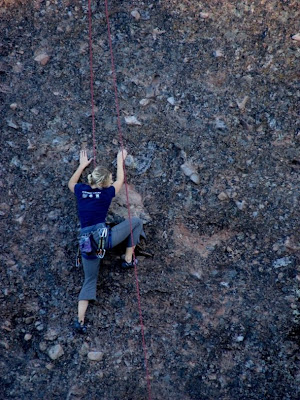 Breccia? You betcha! Looking for Detachment has a fondness for breccias, and mentions a few others who think likewise. My field trip season never seemed to end this year (that's not a complaint), as I had two lab field trips to see the Del Puerto Canyon ophiolite this week, and a Saturday field trip to Pinnacles National Monument in the California Coast Ranges. It was a great trip for breccia bloviating.

Pinnacles is a marvelous, if widely unrecognized little park about 30 miles south of the town of Hollister. It was established as a national monument in 1908 by Teddy Roosevelt for the tower-like peaks of rhyolite lava flows and breccias that are quite out of character with the normally rounded hills of the Coast Ranges. Those who sponsored the park for protection were unaware of the deeper geological significance of the park.

The great San Francisco Earthquake of 1906 brought worldwide attention to the San Andreas fault. Extending from the Imperial Valley of southern California to Mendocino on the northern California coast, it is one of the more extensive fault systems on the globe, and it has generated two major historical quakes (1906 and 1857), and a more recent "moderate" quake (Loma Prieta in 1989). Paleoseismicity studies have revealed dozens of major earthquakes during the last few thousand years.

Prior to the advent of plate tectonics theory in the 1960's, large scale lateral movements were not considered possible on faults like the San Andreas, though it was clear that the most recent movements had indeed been lateral. A seminal paper in 1953 by Hill and Dibblee argued that the fault had shifted hundreds of miles since Cretaceous time, a highly controversial assertion for the time. In the decades that followed, the San Andreas came to be understood as a continental transform boundary between the North American and Pacific Plates. Still, the fault researchers hoped to find an unequivocal piercing point that would allow a direct measure of the exact amount of movement on the fault.

The Pinnacles volcano was a rhyolite composite cone that happened to erupt on the San Andreas fault about 22 million years ago. The San Andreas ripped the volcano apart, and the two halves began moving apart, 10 or 15 feet at a time during large earthquakes. In 1976, V. Matthews demonstrated that the Pinnacles rocks were virtually identical to the Neenach Volcanics in the Transverse Ranges of Southern California. The two halves were separated by 195 miles!

The park has a lot of offer visitors. An extensive trail system bisects the park, including two sections that explore underground caves formed by boulders piling into the narrow slot canyons carved into the rhyolite. The vertical rock faces are a climber's paradise, as shown in the photo above. The rhyolite breccia (formed from volcanic mudflows, also known as lahars) makes for lots and lots of toe-holds!

I once was privileged to introduce the famous rock-climber Royal Robbins when he spoke to a group of geology teachers in Modesto. I made a point that geologists know a great deal about the properties of rocks, but how many of us stake our lives on our understanding of those rocks? Rock climbers do that every day...

Wow, great breccia - glad she's got a harness on!

Very true, I wasn't playing tricks with the camera, that rock face was absolutely vertical....