The Real Jurassic Parks: Where are the Dinosaurs? 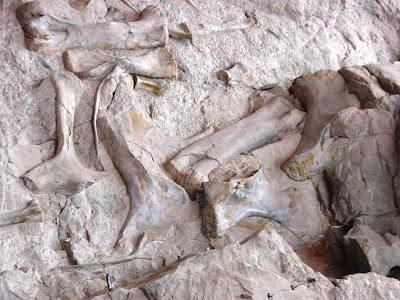 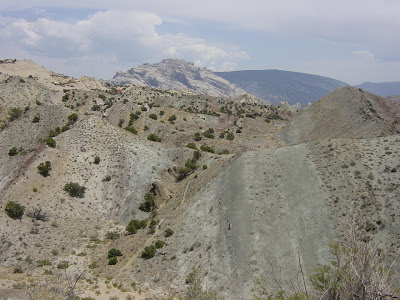 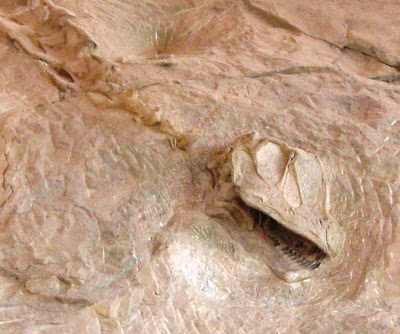 A great many parks on the Colorado Plateau draw their scenery from Jurassic-aged sediments, and have been reviewed on a fair number of posts in the last month or two (see here for a listing). I haven't said much about the dinosaurs themselves because I was waiting to talk about the ultimate dinosaur park: Dinosaur National Monument (a most creative name, don't you think?)

The park draws its fame for an extraordinary bone bed that was discovered in 1909 by Earl Douglass. Although thousands of bones were quarried and sent to distant museums, there was enough foresight among the powers-that-were to preserve hundreds of bones in place where they could be viewed in situ by the public. By 1915, 80 acres around the quarry were set aside as a monument by President Woodrow Wilson. The park was expanded in 1938 to include the spectacular gorges of the Yampa and Green Rivers, an area of some 200,000 acres. The park was the setting of one of the seminal battles in the nascent environmental movement in the 1950's when an effort to construct a huge reservoir in Echo Park in the heart of the monument was turned back (some details here).

The source of most of the dinosaur fossils in the monument is the Morrison Formation, one of the most widespread sedimentary units in the western United States. It is exposed over a region extending from Canada to New Mexico and from the Great Plains to Arizona and Utah, forming a unique badlands topography in shades of purple, red, green and yellow. The rocks reveal a vast river floodplain system that was occasionally mantled with volcanic ash from eruptions of stratovolcanoes to the south and west. A shallow sea existed to the north.

Rivers are wonderful settings for the preservation of fossils. Animals are drawn, of course, to river (fluvial) environments, and occasional floods will trap many of them. As rivers meander back and forth across the plains, point bars (inside loop of a meander) become collection points for animal carcasses. They can be quickly buried and preserved in such situations (the bone bed at Dinosaur NM is an example of this). The muds of the floodplains likewise can be a tomb for mired animals. In other situations, the muds served as nesting grounds for some species, and nests, egg shells and juvenile dinosaurs are counted among of the significant finds in the Morrison.

A phenomenal number of fossils have been found in the Morrison Formation, including dozens of species of dinosaurs, as well as smaller reptiles, pterosaurs, crocodiles, primitive mammals, fish, amphibians, and invertebrates. Many of the most best-known dinosaurs were discovered in the formation: stegosaurs, sauropods ("long-necks" to you parents out there), and allosaurs. Twelve species have been discovered in Dinosaur National Monument alone, including the Camarasaurus in the third photo above.

The clay-rich nature of the Morrison Formation has been the undoing of the most famous aspect of the park. The bone bed was exposed in a steep face that came to be protected under a three-story-high shelter. Over the years the soils have settled and the structure was seriously compromised, with cracks and fissures in the building that represented a danger to the staff and public. As a result, the building has been closed since 2006. Unfortunately, park visitation plummeted, and the budget situation at the park has deteriorated.

Because of the budget shortfalls, some political controversies have arisen in recent months over the management of Dinosaur National Monument and the role of paleontologists in the work force at the park. Rebecca at Dinochick Blogs has been on top of the issue, with the most recent flurry of letters here.

If you have the opportunity to visit the park, do not miss the 200,000 acres of the park that are not the fossil exposures! A vast plunging anticline dominates the park, and the two rivers that cross the anticline have carved deep gorges that are extremely popular with river rafters. A road climbs from the south boundary of the park to spectacular overlooks at Harpers Corner and above Echo Park.
Posted by Garry Hayes at 6:39 PM

Hi MJC. Thanks for the link! Sadly the jobs were cut and both of the staff people have moved on to new, different jobs.

I was afraid that would probably be the case. Thanks for the update. Of course, the institutions they are expecting to take up the slack in research are probably cutting back too. The park service really does need to take some responsibility for their resources, and I hope the new administration will find a way to make it happen.

So do I! I know that one of them is very happy in their new job, so that is a good thing. Hopefully in the future the NPS will be in a better position and will value their employees a bit more (just my opinion).

Keep up the good work! I have been enjoying your series!

I have been to DNM, and it is one of my favorites. Beautiful scenery, great geology, and few people. Thanks for the post, Garry.