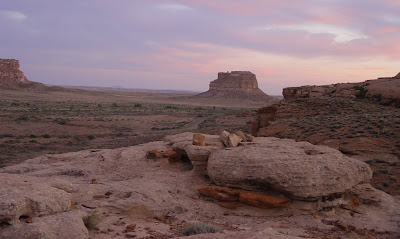 As any knowledgeable fifth-grader could tell you, few of the dinosaurs in the movie Jurassic Park had anything to do with the Jurassic Period. Most of the species in the movie lived during the Cretaceous Period, many millions of years later, including the velociraptors, tyrannosaurs, triceratops, and the ornithomimus herd. Offhand the only Jurassic dinosaurs I can recall from the movie were the massive brachiosaurs that occupied just a few scenes. The premise (from the sequels anyway) of the animals living in some kind of ecologically balanced paradise would be unlikely at best. The mixing of predator and prey species from long separated periods would lead to disaster, as most of the species would have no evolved defenses to predator attack methods. And of course, the whole "reconstitute a dinosaur" from old dinosaur DNA mixed with frog DNA idea is a real stretch anyway, although interesting results are coming from research with wooly mammoth DNA.

In any case, we continue onwards on our march through the geology of the Colorado Plateau. Cretaceous sediments are an important part of the Colorado Plateau sequence, and they reveal a changing world, including new plants (the angiosperms), a host of diverse new dinosaur species and many other animals. At the end of the period, the dinosaurs (and many other species) disappeared forever and a new world emerged in the Plateau country. A final transgression and regression of a shallow sea was followed by widespread deformation of the crust, and the rise of the region above sea level. The most recent era, the Cenozoic, our own time period, was beginning.

The Cretaceous formations of the Colorado Plateau are not as colorful as the Jurassic and Triassic sediments, but several national parks and monuments have been established in areas containing Cretaceous sediments, and in some cases the scenery is quite spectacular. Grand Staircase-Escalante National Monument and Capitol Reef National Park are two of the more striking examples, but other parks that are not really known for their rocks are also notable, including Mesa Verde National Park, Chaco Culture National Historical Park, Hovenweep National Monument, and Canyons of the Ancients National Monument. Important formations include the Cedar Mountain Formation, the Dakota Sandstone, the Mancos Shale, and the Mesa Verde Group.

Today's photograph is a sunset view of Fajada Butte in Chaco Canyon, one of the eeriest (but not in the scary sense) parks I've ever visited on the Plateau. The rocks are part of the Mesa Verde Group.