The Cretaceous Parks of the Colorado Plateau: the Cedar Mountain Formation 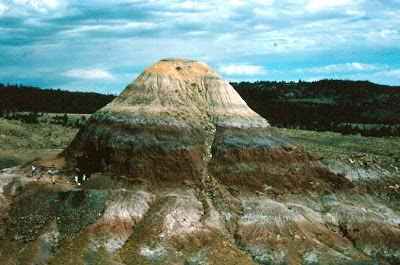 Well, yeah, except that it isn't the Cedar Mountain Formation, and it's not on the Colorado Plateau, and it isn't a park of any kind. If I may explain, the Cedar Mountain Formation is an exceedingly important part of the geological history of the Colorado Plateau, being the only representative layer in the region dating from the early/middle Cretaceous Period. It has also turned out to be a treasure trove of fossils with a rich collection of dinosaurian and other species preserving a time when animals were mixing or being separated from related species in Europe and Asia. So it is really important and all, and every geology field trip should stop and have a look at it and take lots of pictures and stuff. Except that I haven't done so on all of my many trips onto the plateau.

Extensive work on the Cedar Mountain Formation does not seem to have begun until the early 1990's (compare to the Morrison Formation, which was being excavated for dinosaurs in the 1870's). Some two dozen dinosaur species have been found in the unit, including several sauropods, iguanadons, troodons, one of the earliest hadrosaurs (eolambia), and my personal favorites, deinonychus, utahraptor, tenontosaurus, and a zephyrosaurus. At different levels in the formation these dinosaurs share affinities with European faunas while others are related to faunas from Asia. These connections reveal the severing of North America from the former and the linking to the latter during early and middle Cretaceous time.

So what's with the picture above? It is an exposure of the Cloverly Formation near Bridger, Montana. The Cloverly is nearly contemporaneous with the Cedar Mountain Formation, and many of the fossils found within it are similar as well. And I have actually been there, and participated in a dinosaur dig that was a defining life event for me and many of my students. So a few posts will soon follow, describing what we did there back in 1994. Please excuse the somewhat diminished quality of the photography, as these are scans of slides that were taken by a grossly incompetent photographer (me) back in the dark days before digital imaging.

These stories will also serve as my contribution to this month's Accretionary Wedge, hosted by Dave Shumaker at Geology News. The topic of the month is our favorite places to do field work, and was this ever it!

I'll make sure Dinochic reads this post, as it was a formative event in her life as well!