The Cretaceous Parks of the Colorado Plateau: the Final Discovery 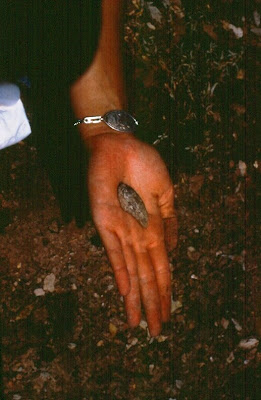 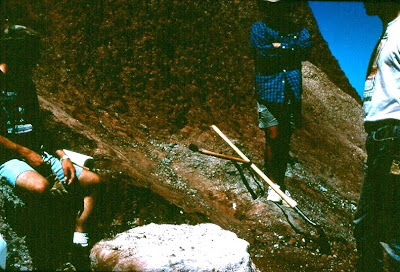 In the last installment of our dinosaur-digging story, we had finally come across evidence that dinosaurs had, in fact, actually lived during the time of the deposition of the Cloverly Formation; we had found deinonychus claws, and bones of tenontosaurs and anklyosaurs. In the final days on the site, we had become fairly sharp at picking out bone fragments on the slopes of the dig site, and two of our party found a fairly significant bone scatter a few yards away from the main quarry.

By working their way up the slope, they found where the bones were emerging, and we started another (much smaller) quarry, and uncovered several dozen bones in situ, of a creature we could not immediately identify. It was smaller than the other species we were expecting to find, and was thus sort of mysterious. We delineated the bone area, and started the process of protecting the exposed bone with "butvar", coating the bones with paper towels and covering the entire mess with plaster. By our last day on the site, we had constructed a giant plaster monstrosity.

The paleo-experts on the dig looked bemusedly at our work, and very politely waited until we had said goodbye and started on our way home before they started tearing off all the plaster and carving the rock mass into smaller parts. The dig was nearly a quarter-mile from the vehicle, and our plaster monster must have weighed 300 pounds! No one wanted to carry it down that hill!

The experts also were nice enough to report on what they found once the specimen had been hauled off to the Museum of the Rockies. Our find turned out to be numerous fragments of a Zephyrosaurus, a species that had been found only once before, and had been named on the basis of a few pieces of the skull, and some vertebrae fragments. We had found leg and claw elements, pieces of a skull, and vertebrae and rib fragments. The animal was a small bipedal herbivore. If your fifth-grader has ever heard of it, it is probably because the kid has a Dinosaur A-to-Z book, and zephyrosaurs are one of the few "Z" dinosaurs!

Images of the bones could be accessed for some time on the Museum website, but they were eventually taken down, so I wonder if they have reconsidered the identification of the specimen. If anyone wants to track it down, it was MOR #759. I would love to know what our creature is up to these days!
Posted by Garry Hayes at 12:56 PM