The Cretaceous Parks of the Colorado Plateau: the story of a Dino-Dig 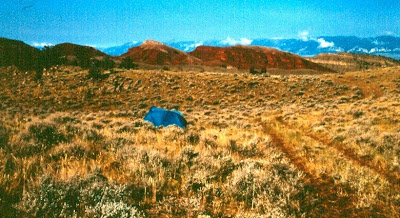 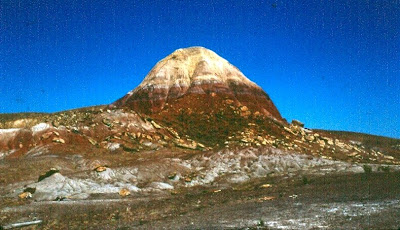 What was your favorite dinosaur when you were a kid growing up?

Before I distracted myself with a series of geo-memes, I was telling the story of my sole experience with a real dino-excavation, as part of my long-running "short" history of the Colorado Plateau. The first posts explained how we got invited to assist on the dig, and some of our adventures on the way to Montana. Today is an explanation of what we were looking for.

As far as I can tell, I am one of the old-timers of the geoblogosphere, so my childhood memories include T-Rex, stegosaurus, brontosaurus (yes, I know the name is wrong...), triceratops, and pteranodons (yes, I know the ptera-animals aren't dinosaurs, but I didn't know it at the time). As far as my five-year-old self was concerned, they all lived at the same time, fought with each other, were sluggish and cold-blooded, and died out because the superior mammals ate their eggs.
In the 1980's and 1990's, public perception of the dinosaurs was changing, due in part to the movie "Jurassic Park", but really because of the extensive work of numerous paleontologists, some of whom were talented at presenting their work to laypeople through such books as The Dinosaur Heresies (Robert Bakker), and Digging Dinosaurs (John Horner). A sort of dinosaur renaissance followed, and with a vast increase in research into the lives (and deaths) of the dinosaurs, the total number of dinosaur species was doubled.

One of the opening salvos in the new perception of the dinosaurs was a report by John Ostrom in 1969 about his discovery of deinonychus fossils in association with a tenontosaurus at a quarry near Bridger, Montana (the picture above is adapted from Ostrom's report; it was drawn by Robert Bakker, who was his research assistant for years). The velociraptors, popularized (and vastly enlarged) in the movie Jurassic Park, were actually no bigger than a german shepherd. The closely-related Deinonychus would have been a bit closer to the size of the creatures in the movie, although Utahraptor would have been even closer. At Ostrom's quarry, at least four individual raptors died along with the large plant-eating tenontosaur, leading to speculation that the predators had attacked the much larger creature together (and had died in the process). The result of Ostrom's analysis was that at least some of the dinosaurs were closely related to the birds, that they were agile and warm-blooded, and that some may have cooperated in bringing down prey. These were revolutionary and controversial ideas at the time.

So, what were we up to in 1994? We were going to help reopen John Ostrom's quarry! The distinctive hill is called the Shrine site (although we were also told it was named for a particular part of the original ranch owner's wife's anatomy), and is located in the badlands near Bridger, Montana. It is an exposure of the Cretaceous Cloverly Formation, which is related to the Cedar Mountain Formation on the Colorado Plateau, and is composed of sand and silt deposited on a muddy river floodplain. The idea of pack behaviour among dinosaurs remains a controversial subject, and by digging further into the side of the hill, we hoped to find more evidence concerning these predators of the early Cretaceous.
We couldn't have asked for a more dramatic setting. Besides the vivid colors of the nearby badlands, we had a skyline view of the high Beartooth Mountains that form the eastern edge of Yellowstone National Park. To the east rose the Pryor Mountains, and a few miles beyond, the Bighorn River (yeah, the Custer's Last Stand one). The picture of the camp above hardly does it justice (all that pre-digital photography with cheap cameras).

We met the professional crew, Geoff and Desmond, and a couple of amateur dino-diggers from the Bay Area, and starting looking over the quarry site. We knew our role; it was to remove the side of the mountain so the bone people could get to the bone layer with their brushes and dental picks. As Arlo Guthrie put it, we came armed with shovels and picks and implements of destruction. We set up camp, and made dinner. Work would commence the next morning....
Ostrom, J. H. (1969). "Osteology of Deinonychus antirrhopus, an unusual theropod from the Lower Cretaceous of Montana". Peabody Museum of Natural History Bulletin 30: 1–165.
Posted by Garry Hayes at 7:00 PM

That sounds really neat! And yes, I too remember T-rex (my favorite) and Brontosaurus (now something I'd have to look up). But if we had known about velociraptors and all the others, my brother and I would have had little replicas and would have built skeletal models of them!