The Cretaceous Parks of the Colorado Plateau: the Story of a DinoDig 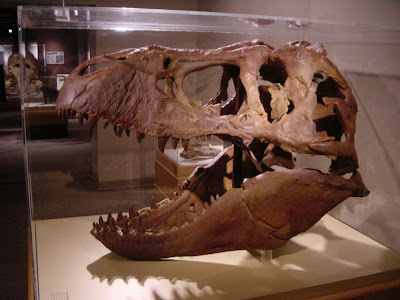 To continue our story of the Cretaceous history of the Colorado Plateau, we have taken a slight detour to the north to Montana, where the Cloverly Formation stands in for the Cedar Mountain Formation as the critical link between the late Jurassic ecosystems of the Morrison Formation and the later more widespread late Cretaceous formations. As explained in a previous post, this is because I've dug in the Cloverly, but have never seen (or at least recognized) the Cedar Mountain Formation to the south.

Lots of people participate in dinosaur digs, either as researchers, as students, or as paying volunteers through any number of commercial excavators. Our opportunity arose in 1993 when Jack Horner gave a lecture at Modesto Junior College on Tyrannosaurus rex (thus, the photo above). You may recall that at the time the movie Jurassic Park had pretty much re-ignited dinosaur-mania around the country, and Horner had gained some notoriety as a technical advisor for the film-makers. He had also garnered popular attention as the author of several great books about parenting dinosaurs (the Maiasaurs), and T-Rex (horrible predator or scavenger?). So his arrival at MJC caused quite a stir among my geology students, and they (and me too, I guess) hung around him like a bunch of groupies.
Over beer and pizza the next day, Mr. Horner suggested that we could help with one of his digs that coming summer in Montana, if we were at all interested. He stipulated that we could include 7-8 students, we would have to feed ourselves, provide all our camping supplies, get to Montana at our own expense, and that we would be diggers, not brushers and excavators. It would be hot and dusty or rainy and windy, or even snowy. There would be cows. Starstruck, we said yes, sounds fun!
Over the following months, the list of students crept up to 17 (lots of delicate e-mail negotiations), and they worked hard raising funds with burger sales and yard sales. Eventually they raised something like $5,000 to fund our expedition. So, early in June we set forth in our vans on the way to Bridger, Montana. The first day we slogged our way 550 miles to Angel Lake in the Humboldt Range of Nevada, and the next day traveled to Grand Tetons National Park, where we set up camp in the Gros Ventre Group Campground.
What happened that particular evening became one of our department legends for the ages. One our students had a knack for fomenting trouble with the powers-that-be in the Universe. On various previous trips he had speculated about what it would be like to get stung by a scorpion, and within a day, he had been (unwillingly) stung by a scorpion. At a stop, he asked if we would see any rattlesnakes. He stepped on one moments later. There was a karma that hung about Craig like a hangman's noose.

There was a discussion that evening at Grand Tetons in the twilight about whether we would experience any bad weather on our journey. The skies were clear that night with just a few puffy clouds about. For some reason, Craig looked at towards the heavens, raised a rock hammer towards the sky, and said "I dare the gods to make it rain!". I'm not kidding about what followed. Within ten minutes of his brash statement, our campground was enveloped in a violent storm, our vision obscured by thick blowing dust, and high winds were knocking down old cottonwood trees all around us. Fifteen minutes later the winds died, the dust cleared, and the camp was a shambles. Tents were ripped apart, and branches were down all over our camp. Our vans were undamaged, but a tree had crushed a van in the other part of the campground (people were in it, but were unhurt). We thought we had been hit by a tornado, but more likely it was a microburst from a storm that approached us unseen from the east.

Needless to say, Craig spent much of the rest of the trip muzzled....and this story will be continued. 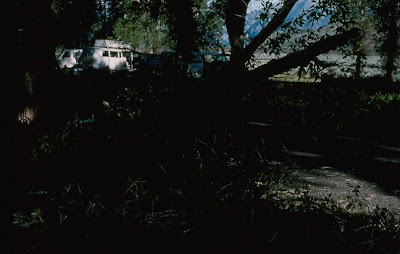