The Cretaceous Parks of the Colorado Plateau: the Dino-Digging Begins 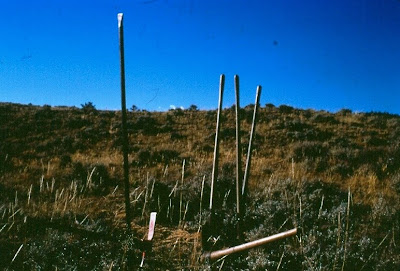 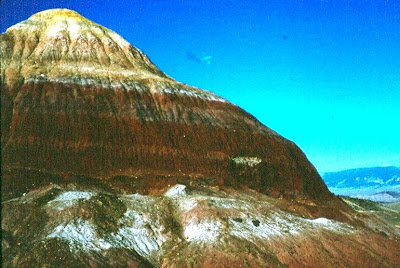 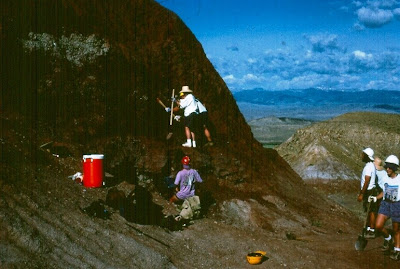 Continuing the story of our 1994 dino-dig, in which we learned the truth of uncovering new scientific knowledge. Morning broke on a beautiful warm opening day and our anticipation was at fever pitch. We were about to start digging for dinosaurs, at a famous site no less! The shovels and picks and implements of destruction were laid out in the quarry, and we started to attack the hillside.

The problem was obvious (see the center photo). The original dig site was on a gentle slope, but if we wanted to expose more of the bone-bed, we would have to cut into the steep slope above. Undercutting was an obvious danger (I'm sure Dave's Landslide Blog would concur), so we had to start out by removing rock from 10-15 feet above the bone layer. Much of the rock was relatively soft shale, but there was also a highly cemented sandstone layer that needed to be cut through as well. The next three or four days were spent doing hard, sweaty labor, with nary a fossil to be seen anywhere. Only 5 or 6 students could work the quarry at a time, so others tended to camp chores, or explored the area looking for bones sticking out of the cliff, but few of us had any inkling of what the bone would look like. There was the fun stuff...boulders knocked out of the cliff needed to be pushed over the edge of the ravine, which caused all kinds of satisfying carnage and chaos. There was a single radio station in the region, playing the same 10 songs and 5 commercials over and over and over, so a small radio provided the entertainment and a certain rhythm to the operation. It was hard work, but no one was complaining; we were digging dinosaurs, and if we worked hard enough, we were sure that we would find something approaching the perfection of the raptor in the early scenes of the movie Jurassic Park.

The days passed and we dug deeper and deeper into the slope, getting closer all the time to the bone-layer. I was also anticipating the arrival of my 8 year-old son. I didn't think he'd have the patience to sit through two weeks of this work, but I arranged with my brother to have him fly out to meet us and spend three days on the dig-site. What a great opportunity for a dino-loving kid!

The evening before his arrival, the storm clouds began to gather on the far horizon. I tried to sleep in a van that night, hoping the rain would hold off long enough that we could get a vehicle down the dirt track to the paved highway, and on to Billings and the airport. No luck, the rain started about eleven and continued through the night. I was worried that we wouldn't be able to get out, but we took the van with the highest clearance, and slipping and sliding we barely did get out. And then the rain began in earnest. I realized the problem was not getting out; it was getting back to camp with my son and brother. It rained like I've never seen rain before; inches of hail were reported in Billings. The storm continued for a two days without letting up. I picked up my family and we drove to Bridger and realized it would be impossible to return to camp until the muddy road dried a little. We checked into the only motel in town and hunkered down, and I worried about my students up there in the badlands. I splurged on a steak dinner that night and took a long hot shower in the motel.

It was an epic time in camp (as I would later find). It was too wet to try and cook much, so the camp subsisted on Top Ramen and bananas for breakfast, lunch and dinner. We had packed light, so there was very little reading material in camp; mainly there was a Brides magazine that a soon-to-be married student had brought. This was in the ancient days before electronic hand-held games or IPods. Mostly everyone sat in the vans and stared out into the rain and mud.

After 48 hours, the clouds cleared and the sun peeked out on a sodden landscape. Back at the motel we got out of our beds, stretched, took another shower, had a hot breakfast, and started up the road. Seven slipping and sliding miles later, we pulled into camp, and stepped out of the car with our coiffed hair, clean clothes, and full stomachs. In retrospect, that was probably the wrong approach towards reuniting with the crew....

But as bad as it was, the rain had changed our landscape in one important aspect; for nearly a week we had seen nary a bone fragment. That was about to change.
Posted by Garry Hayes at 11:51 PM