The Cretaceous Parks of the Colorado Plateau: Every Cloud has a Golden Lining 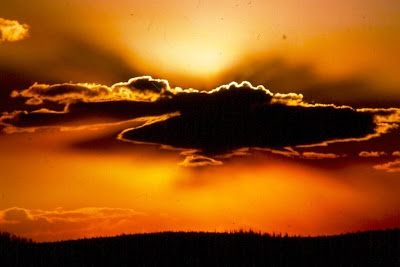 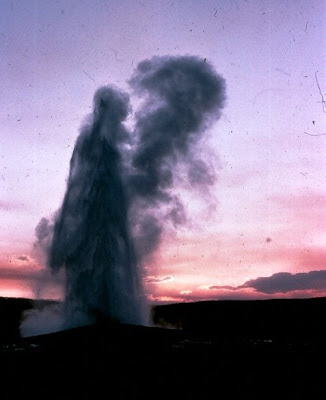 Following up on today's earlier post, we picked up the debris of our devastated campsite at Grand Tetons, and headed a few miles north to Yellowstone National Park. As if to make up for our rude reception the previous night, the rain gods gave us a tremendously beautiful sunset, and the geothermal gods provided an eruption of Old Faithful at the precise moment the sun hit the horizon. It felt magical.

The next morning, following what must have been the shortest, quickest field trip through Yellowstone National Park in geological field trip history, we made our way north to Bozeman, Montana, and visited the Museum of the Rockies, which has some of the finer dinosaur exhibits to be seen anywhere. I'm not sure if it helped our expectations to see the full mounted specimen of a deinonychus although it did give us an idea of what pieces we would be looking for at the quarry site. The early scenes of dinosaur digging in the movie Jurassic Park may have shaded our expectations a little bit, too. Intellectually, we knew that full complete articulated skeletons of dinos are very rarely ever found. Still, we were going to be digging in a place where relatively complete skeletons had been found in the past (more on this in future posts).

Somehow, distances on the maps of Montana don't quite add up to the distances on the actual roads in Montana, and we pulled into the Montana metropolis of Bridger (population 700) about four hours late to meet the quarry director (aren't first impressions the greatest thing?), and then followed the "road" for seven or eight miles to the quarry site. I use the term "road" only in the sense that the sagebrush was beaten down in such a way that an excellent tracker would be able to discern that a vehicle may have passed this way at some indeterminate time in the past. We crossed a creek, and floored the accelerator to make it up the other side, and pulled into camp....