Picture of the Day - A Great Outcrop, Part 3 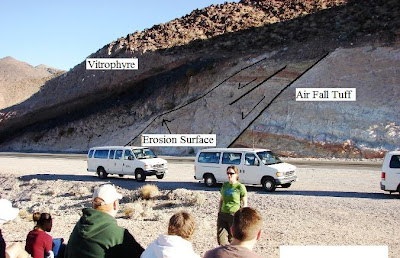 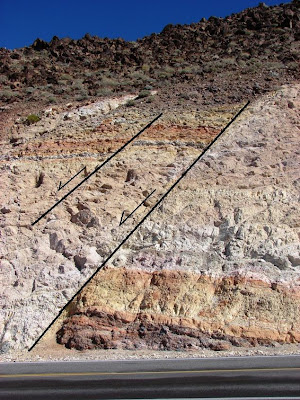 Apologies to Ron and Silver Fox for the delay revisiting last weekend's outcrop; all that death defying stuff distracted me. This is a well-known stop for many Death Valley field trippers at the south end of the Resting Springs Mountains just west of Shoshone. It is a marvelous site for teaching about faulting and aspects of volcanism. The prominent fault appears at first glance to be a classic reverse fault because of a tendency in one's mind to link the orange layers. The layer in the footwall (right) includes a dark lavender layer that is not present in the headwall, and thus the layers do not correlate. The smaller fault shows the correct offset.


The rocks in the outcrop are primarily air fall tuffs, although a megabreccia is exposed nearby. The rocks have clearly been tilted a bit.


Once my students finish looking at and sketching the faults, their attention is drawn to the dark layer to the left. It is a vitrophyre, a rhyolite ash flow that was so hot when it was erupted that it remelted to obsidian in the middle. A close inspection of the outcrop shows pumice pyroclasts that are progressively flattened towards the dark obsidian in the center of the flow. The upper part of the flow shows vesicularity as gases moved upwards during the cooling phase. Apparently the flow is in the original orientation; it was not tilted, but was instead plastered against a sloping hillside. The vugs contain interesting minerals, including zeolites and other silicates.


I wasn't so smart with this outcrop the first time I saw it. My instructor convinced us first that it was a reverse fault next to a coal seam, and then pointed out the inconsistency of the fault interpretation. Then it was hmmm? maybe not a coal seam, could it be a lava flow? Was it a dike? Oh dear, maybe we would have to figure out this whole thing ourselves.


Researchers much more talented then myself have published a tract about the outcrop that has been reprinted and is on sale at the Shoshone museum, which is also worth a stop if you are in the region. They have an excellent exhibit on the mammoths and other creatures that have been excavated in the region. Check it out!

Thanks for the update. Great, drawing on the photos like that. I might have had to draw this outcrop once upon a time on a field trip.