Do Geologists Have a Death Wish? 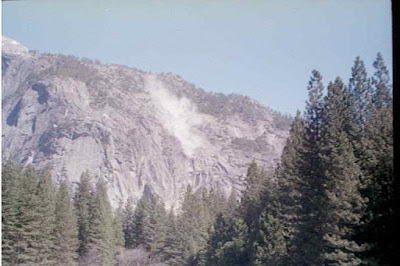 Something about having a huge pile of laboratory notebooks to grade on a tight deadline brings out the sloth in me, and suddenly every little distraction takes on monumental proportions, and I just have to share. I just looked at, courtesy of Geology.com (http://geology.com/articles/yosemite-rockfall.shtml), a spectacular series of photos of a 2006 rockslide at Elephant Rock above the Merced River on Highway 140 just west of Yosemite, taken by Herb Dunn (http://herbdunn.com/). I am trying to imagine the excitement of witnessing significant geological events in action, and Herb had a seat right behind the plate so to speak. Check out the photos, they are spectacular.

The photo above, taken by yours truly, is decidedly not spectacular, but it represents the only time I have seen a rock fall in Yosemite, despite something like 50 or 60 visits over the last 20 years. It happened on April Fool's Day in 2000, and I only had a cheap film camera at the time (my digital age began in 2001). And what did I do? Immediately drove as close to the impact site as I could so I could check out any damage.

Seeing Herb's viewpoint (he actually didn't have much choice, with steep slopes and boulders all around), I considered what happens when events like this happen to geologists. We run for a better look! A landslide, a volcanic eruption, an earthquake, it seems like we can't resist; while others run away in a wild panic, I imagine many or most of us will be scrabbling for a camera and running towards whatever is going on.


It isn't a death wish, of course. Many times (but not all), geologists may have a different understanding of the risks involved (the story of Maurice and Katia Krafft and the events at Galeras volcano in Colombia do provide a cautionary tale). I, for one, find earth processes in all forms endlessly fascinating, and we geologists have a perspective that tells us that what we see may be a once-in-a-lifetime event. At the very least, we want to share our excitement with others. Then again, maybe we are crazy... 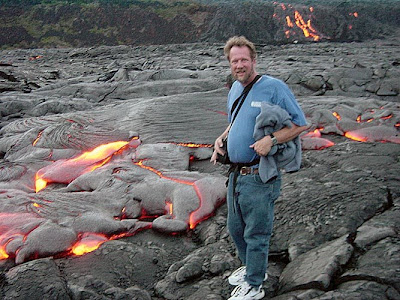 Ohh... this is so true! I once saw coming down a portion of post glacial landslide in Oetz Valley (Austria). What did I do? Run towards it, camera in hand :)

I don't think it's really a death wish, although I haven't gotten quite that close to molten basalt magma on Hawaii - merely stood on a week-old, still-hot flow.

I would like to be standing on Conway Summit when the Long Valley Caldera blows again - although that might not be far enough away. I'm counting on it erupting when the prevailing wind is blowing towards Nevada.

There's some weird part of our brains that sees cool & interesting rocks/events and overrides the "you are crazy to go there to take that picture" reaction. (Even the edge of the Grand Canyon qualifies here for some people.)

I've had similar pictures taken on Hawai'i - and I've always meant to take the "next picture -- the one where I'm moving away as fast as I can because my buns/feet/etc. are starting to get way too hot.

One of our local roads is closed due to flooding. (Snow melt is already beginning at low elevations.)

My first reaction was to drive on the closed road so I could go take a picture.

My second reaction was to remember that I had a four-year-old in the back seat, and maybe I should wait until he was in daycare.

Besides, the lighting would be better in the afternoon.

There is a medication you can take for that...

I have the same lava picture, except I was poking the lava with a 6' section of pipe. There's another one of me standing on one of the unstable benches, because that's where you had to go to see the lava exiting the pipe and flowing into the sea...

As a herpetologist, I also feel the need to throw caution aside. However, I end up grabbing animals that are either venomous or just plain bitey. It's the same desire that has put me in strong thunderstorms, near flash floods, and wishing I was in Yosemite when the rocks are falling. It's great to nature in action and close up.

When the Tornado sirens went off in Illinois during my grad school days, I ran up on a house roof with my camera while everyone else raced home to dive into the basement. I got some fantastic pix of a twister tearing a gash trough some nearby soybean and corn fields. Unwise? Perhaps, but as I had been a field geologist for several years prior I could see the wind direction favored my risk, as the storm was tracking away from my position, and in a hurry. I think we sometimes take risks that lifelong city dwellers or non-outside folks might find amazing, but seem normal and calculated to us.