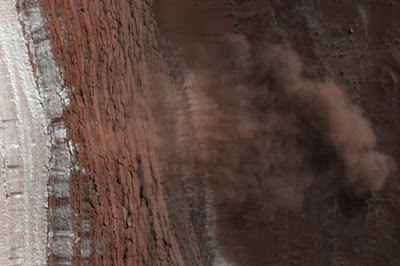 And speaking of being in the right place at the right time...the pictures coming back from the HiRESE Orbiter over Mars are just spectacular. Read the story of this photo at http://hirise.lpl.arizona.edu/PSP_007338_2640, and more than 2,500 other images were released today at http://hirise.lpl.arizona.edu/pds_release_mar_08.php. Thanks to Arizona Geology (http://arizonageology.blogspot.com/) for the links.

I am once again reminded of how lucky I am to be alive these days, and how little we knew of the Solar System in the days of my youth. I waited for months for the chance of getting a telescope for Christmas when I was 11 or 12 years old. It was a bit like Ralphy hoping for the BB gun in Christmas Story. As luck would have it, the arrival of my beloved telescope coincided with the flooding in southern California in 1969, and it was actually weeks before I was able to actually look at stellar objects with my new pride and joy. And truth be told, I was a little disappointed, since stars looked just the same in the telescope as they did with the naked eye. I could see moons around Jupiter, and Saturn's rings, but not much else (and I certainly didn't take these pictures, however fuzzy).

I was consumed with curiousity about the other planets in our neighborhood, and all the science books could offer were small fuzzy pictures of Mercury, Mars, Jupiter, Saturn, and Venus. Uranus, Neptune, and Pluto (the dwarf formerly known as the 9th planet) appeared as only dots of light. With the arrival of the first pictures from Voyager and all the other planetary explorers, our world was changed, and we are richer for it.

Everyday, the people who do science, and their technological advances provide us with beauty and fascination, as exemplified by the continuing saga of the Mars Rovers and the Orbiters. Thanks to those who persevere in the face of budget cuts, and keep up the great work!
Posted by Garry Hayes at 11:07 PM

A pretty rad post, Geotripper - makes me wonder about the water-driven versus dry-grain flow driven geomorphic (areomorphic?) features on Mars.