Tourmaline Dreams, and the National Association of Geoscience Teachers 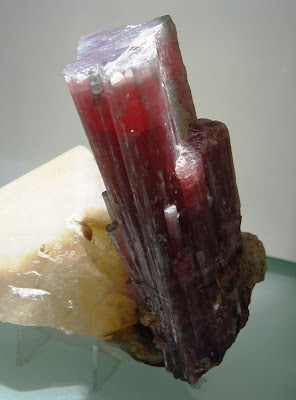 Off on another trip this weekend, to the Spring Conference of the National Association of Geoscience Teachers, Far Western Section, hosted this year by Palomar College and CSU San Marcos. We will be participating in a number of field trip choices along the southern California coast, and up in the Peninsular Ranges. The highlight for me will be a tour of a working tourmaline mine in the Pala area.

Tourmaline is a beautiful complex silicate gemstone. The highly variable composition results in a rainbow of colors, sometimes in a single stone. One of the more famous is the "watermelon" stone that is green on the outside and bright pink on the inside. It often occurs in trigonal prismatic crystals. The tourmaline occurs in pegmatite veins associated with batholithic rocks of the Peninsular Ranges. During the early part of the last century, the stone was highly desired in China, although demand dropped off later on in the 1920's. Some of the gemstones are nothing short of spectacular, weighing several pounds, and reaching a foot in length.

The National Association of Geoscience Teachers is a great organization to meet with other geology teachers, and to see some really wonderful parts of the western United States. During NAGT conferences I have had the opportunity to walk around the deepest parts of open-pit gold mines, explore active lava flows, search for fossil fish in old lake beds, and to visit some of the most beautiful places I can imagine. We are always looking to add new members...the Far West Section, covering California, Nevada, and Hawaii has two conferences every year, and offers an extensive collection of geological road guides from past conferences. Our Fall 2008 will be hosted by CSU Chico, and will have trips exploring the northern Coast Ranges and the Lassen Peak region. Other sections around the country have similar programs available. The national NAGT publishes the Journal of Geoscience Education, and has extensive web resources available.

Check it out! The Far West Section website can be found at http://nagt-fws.org/ and the national website is at http://www.nagt.org/
Posted by Garry Hayes at 11:40 PM

Cool! It looks like I qualify for membership. Maybe when my ship comes in...

Only if we had found a piece like that over the weekend. We can't give up our dreams yet, maybe next time....