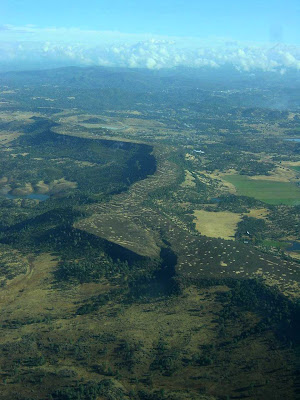 OK, that didn't take long, and having seen what Silver Fox, Kim, and Ron Schott are capable of, I am not surprised. Congratulations! Also, I'm glad you all answered quickly, because here is the picture I really wanted to post in the first place. I don't know a great deal about Kansas, but I am jealous of Kim's outpost in the Rocky Mountains (having visited the region quite a few times), and I really miss central and eastern Nevada (Silver Fox's domain) from my days at the University of Nevada, Reno. But I do live near a lot of wonderful geology; the Sierra Nevada foothills are rich with metamorphic terranes, batholithic intrusions, volcanic rocks, and overlying sedimentary sequences. The previous post is a ground level view of the Stanislaus Table Mountain, a striking example of an inverted stream. The latite eruption (I believe this is the type locality for latite) emanated from vents near the crest of the Sierra Nevada at Sonora Pass and the Dardanelles, and flowed more than 40 miles through rolling hills and wide, relatively shallow valleys. The flow dates to around 9 or 10 million years ago.

Increased river gradients caused by the uplift of the Sierra Nevada led to the erosion of the softer rocks around the lava flow, causing the former stream bottom to stand out as a ridge. I had the opportunity to fly over the mountain a few years ago, and the view from above is striking. I have a more extensive collection of photos from my flight at http://geotripperimages.com/Links_We_Like/Stanislaus_Table_Mtn.htm.

Oh, and in tribute to my primary source on Table Mountain, (the Centennial Field Guide Volume 1: Cordilleran Section of the Geological Society of America, Article: pp. 269–272 Abstract PDF (666K) Table Mountain of Calaveras and Tuolumne counties, California by Dallas D. Rhodes), I offer the following poetry from Bret Harte....

The Society upon the Stanislaus

I RESIDE at Table Mountain, and my name is Truthful James;I am not up to small deceit or any sinful games;And I 'll tell in simple language what I know about the rowThat broke up our Society upon the Stanislow.
But first I would remark, that it is not a proper plan
For any scientific gent to whale his fellowman,And, if a member don't agree with his peculiar whim,To lay for that same member for to "put a head" on him.
Now nothing could be finer or more beautiful to see
Than the first six months' proceedings of that same Society,
Till Brown of Calaveras brought a lot of fossil bonesThat he found within a tunnel near the tenement of Jones.
Then Brown he read a paper, and he reconstructed there,
From those same bones, an animal that was extremely rare;
And Jones then asked the chair for a suspension of the rules,
Till he could prove that those same bones was one of his lost mules.
Then Brown he smiled a bitter smile, and said he was at fault,
It seemed he had been trespassing on Jones's family vault;
He was a most sarcastic man, this quiet Mr. Brown,
And on several occasions he had cleaned out the town.

Now I hold it is not decent for a scientific gent
To say another is an ass,—at least, to all intent;
Nor should the individual who happens to be meant
Reply by heaving rocks at him, to any great extent.
Then Abner Dean of Angel's raised a point of order, when
A chunk of old red sandstone took him in the abdomen,
And he smiled a kind of sickly smile, and curled up on the floor,
And the subsequent proceedings interested him no more.
For, in less time than I write it, every member did engage
In a warfare with the remnants of a palæozoic age;
And the way they heaved those fossils in their anger was a sin,
Till the skull of an old mammoth caved the head of Thompson in.
And this is all I have to say of these improper games,
For I live at Table Mountain, and my name is Truthful James;
And I 've told in simple language what I know about the row
That broke up our Society upon the Stanislow.

Have a good week!
Posted by Garry Hayes at 6:49 PM

A great picture of Table Mountain - I've never seen it from that aspect. We took a few field trips into California from MSM; Slemmons led at least one of them. Also, I grew up in Sacto (partly), and we took our own field trips into the foothills back then, my geologist Dad leading. Table Mountain is locally famous (at least) - but I wouldn't have remembered the name, just the latite.

And thanks for the poem.

Spectacular! Thanks for sharing. This landform has similarities to sinuous ridges on Mars, many of which are interpreted to be inverted channels.