Picture of the Day - Ig or Sed Explained 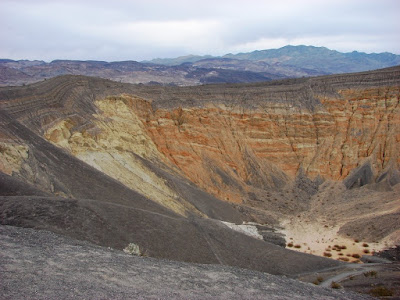 Silver Fox and Ron are both right, the weekend's photo was of air fall volcanic deposits that mimic sedimentary layers. The locality is the Ubehebe Craters at the north end of the paved road in Death Valley National Park. The craters are a dozen or so maars, or phreatic explosion pits that originated within the last few thousand years (some researchers have suggested the last few hundred years). Basaltic magma, rising along fault zones at the north end of Cottonwood Mountains encountered groundwater (phreatic water) in the older clay-rich lake sediments, causing the water to flash to steam. The dozens of explosions were accompanied by ground surges of debris that formed the distinctive layers. Since years or decades or centuries separated individual eruptions, the layers were gullied by erosion, and subsequent eruptions coated the older rocks, causing an apparent angular unconformity (which I found to be the most interesting aspect of the photo). The sloping layers actually represent overlapping cones. I try to get my students to map the order of the craters that are visible from a walk along the rim. It is bigger than it seems...there are people standing on the bottom of the crater in the photo above. The biggest crater is 700 feet deep and nearly half a mile across. 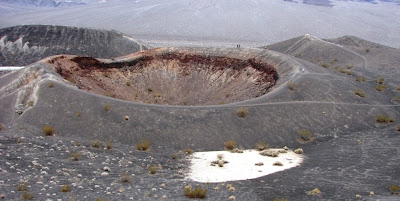 The photo above shows one of the smaller craters with the dark rim of debris layers and a small bit of gullying on the left side. People on the rim serve as scale.

It's a great place to visit, but watch out for the persistent winds!

Well, it seems a little more igneous than sedimentary! The unconformity is very interesting - I was wondering what caused that pattern.

Another topic: when you installed your map widget, did you have to mess around with the template html? I tried inserting through the blogger add html element. Couldn't see the map. Have given up for now.