A Day at Yosemite in the "Spring": The Iconic Rocks 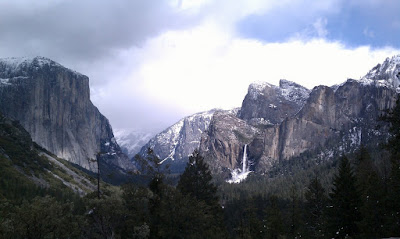 As I pointed out in yesterday's post, living near a spectacular, photogenic place like Yosemite means that putting a digital camera in hands like mine is dangerous, at least to hard drive memory storage. No matter how many times I stand at a place like Tunnel View (above), I take the same pictures from the same spot.

I might make the argument that every moment at these places is different, and that would be true; the presence or absence of clouds, the season, the time of day, these are all factors in the interest of a picture. So it is, that for the 38th time, I took digital shots of the iconic rocks of Yosemite Valley. Enjoy!

The most famous view of Yosemite Valley quite probably is that from Tunnel View, where Highway 41 emerges from the darkness to reveal a sweeping panorama of El Capitan, Half Dome, the Cathedral Rocks, and Bridalveil Fall. I liked the view on Saturday because Half Dome was obscured by clouds. It's not that I don't like Half Dome; it's just that when expected parts of the scene are missing, the emphasis of the photo changes. 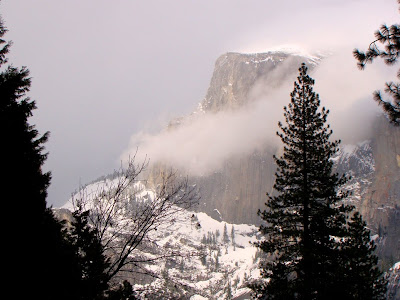 Half Dome spent the whole day Saturday peeking from behind clouds. I like it that way; drifting clouds provide a sense of the immensity of the dome. It rises more than 4,000 feet above the valley floor. Half Dome is the product of the release of pressure as the rocks were exposed by erosion. The rock expanded and fractured parallel to the surface, a process called exfoliation. Edges and corners break away over time, leading to the dome-like shape. The steep cliff formed along a vertical fracture called a joint. For the record, when viewed from other angles, it becomes clear that the dome is somewhat misnamed. If anything, it should be called Four-fifths Dome. 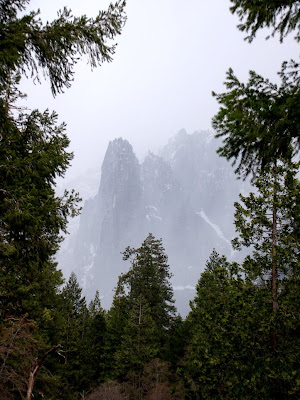 Sentinel Dome is the result of vertical jointing. I liked the way the snow flurries were whirling about the cliff faces, giving the cliff a more mysterious aura. 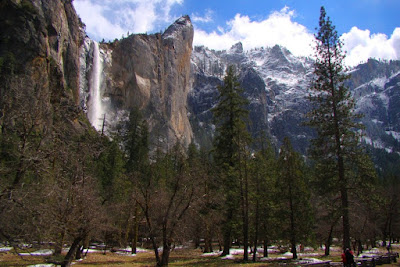 Storm clouds covered the eastern end of Yosemite Valley, but the sun was occasionally breaking through at the western end. In the picture above, we have Bridalveil Fall and the Leaning Tower. The source of its name should be obvious.
We are three weeks into spring, but it is obvious that winter still governs the landscape. There had been several inches of snow the previous night, and our van was constantly clobbered by clots of snow falling off the trees. 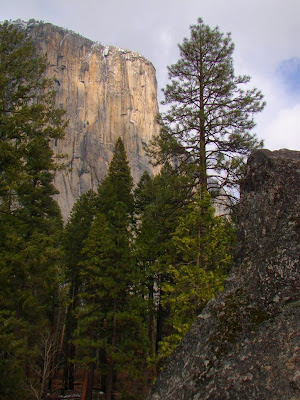 El Capitan is a three thousand foot high cliff of relatively unjointed granite. El Capitan granite is composed of quartz, potassium feldspar, and biotite mica. A slide a few years back dropped some chunks of the granite onto Highway 140, allowing us to see what the rock looks like up close. The casual visitor almost never sees such clean fresh surface because it turns out that there is an entire other world within a world in Yosemite, as well as almost everywhere else. That will be the subject of another post. 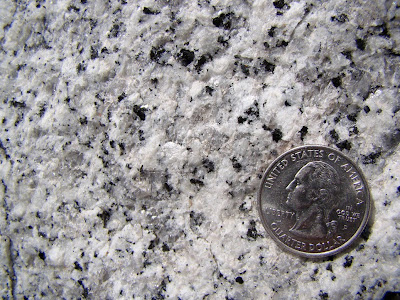 No matter how many times a photo is taken in the same place, it's always a different Now. Love these cloudy views.