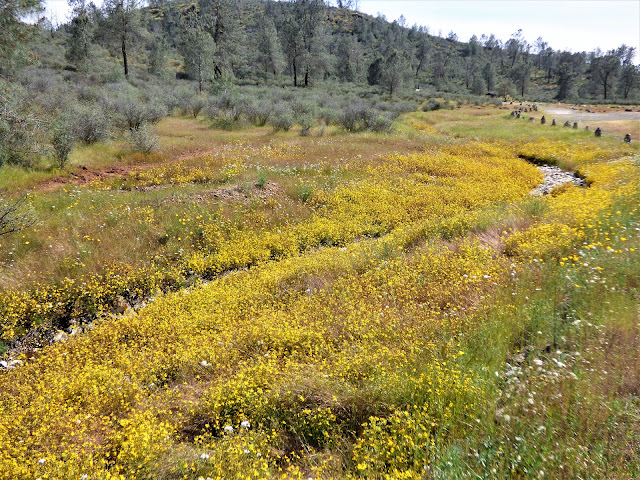 With some careful selective editing one can make it look like the superbloom is continuing in the Red Hills Area of Critical Environmental Concern, but alas the bloom is beginning to fade. We drove up there today and I was standing in this field of Monkeyflowers when a car pulled up, looking for the Red Hills. I was said he was in the middle of it and he seemed mildly disappointed, but his family jumped out for some pictures anyway. The flowers were there, concentrated along Six-bit Creek, but it just wasn't the same show. Was I disappointed? Of course not!
One thing that changes as the flowers fade is that the rocks become more visible. If you haven't seen some of my posts in the past, the Red Hills Area of Critical Environmental Concern (only a bureaucrat could come up with a name like that!) is a landscape of about 7,000 acres in the Sierra Nevada foothills just west of the village of Chinese Camp. It exposes ultramafic rocks (serpentine and peridotite derived from the Earth's mantle) with a chemistry that precludes the development of fertile soils (they lack some critical nutrients, but include a few toxic elements as well). As a result most normal foothill species cannot thrive. Because of the relatively barren look of the place, it was abused for years as a motorcycle riding area and dumping ground. But hard soil conditions force plants to adapt. It turned out that the Red Hills sheltered dozens of serpentine tolerant plants that are rare elsewhere, and some of the plants are endangered, in part because their habitat is so limited. 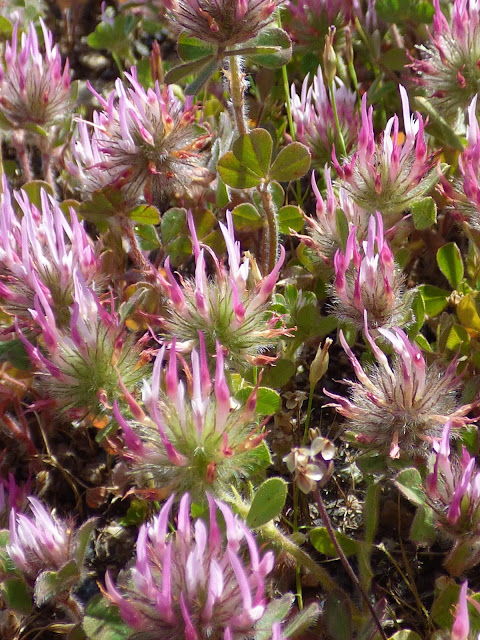 Volunteers cleaned up the garbage, and the Bureau of Land Management began developing trails and a picnic area along with interpretive signage. For most of the year, the rocks lie exposed to the intense sunlight, but during the rainy season, the area can explode with unique wildflower species. We caught the early part of the season in March (the Alpha), and today we were witnessing the end (the Omega). 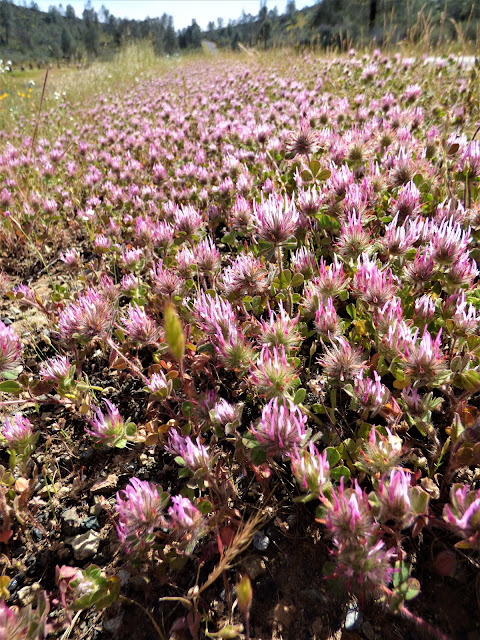 I'm an amateur at identifying birds, but I've gotten better at it and can identify most of the common ones in my area. But with wildflowers I'm hopeless. My memory for wildflower names is barely better than Dory in Finding Nemo. The nice thing about that, I guess, is that every year it is like discovering the species for the first time (even if it is the tenth). I thought I'd never seen the White Hyacinth before (below), but I'll bet my old albums of the Red Hills are full of pictures of them. 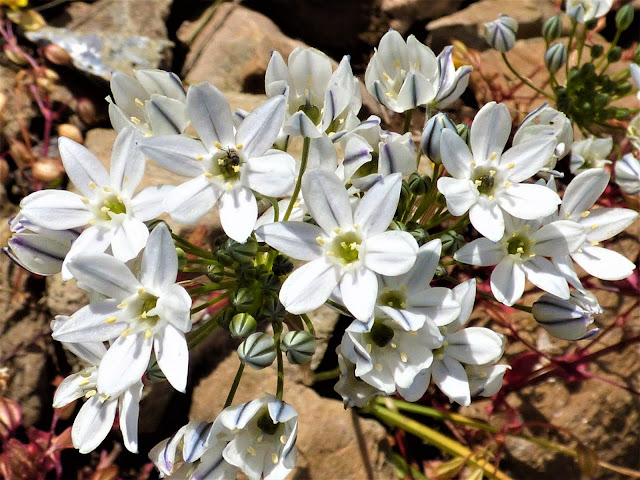 It isn't just the flowers that can be rare and unique. This arid landscape also hosts an endangered vertebrate species as well, and it's a surprise. It's a fish. That's extraordinary, knowing how hot and dry this place becomes in the summer. Somehow, the Red Hills Roach (Lavinia symmetricus) survives in a few small spring-fed pools in some of the creeks in the preserve. There were some serious concerns about whether they could survive the extended drought, but they did okay. I got some clumsy pictures on our earlier trip (below).

There isn't much time left before the flowers begin to fade away for another hot summer. All is not lost of course, as the wildflower season will probably last all summer and into the fall, since it is going to take about that long to melt all the snow that has fallen this year. If you want to see flowers in the coming months, just head higher into the mountains! But stop by the Red Hills for a few moments to see rocks that began their journey many tens of miles, maybe hundreds of miles down in the crust and mantle of Planet Earth. They are fascinating. 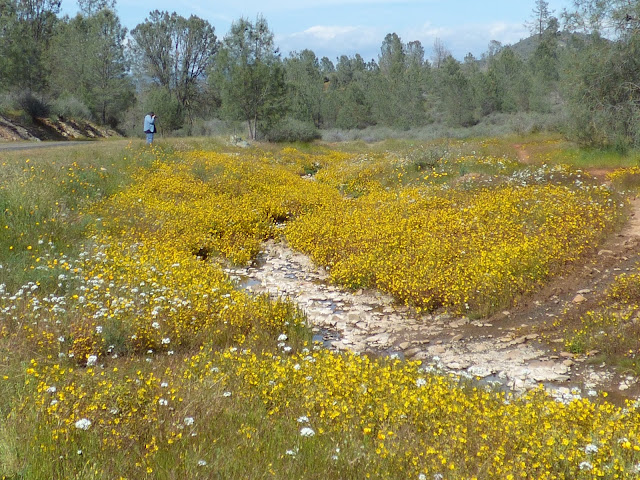