The California That Was: A Day in the San Luis National Wildlife Refuge 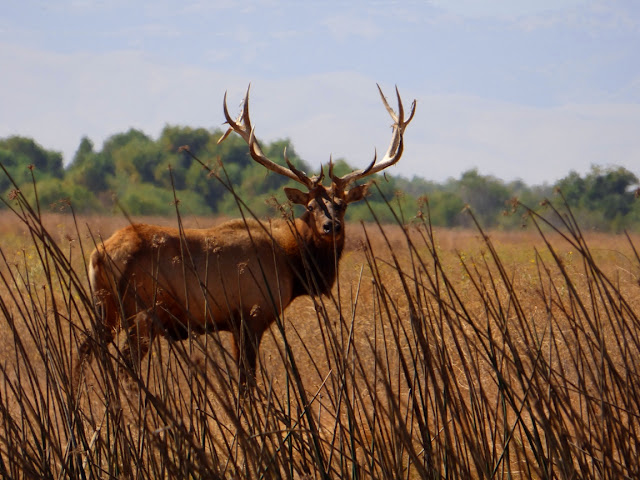 I've spent a good part of the last few months blogging about the "Hawai'i That Was", in which I have been exploring the bits and pieces of the original islands that existed before European/American incursion. I will even finish the series before long, but in the meantime I've been keeping up with the new semester (already a third of the way over), and the fall field trips. I had a break last Saturday and Mrs. Geotripper and I headed south to see if any of the migratory birds had arrived at our local refuges.
The first refuge, the Bear Creek unit of the San Luis National Wildlife Refuge was sort of a bust, as no water had been allocated to the pools there, but the Tule Elk autotour a little farther south afforded some neat photo opportunities. A huge Tule Elk buck rose out of the grassland, and I was suddenly reminded that there is a "California That Was" as well. I live in a huge prairie, the Great Valley of California, and even though most of it (95%) has been consumed by agricultural and urban development, there are still some pieces left here and there where one can be reminded of what a treasure this valley truly is (or was).
The prairie grasslands extended for four hundred miles from present day Bakersfield to Redding, and the valley averages forty or fifty miles across. Although it receives rainfall equivalent to a desert in the southern portion, rivers draining the Sierra Nevada provided plentiful water, so much so that a large part of the south valley was covered by shallow lakes (Buena Vista and Tulare). Those lakes disappeared during the last two centuries as streams were diverted for agricultural development. 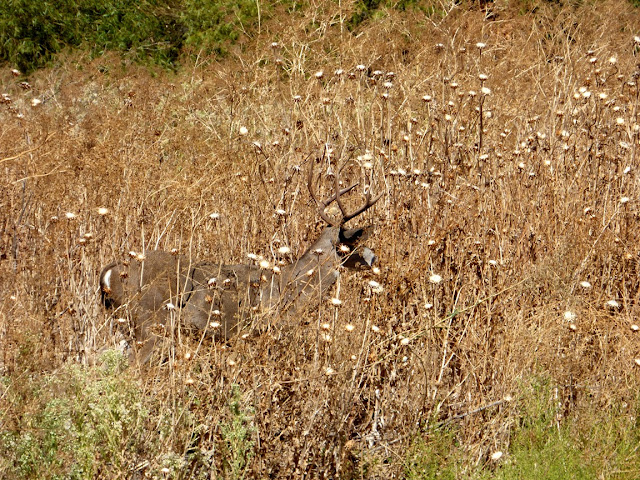 The valley supported a rich ecosystem that included numerous grazing species such as the Tule Elk, deer, and pronghorn antelope, and predators that included wolves, coyotes, mountain lions, and Grizzly Bears. Many of them are gone, but we were privileged to see the Tule Elk herd and a well camouflaged deer that made its way to the Salt Slough for a drink.
More than anything else, the "California That Was" was bird country. Millions upon millions of migratory geese, cranes, and ducks called the valley home during the winter months when the northlands were covered with ice and snow. The lakes, rivers, and wetlands provided food and shelter for the tired migrants. Although far less land is available to them today, hundreds of thousands of birds still spend the winter here, and that's what we were looking for on Saturday. We heard that some Sandhill Cranes had already arrived and we wanted to have a look.
Hundreds of them had indeed arrived, but we were surprised by the number of egrets present in the refuge. It's strange how such birds can be clumsy looking and graceful at the same time.
The California prairie is perhaps the most altered landscape on planet Earth. It's nice to know that there are dedicated groups of people working to maintain some small corners of the valley for the birds and other wildlife. It's a real privilege to have a chance to see what was once here.