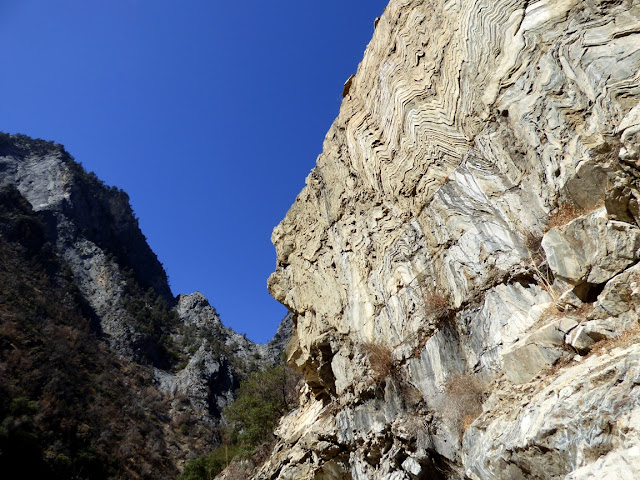 It's just a short stop on a three day exploration of the geology of Sequoia and Kings Canyon National Parks in the California's Sierra Nevada that we just completed. But what a sight! The Sierra Nevada is known for its vast granitic rock exposures (more than three-quarters of the range), but fascinating stories are told by the other rocks too. There is a spectacular gorge along the Kings River where rocks of the Boyden Cave Roof Pendant are exposed. There are vast cliffs of marble and quartzite, and other slopes expose former mudstones and claystones of a long-vanished sea. The rocks have been buried, baked and twisted into a series of tight "chevron" folds.

The exposure is well-known to geologists who explore the region, but even though I've visited the site numerous times, I was struck by not just the folds themselves, but their setting deep in the gorge. Cliffs soar thousands of feet above, and I'm not sure why I haven't included them in the photographs I've taken in the past. It leaves me wondering how this canyon could have been left out of Kings Canyon National Park, whose boundary lies just a few miles upstream. Just downstream, Kings Canyon reaches its greatest depth below Spanish Peak, some 8,012 feet. This is just 19 feet or so short of being the deepest canyon in North America by most reports (some claim Kings Canyon is the deepest).
These rocks are part of the Kings Terrane, a section of the earth's crust that was swept into the subduction zone that once existed offshore of Central California in the earliest days of the dinosaurs (Triassic-Jurassic time). They are a great spot to demonstrate the power of tectonic activity in the shaping of the Earth. If you want to find them yourself, drive a half mile or so upstream of Boyden Cave on Highway 180 towards Cedar Grove in Kings Canyon National Park.
Posted by Garry Hayes at 1:02 AM