Northern Convergence: Vancouver Island, the Plan That Was, Part II 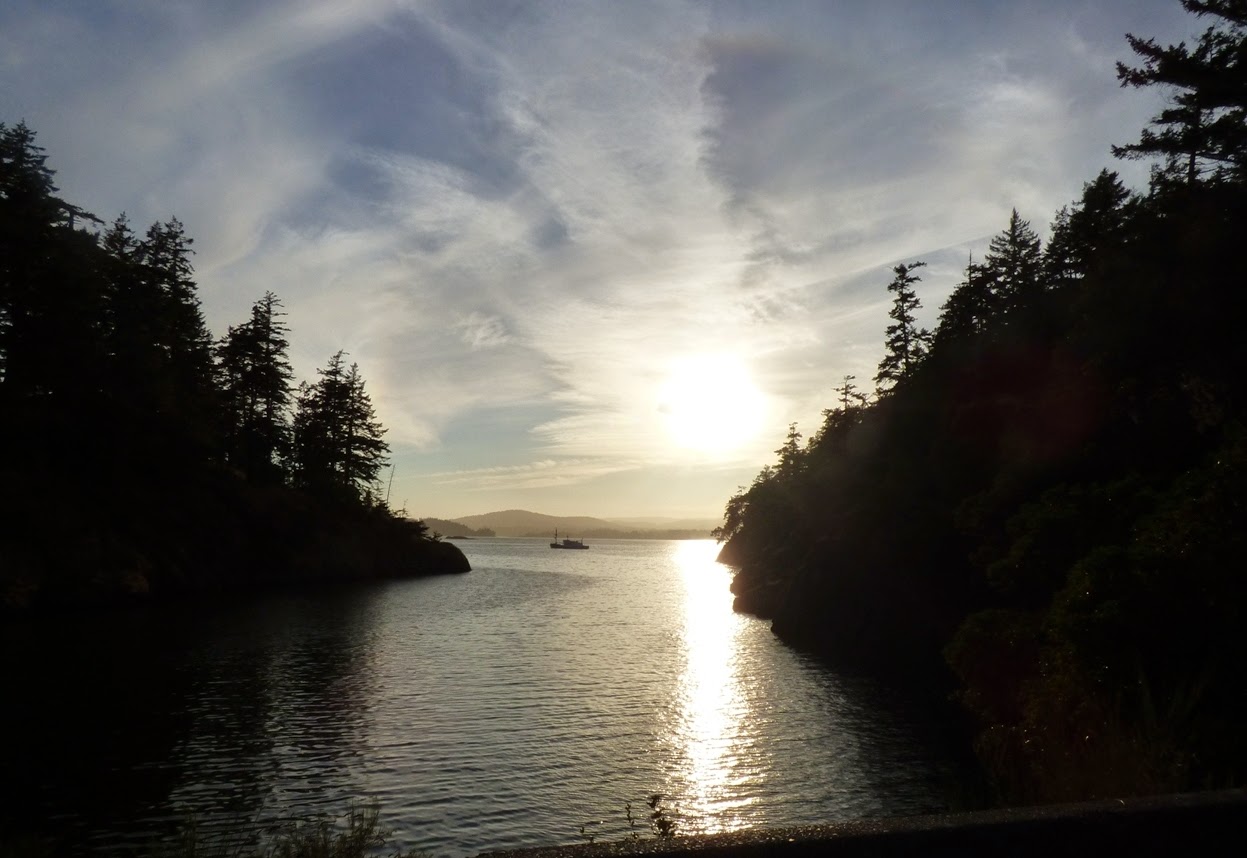 Ah, the lost opportunities! I don't want to make it sound like we had a bad Northern Convergence trip; we actually had a great time taking our students through an exploration of the geology of Vancouver Island,  but the trip we made was different than the one we planned. In the last post we talked about the Sooke Potholes, and in today's post we are talking about the opportunity to understand why the basalt exists. 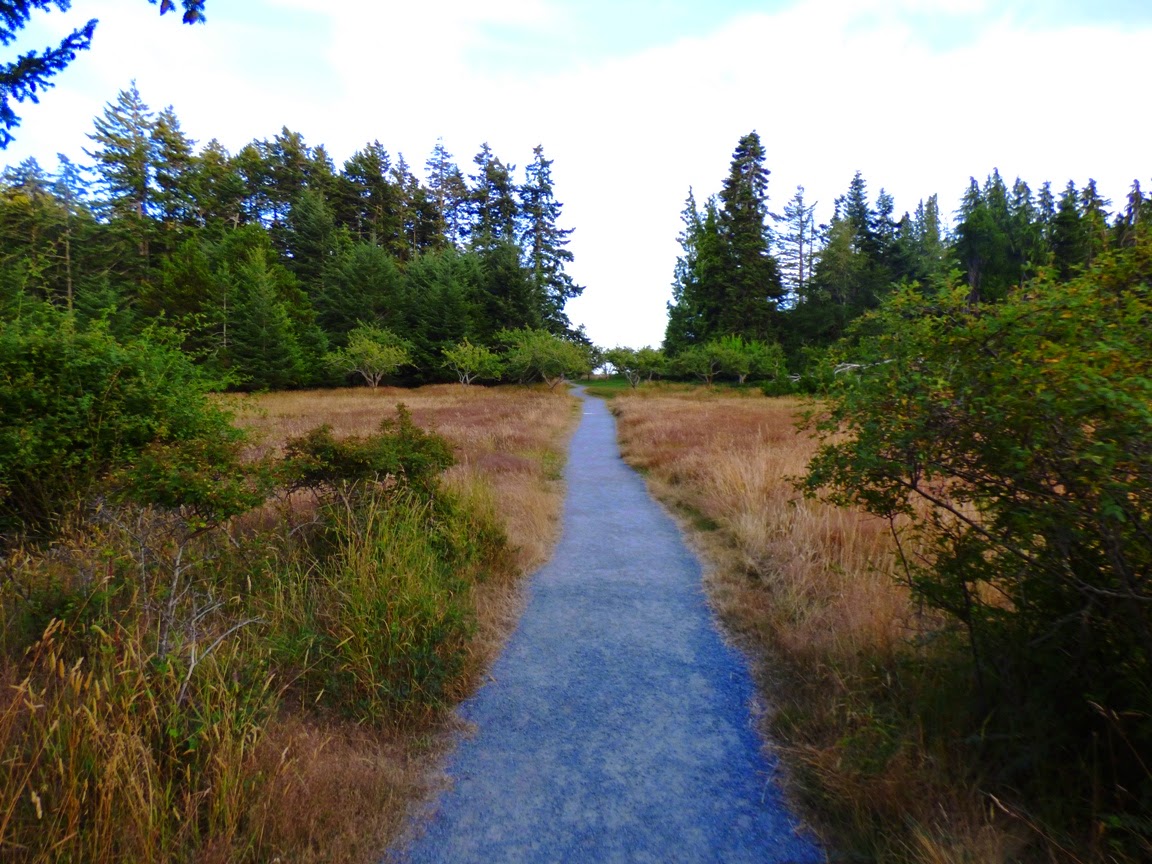 East Sooke Regional Park is a large wilderness park just 20 kilometers or so outside of Victoria at the south end of Vancouver Island. It has a nice network of trails that explore rocky coastlines and deep rainforests. I was really looking forward to exploring it, but time was conspiring against us. That opening picture? That's where the sun was in the western sky as we arrived in the park on our little scouting trip a few days before we were to meet the students. Sunsets take awhile at these northern latitudes, but there are still a finite number of hours of daylight, and we had used most of ours up. 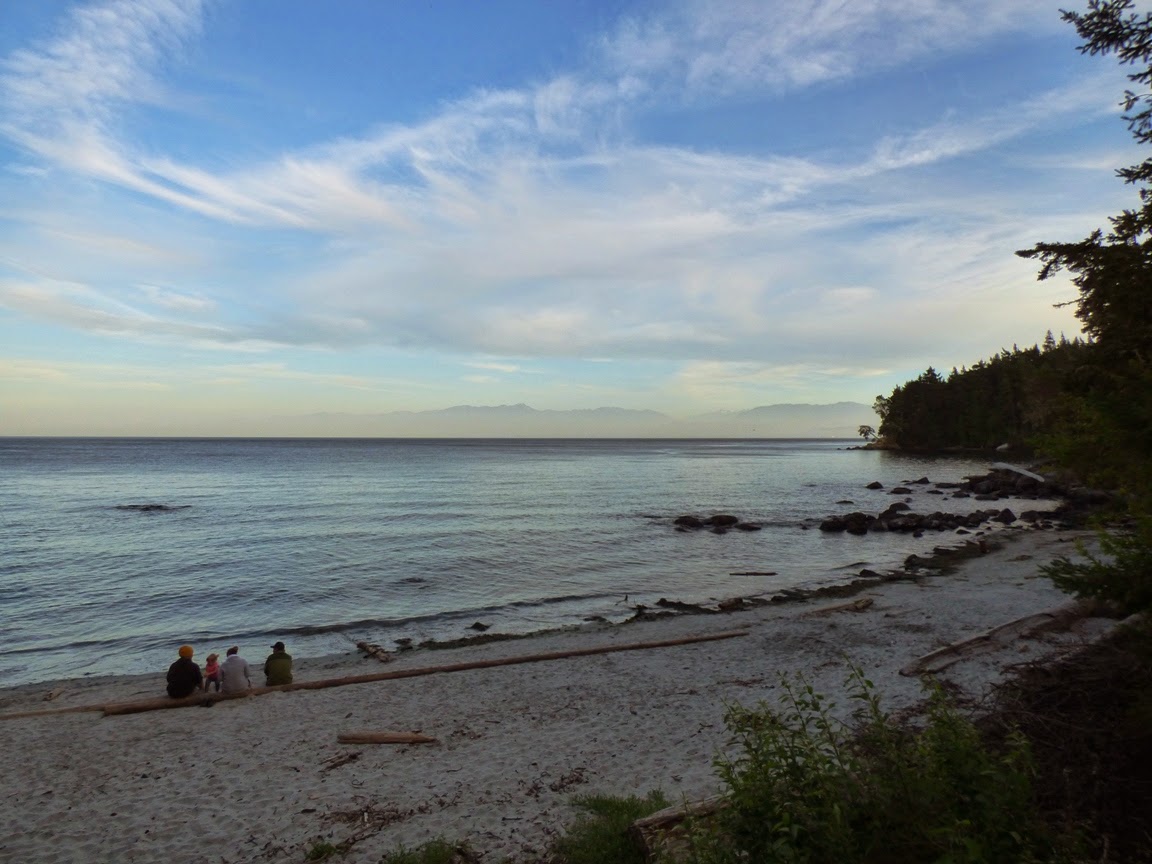 I ran down the trail to Becher Bay because East Sooke Park is said to have marvelous exposures of the oceanic crust that had been pushed into the subduction complex along the western coast of North America, and lifted up above sea level. The ocean crust includes pillow basalts, which form as lava spills out on the ocean floor, sheet dikes, which were the conduits that fed the seafloor eruptions, and gabbro plutons, the magma chambers that fed the eruptions. These rock associations are called ophiolites, and they are often of great interest to geologists, not just for the knowledge they give us about oceanic processes, but because they often are a source of valuable ores, such as copper, mercury, chrome, and platinum. 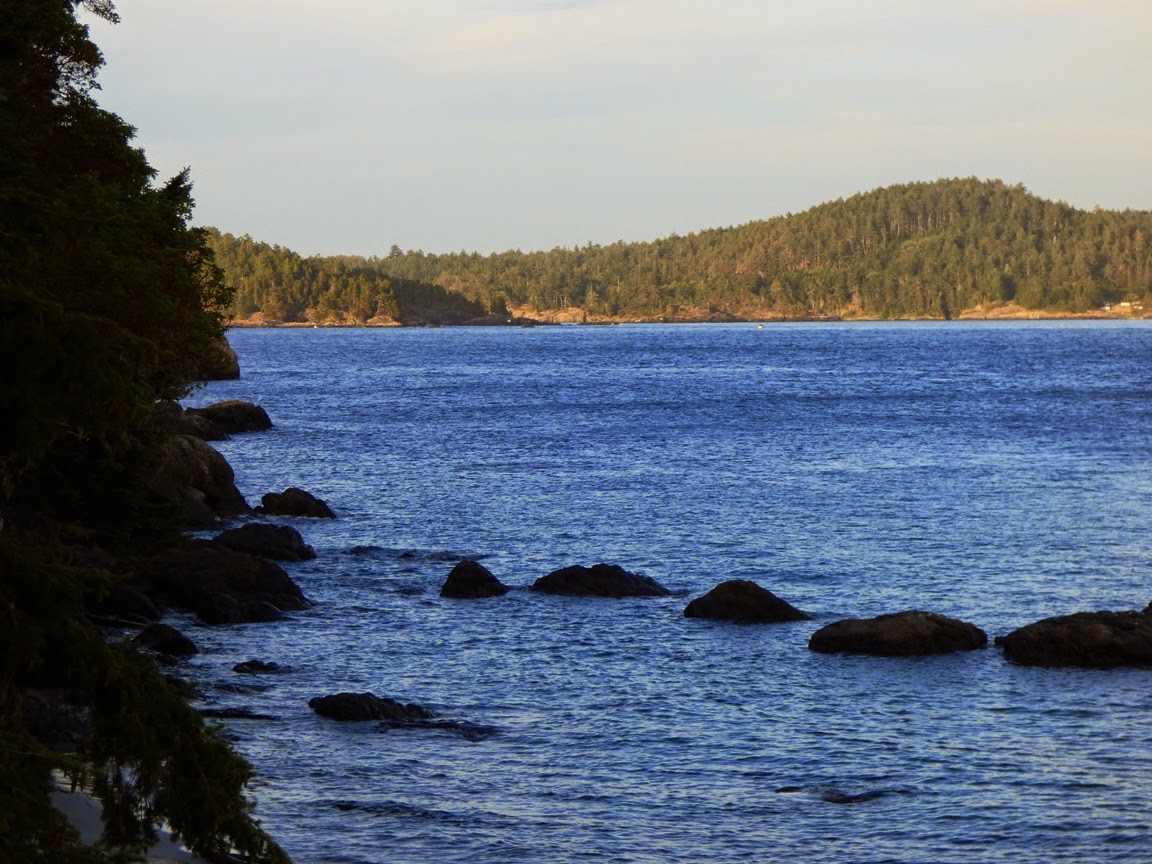 I literally only had minutes, and didn't have time to walk to the petroglyphs, which would have offered exposures of all three kinds of rock, but I consoled myself by realizing I would be back in a few days with my students and more time. Which didn't happen, as it turned out (as I said, we saw great things, but we didn't make it to East Sooke). I looked at the beautiful small bay, snapped a few pictures of the Olympic Mountains across the Strait of Juan de Fuca, and headed back to the car. As mentioned in the previous post, much of the Olympic Mountain periphery rocks were composed of the same basaltic rocks. 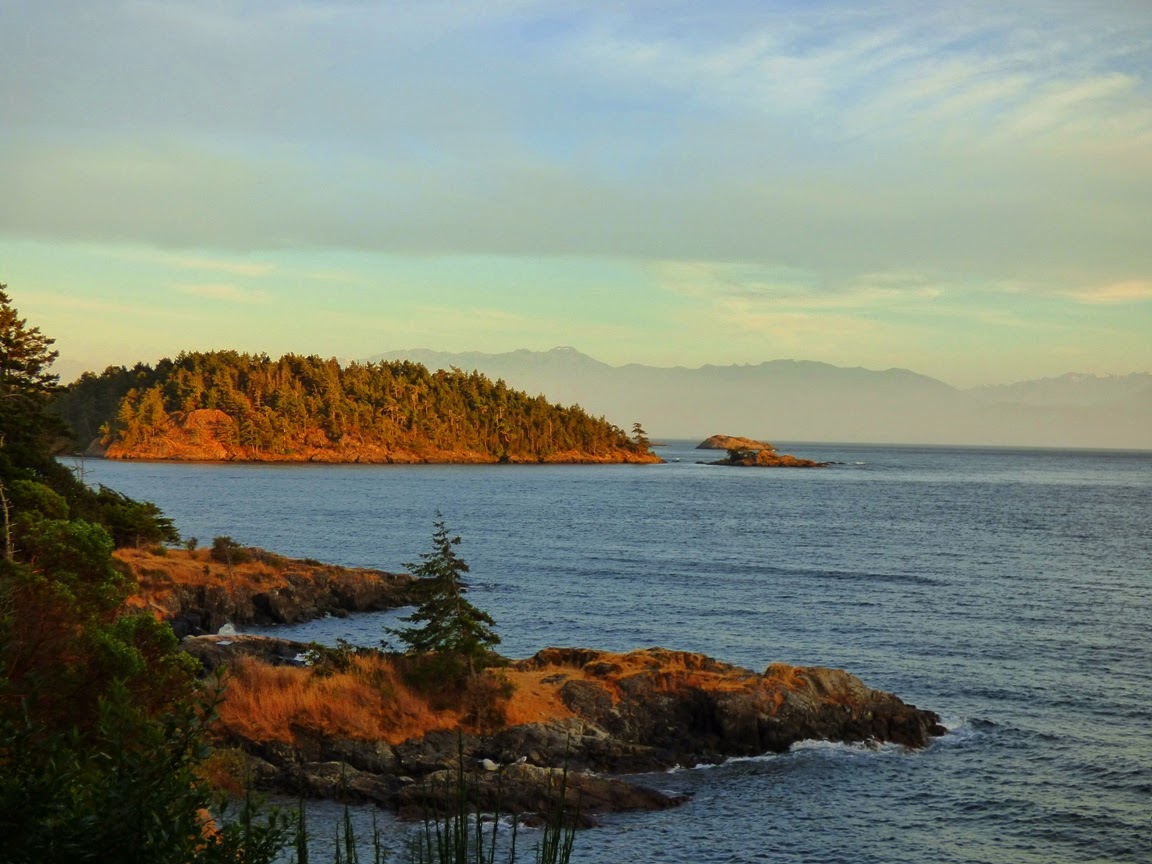 In the dying light of the evening, I was going to try to make one more stop, Witty's Lagoon, to see what are said to be the best exposures of pillow basalts in the region. And I missed the turn. As a geologist and a life-long map-o-phile, I'm embarrassed even now to say that. And by the time I realized it, it was dark.  But we enjoyed a wonderful evening, with a late dinner courtesy of Red Robin in Victoria. 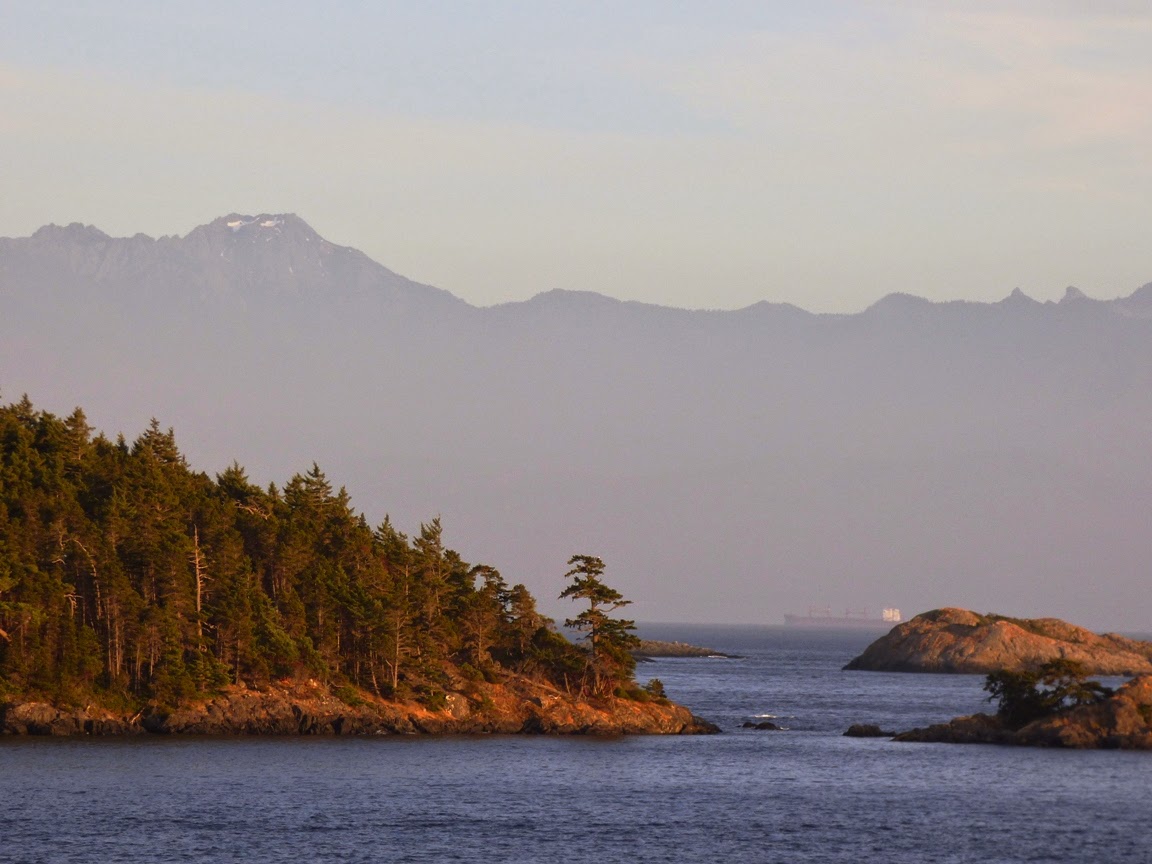 By the way, while I'm making confessions, about coming into Canada: If you want to not look like a complete doofus, learn how to pronounce the names of the places you are going to visit. At immigration, the polite officer asked why I was visiting Vancouver Island and I told him I was scouting out "Sookie" and "Na-na-emo". Eye-roll. It's "Sooke" with one syllable, and "Na-nymo" when you try to say Nanaimo. No wonder American tourists have a bad reputation....
Posted by Garry Hayes at 12:43 AM

I've lived here all my life and I still occasionally miss the turn off to Witty's Lagoon. The geology and layout of the Island makes sensible road layout difficult. Plus I like to listen to audio books while I drive.

And plenty of Canadians get the pronunciation wrong too, including people who live on Vancouver Island. Many British Columbians don't pronounce 'Vancouver' correctly, they tend to say 'Vangcouver'. I don't know why.

In fact, the harbour is said to have been named when an early exploration ship (I'm ashamed to say I can't recall which) came to the mouth of the harbour, the natives pointed to the harbour and called "sooke, sooke". The Captain decided that must be the name of the place. In reality, story says, "sooke" means rocks, and they were pointing to the harbour mouth trying to warn them of submerged rocks.

So according to the story, East Sooke Park means East Rock Park. I think that may be a suitable name.