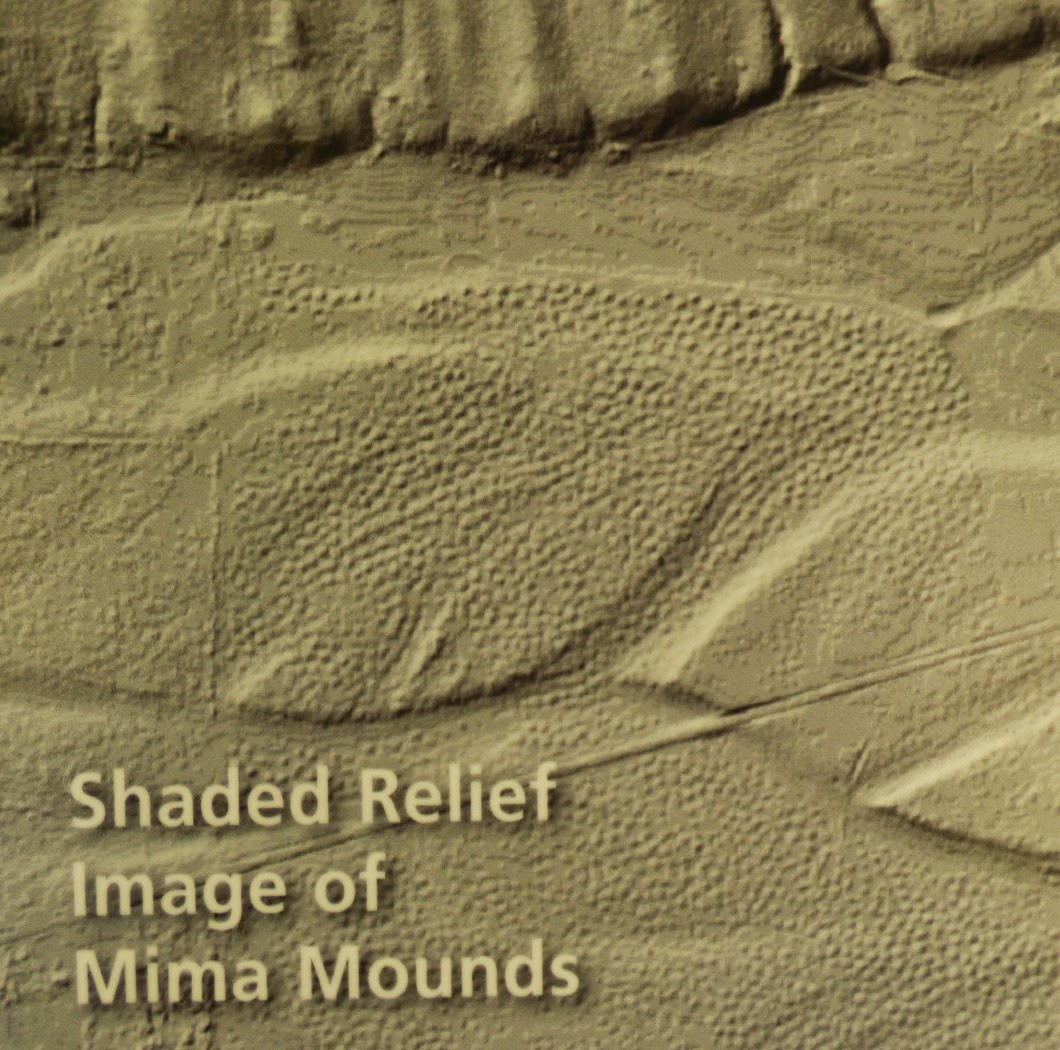 Scale is everything. This morning's mystery photo could have been on another planet, a satellite image of somewhere on Earth, a few inches across, or microscopic. Without scale, we can imagine just about anything because symmetry exists at all levels. I've seen dinosaur skin impressions that looked just like the image I posted. I've also seen Mars images that resemble these as well.

The photo yesterday is an image of several dozen acres of prairie in the Puget Sound region of Washington State. They show an unusual surface feature called Mima Mounds (as correctly guessed by several commentors). They're showing up in today's post because I finally had the opportunity to visit the original examples. I've discussed mima mounds in the past, because we have superb examples of them in our own home region of the Central Valley of California. 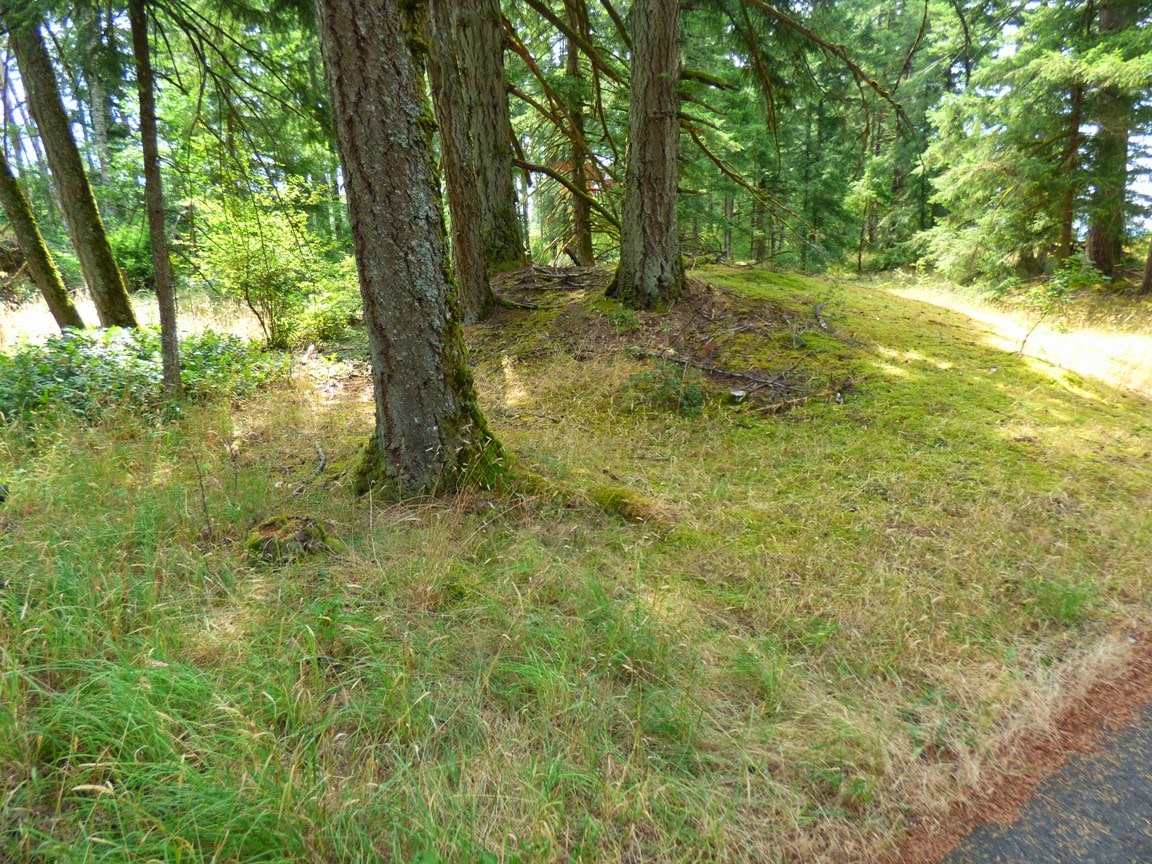 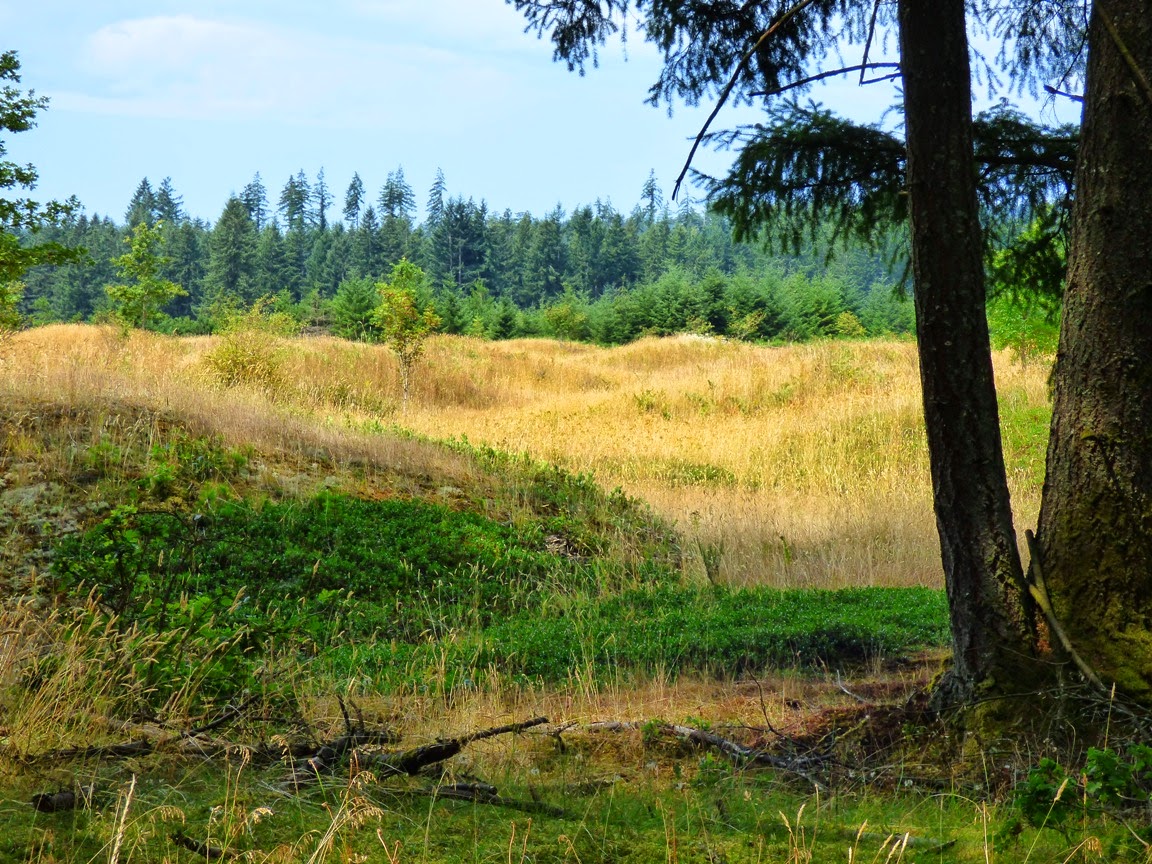 The mounds are a few feet high, several yards across, and are spaced rather evenly across the prairie surface. Their origin is still a bit of a mystery: early European explorers thought they were Native American burial mounds, some geologists feel they may be an unusual manifestation of seismic waves, and many explanations involve glacial outwash erosional or depositional processes (the prairies lie just south of the where the great continental ice sheets of the last Ice Age ended). Permafrost thawing and freezing has been suggested. Marvelous arguments have been marshaled for most of these hypotheses, but the issue is far from settled. 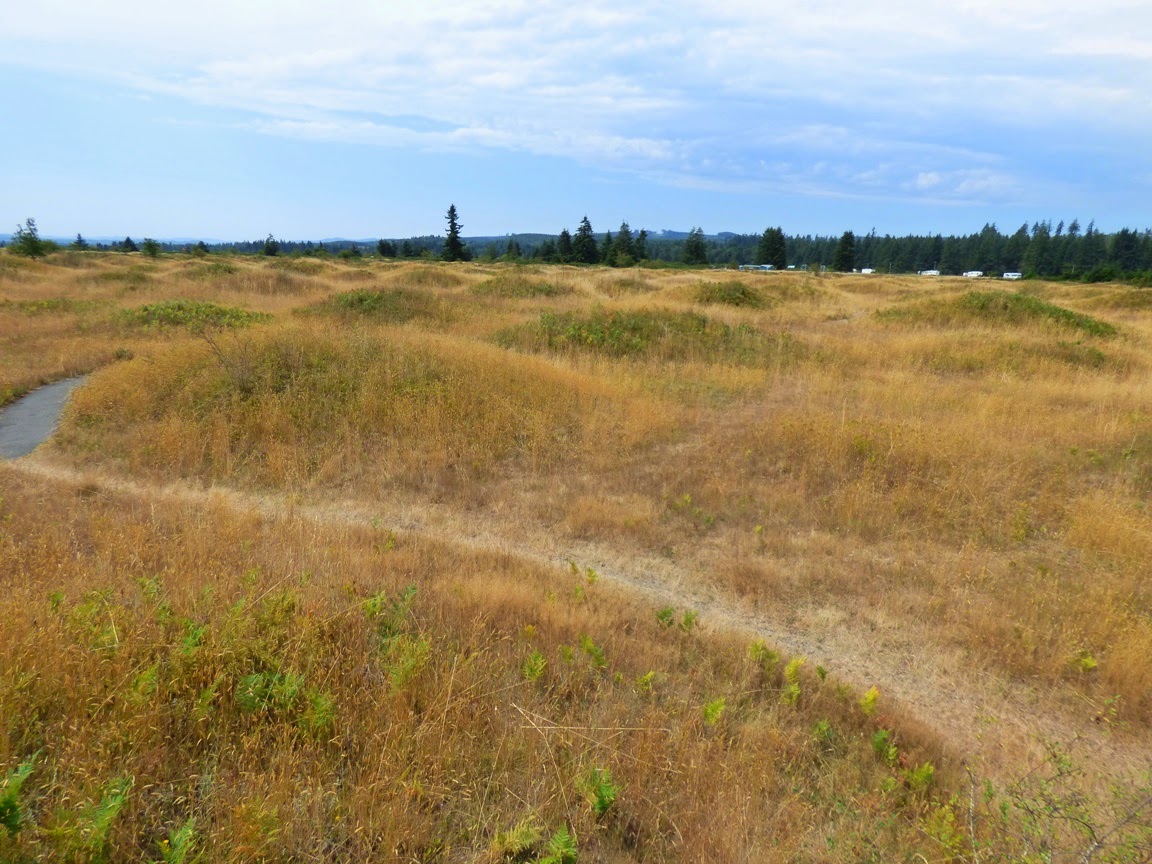 As I've mentioned in previous posts, some researchers suggested that the origin might be a bit simpler (remembering Occam's Razor: among competing hypotheses, the hypothesis with the fewest assumptions should be selected). They suggested generations and centuries of activity by ground squirrels or gophers resulted in the formation of the mounds. In the prairie environment, the mounds would give the rodents a better view of approaching predators, and their burrows would stay drier, being above the impermeable clays.

There is some current research on the origin of these enigmatic mounds by Manny Gabet at San Jose State University that supports the gophoer hypothesis. Generation after generation of gophers, building their mounds in the same place over time, could produce features like these in 500 to 700 years. Gabet doesn't insist that this is the absolute explanation for all mounds, but the computer modeling provides strong support for the idea. 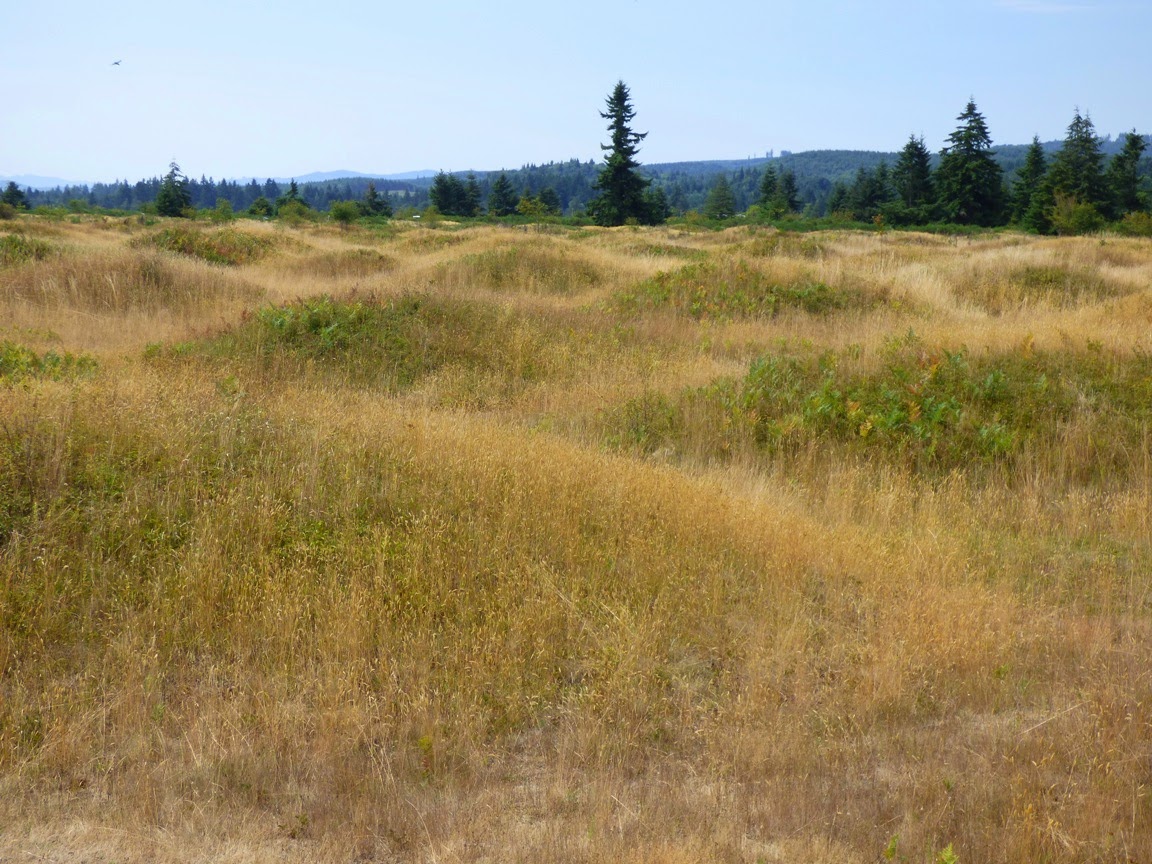 Because the mounds occur in some conditions that are similar (prairie-type environments), but with some important differences (periglacial environments versus warmer temperate dry prairies), I find the pocket gopher argument the most compelling, as they are native to each of the environments, and apparently the mounds are of a size similar to gopher territories. I have to also say that the question is still wide open, as some important confirming evidence is not present, such as the presence of active gopher colonies on the mounds today. 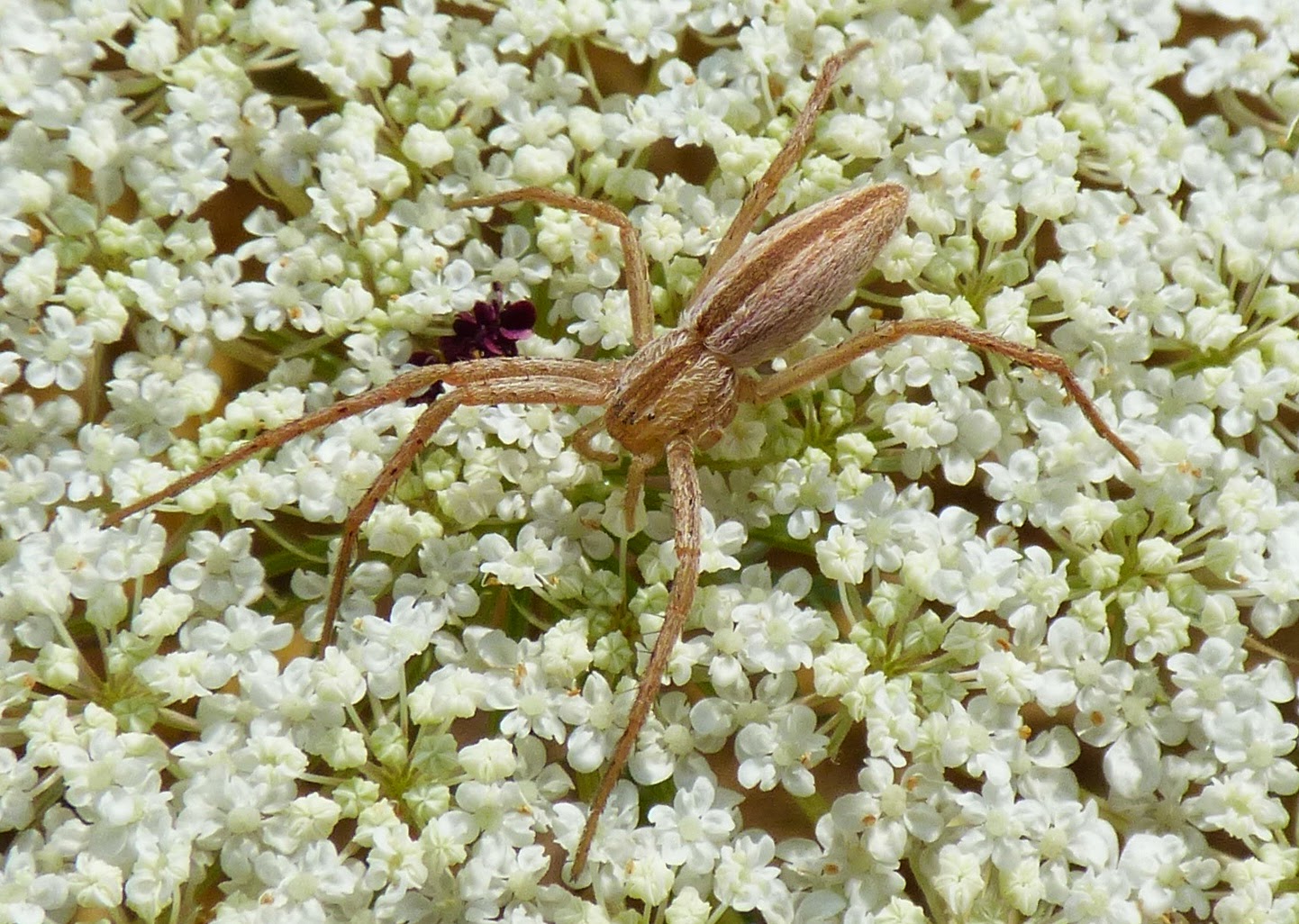 In the meantime, I enjoyed wandering through the original mima mounds. They are just west of the town of Little Rock south of Olympia, and are only a few miles off of Interstate 5. There are some nice paved trails around the mounds, and an excellent interpretive display with a second floor lookout. 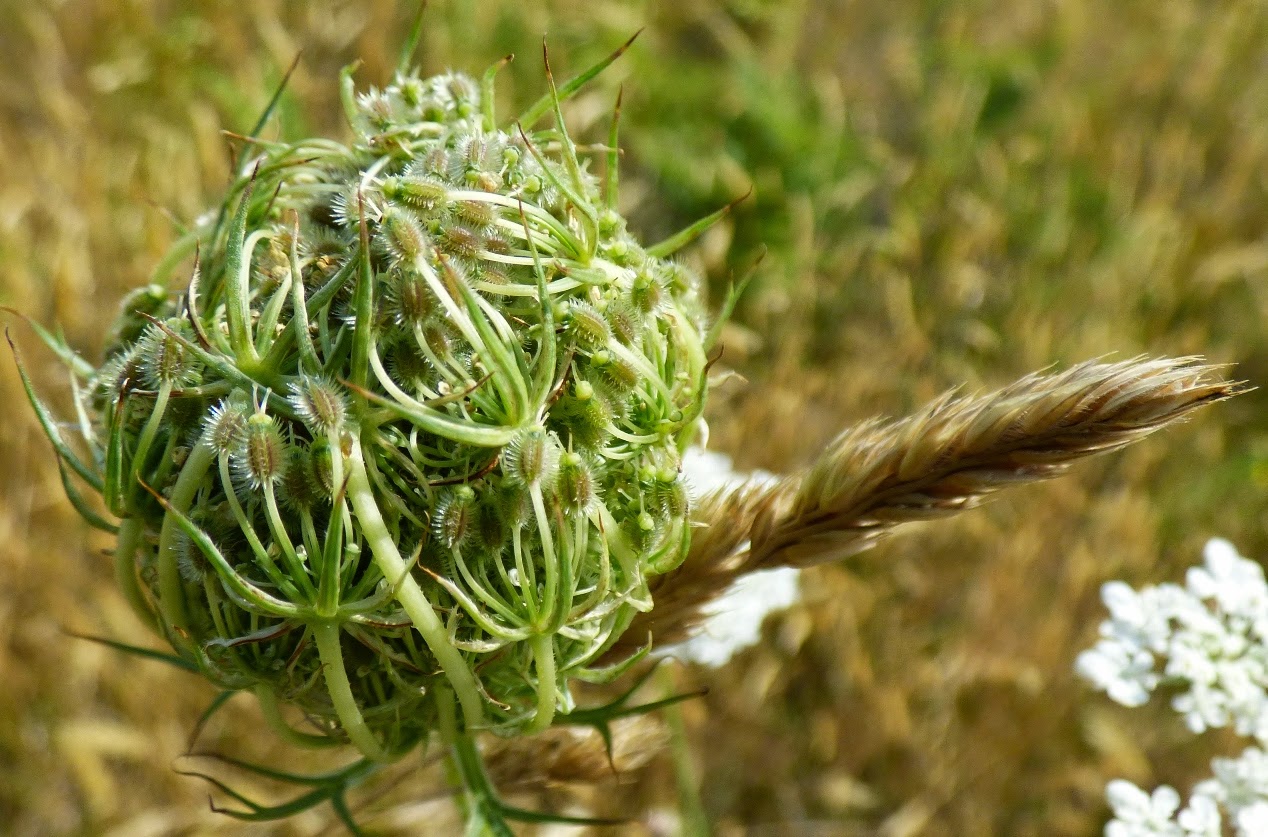 The Native Americans used fire to keep the forest from encroaching on the prairie environment, and present park policies are using a variety of management tools to maintain their historical appearance. One interesting species in the area is the Garry Oak, or Oregon White Oak (Quercus garryana), the only oak species found in the state. The oak is usually quickly overrun by fir trees, but can thrive in the prairies. 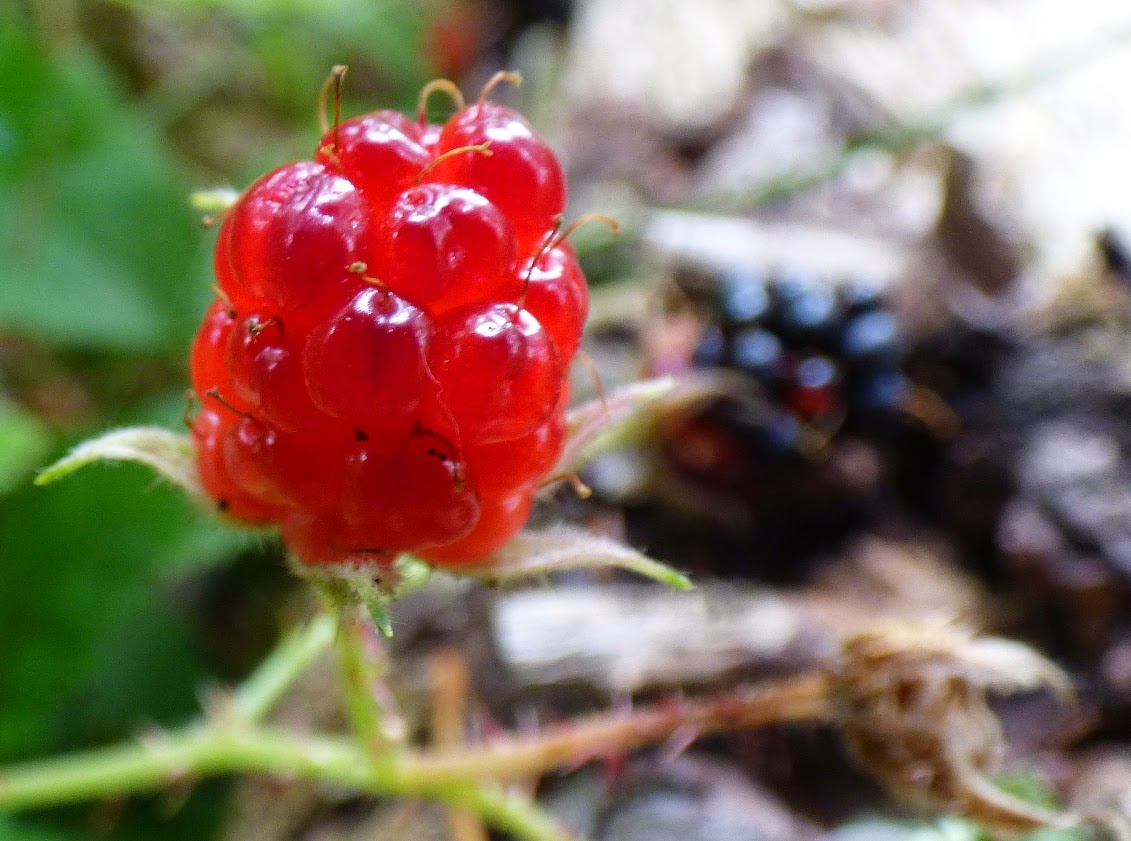 As one might expect, wildflowers are diverse and widespread during the right time of year. 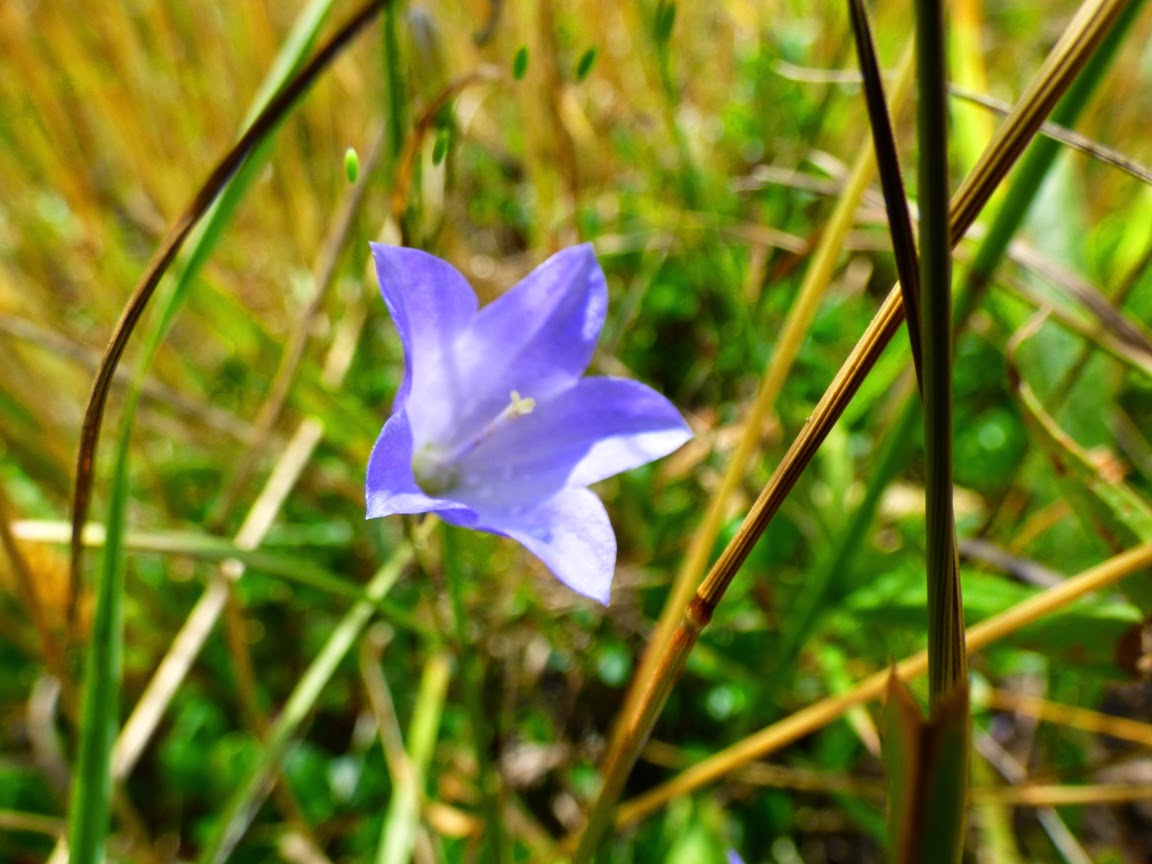 The park provided a nice respite from the long slog down Interstate 5. We're on the home stretch of three weeks on the road, but now it's just Mrs. Geotripper and myself. Our students have scattered to the winds, and we are only responsible for ourselves for the next few days. The story of our adventures in Canada will begin soon!
Posted by Garry Hayes at 10:59 PM