Having Fun With the SUPERMOON.... 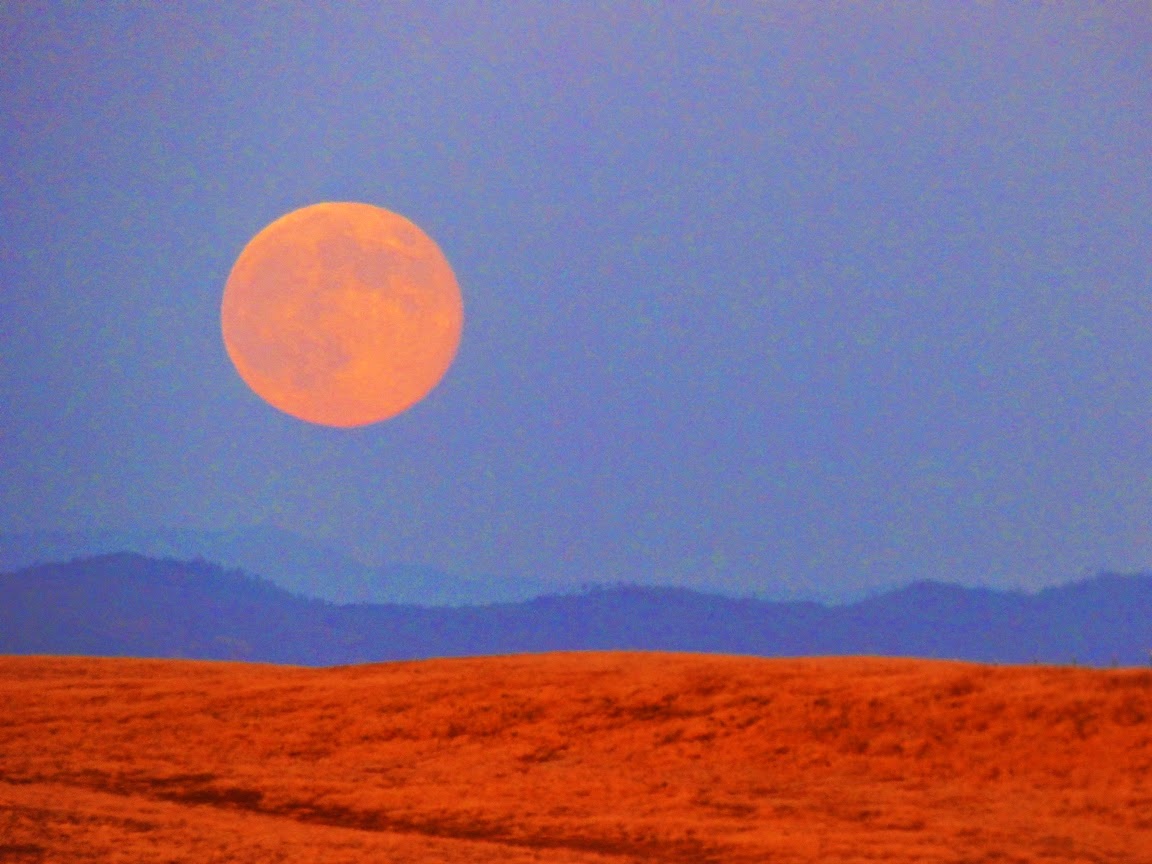 So let's face it. SUPERMOON really is overblown. Yes, the moon is closer to Earth, but it does this five times this year. Being closer, it is 14% larger in size, and 30% in brightness than when it is farther away. So, nothing unusual, really. But "they" bandy the name about and people pay more attention. Which isn't a bad thing, if it gets people outside and looking upon the cosmos. It is a good thing to pay attention to the world and the local part of the Universe that we live in once in awhile. 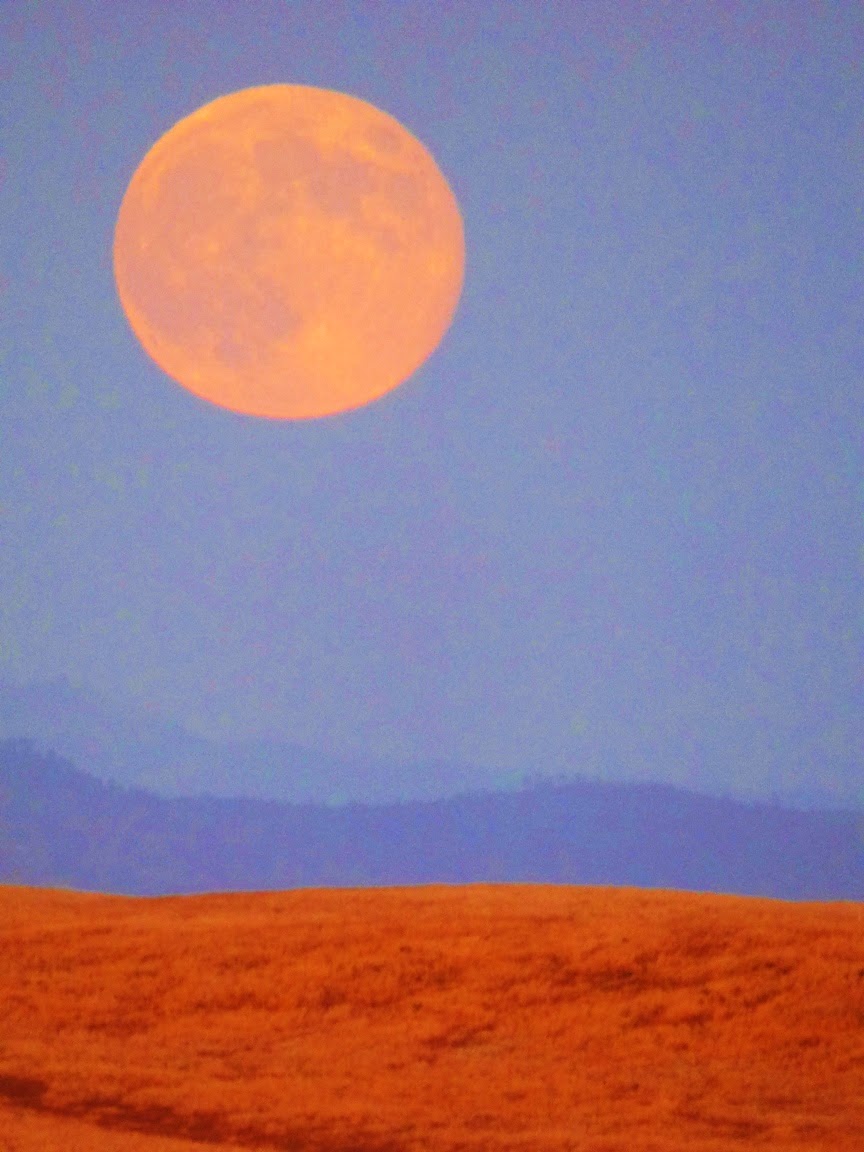 What the perigee Moon means for me is to realize that a beautiful full Moon will be rising as the sun sets, and if the conditions are right, we might get a few nice pictures. Mrs. Geotripper and I jumped into the car and hurried up to our disappearing prairie to see what we could see tonight (disappearing as in being plowed under for almond orchards). We found a nice spot to watch the sunset, which was spectacular in its own right. Conditions seemed hazy off to the east, so we were surprised by the rather vivid moonrise that was happening at the same moment. 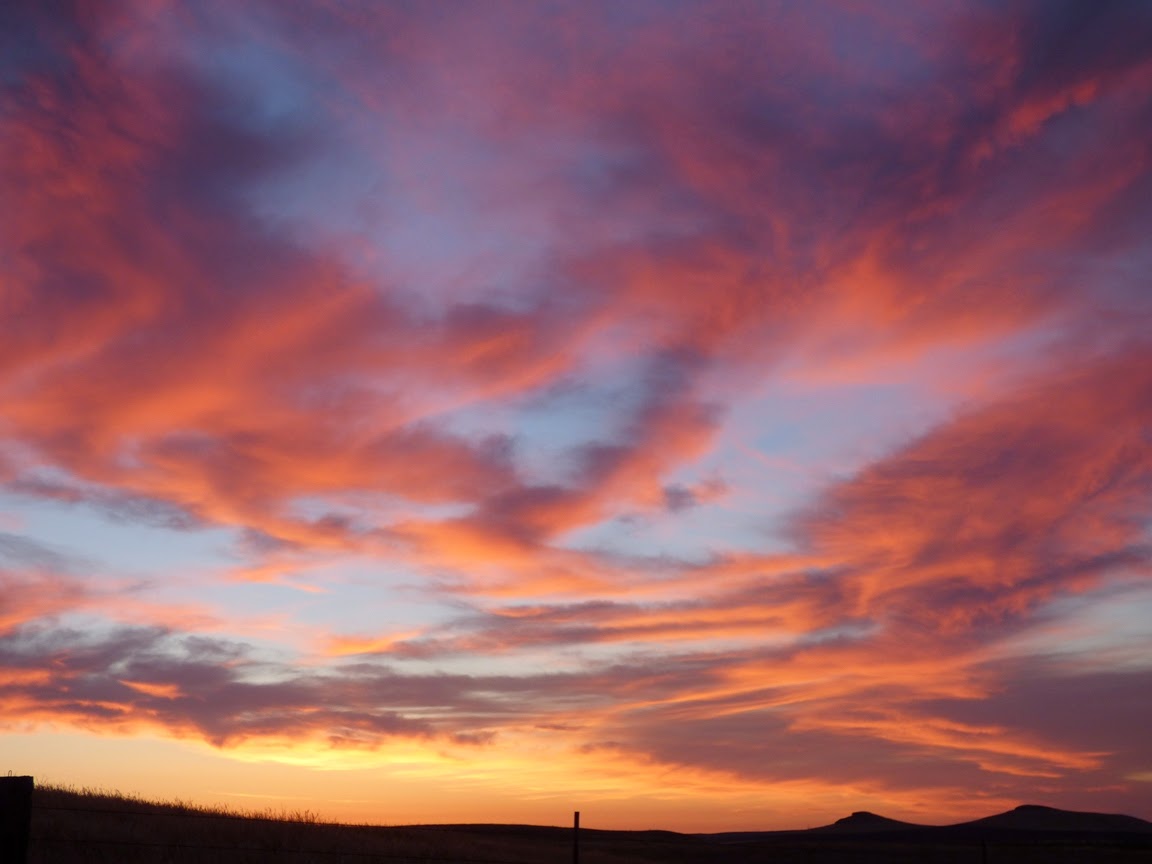 We don't get many moments like this...it was almost perfect silence except for the lilting call of a Meadowlark in the distance. There was a light wind blowing, and our delta breeze had brought the temperature down to 80 degrees after a day in the mid 90s. We could smell the dry grass. It was just a perfect little moment. 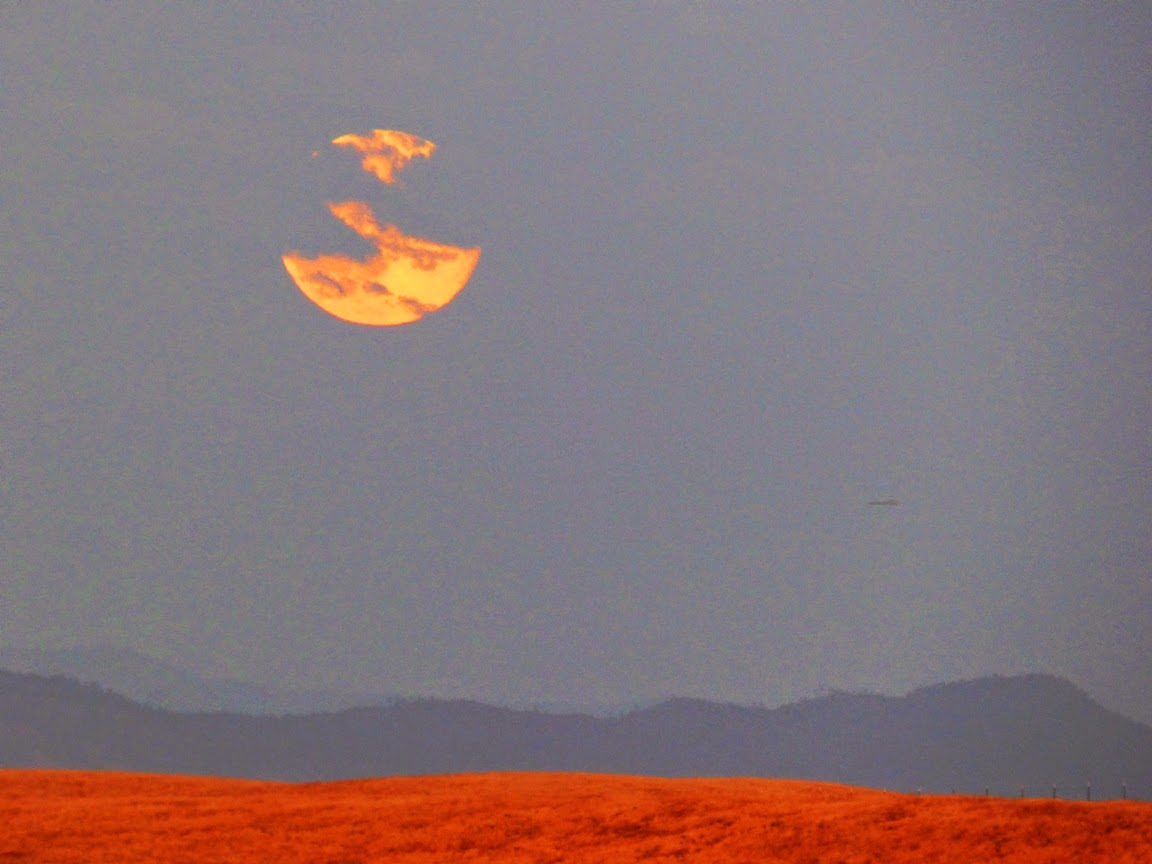 The haze did hide the clouds on the horizon, so we were a little surprised when holes appeared in the Moon. It was a neat effect. 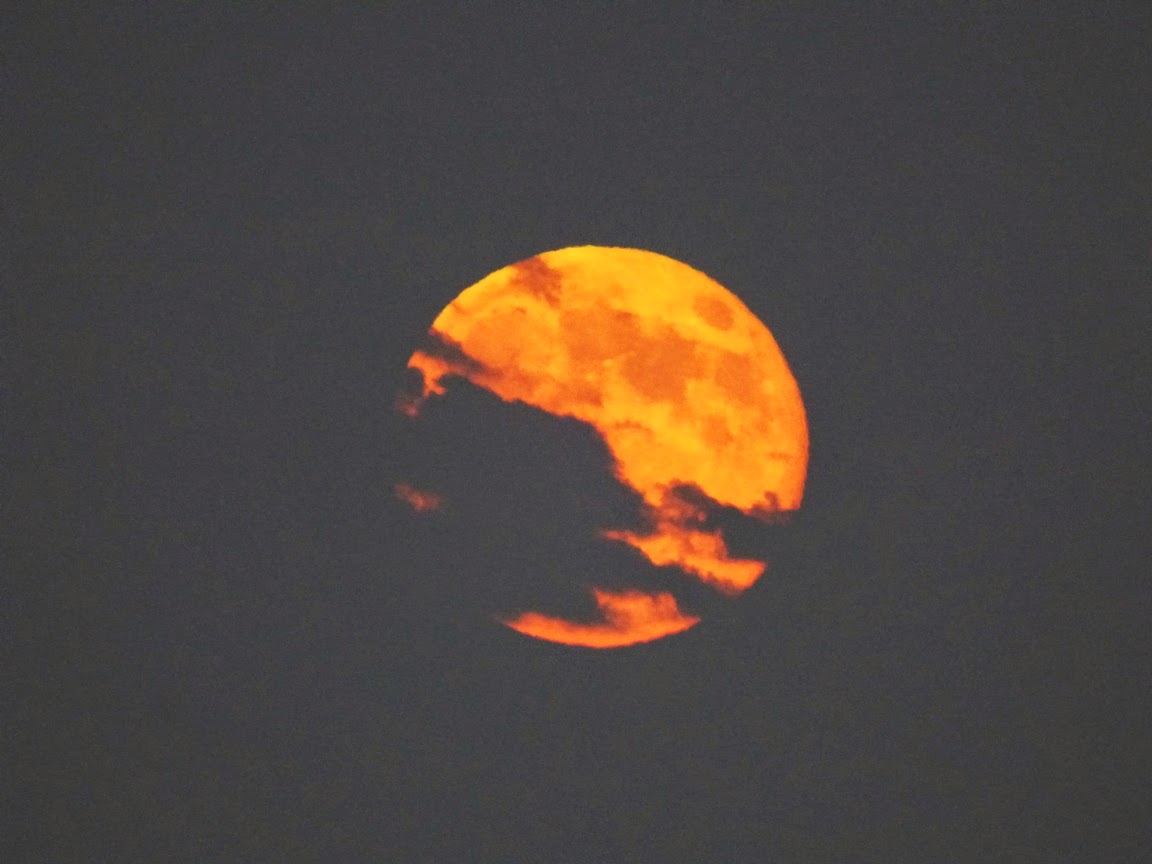 The moon climbed a bit higher, so it was time for the highest zoom. Craters are not usually well-defined at the time of the full Moon because there are few shadows, except around the edges. Still, it was a beautiful sight. 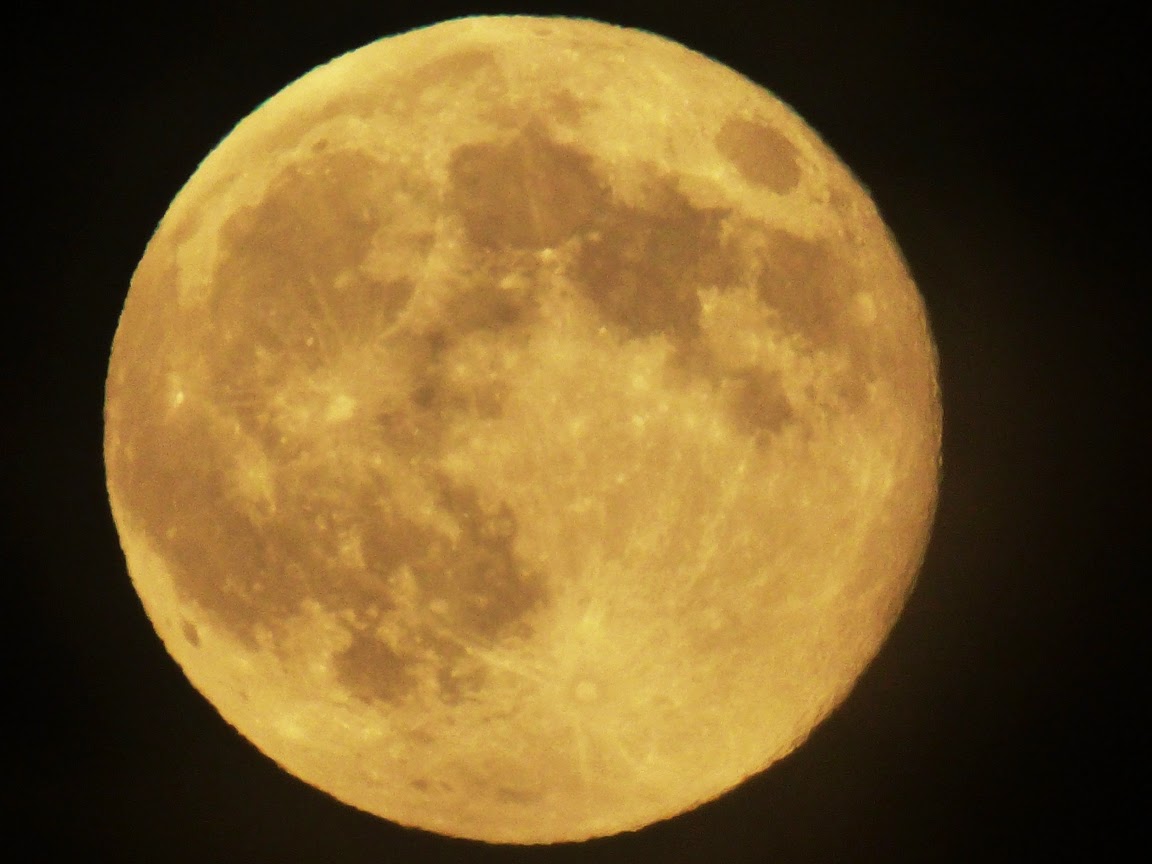 The clouds moved across the Moon, and it was getting darker. We left the prairie behind and returned to our comfortable little home by the river. Back to work! And don't forget the other doings in the cosmos today: we've paid our very first close visit to a comet in the last two days. Check out this video for a look at a very strange celestial object: https://www.youtube.com/watch?v=UZQy3-zXq-M 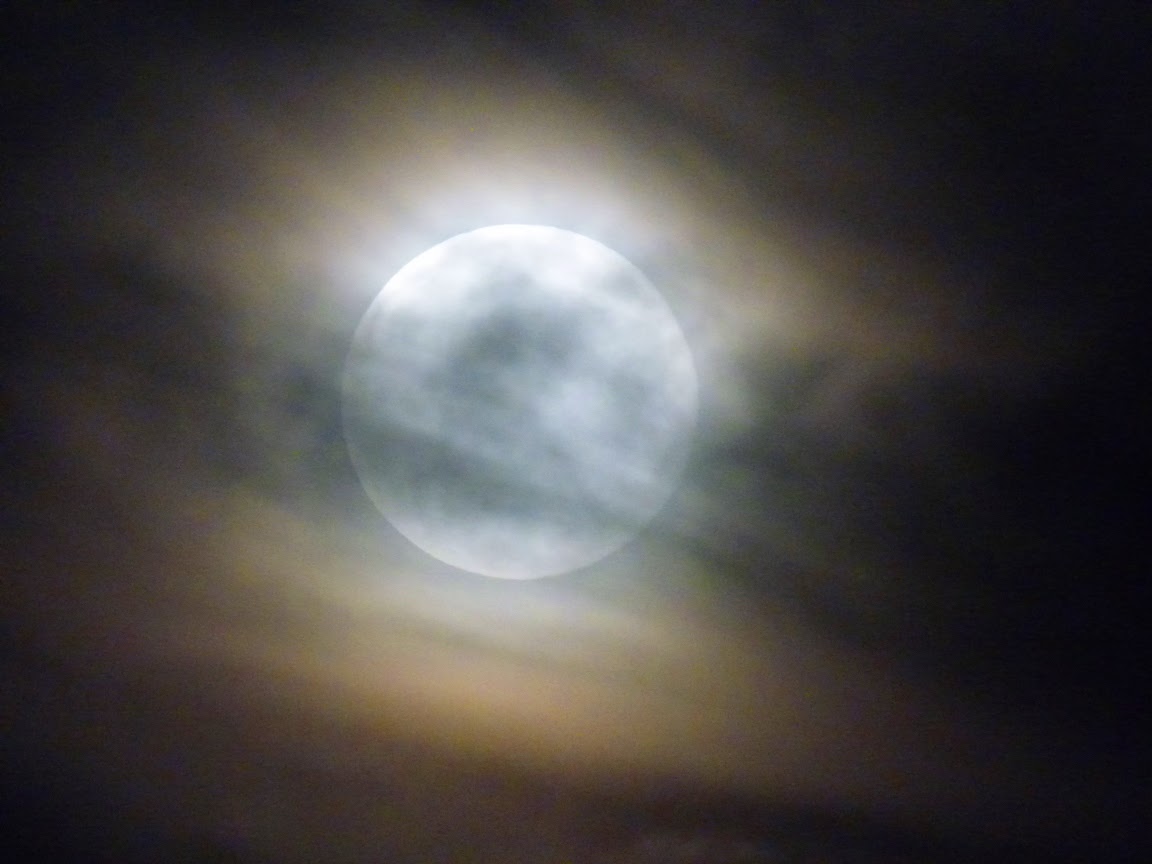