Northern Convergence: The Day We Actually Had on Vancouver Island...and Goldstream 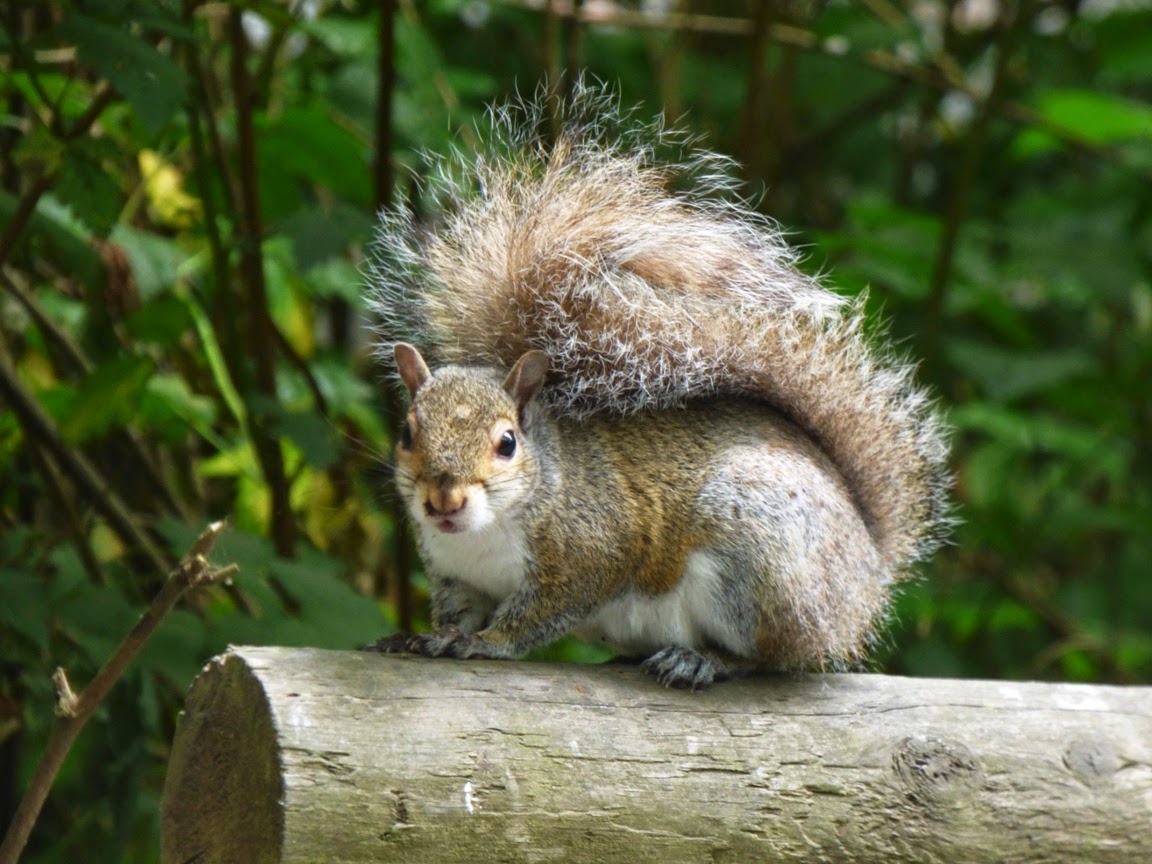 A plan is such a wonderful thing! With a plan, one can conduct field trips smoothly, with no delays, no missed stops,  no problems. Oh, did I say plan? I meant to say "luck". I've been having fun with my recent posts, talking about the places on Vancouver Island that we intended to visit on our recent field studies course, but which we had to miss. There were plenty of reasons, all of the normal kind: it's all about what happens when you try to move 22 people from point A to point B.

But we did see some neat geology, and discovered a pretty good site for studying the regional rocks.
The day started out as planned. We slept in a bit, having arrived the previous night very late on the ferry from Port Angeles. We headed out to Beacon Hill Park in the center of Victoria. The geology of the park was covered in this previous post, with the main difference being that it was seriously overcast and starting to rain. We certainly couldn't see across the Strait of Juan de Fuca. As is usual, we took longer than expected, and the situation was complicated by the fact that we couldn't find bathrooms where we expected to. And traffic was getting heavy in the downtown area. Think of the challenge of maneuvering five vehicles through heavy traffic looking for a gas station. And then finding one, which turned out to have a single bathroom. Time was ticked away, and just like that we were an hour or two behind schedule. The Sooke Potholes fell from the schedule first. East Sooke Park disappeared next. And the rain was coming down more heavily. We needed a substitute plan...
We'd passed the signs for Goldstream Provincial Park during our reconnaissance trip. In the crush of trip planning, I didn't have time to consider the site carefully, but we needed someplace to stop, use a restroom, and to discuss some of the anthropology/geology topics that had been delayed by rain at our other stops. Goldstream turned out to have a really fine rain-proof picnic shelter and the all important restrooms! We caught up with class, while I ran to the visitor center and tried to learn the geology of the park in ten minutes. 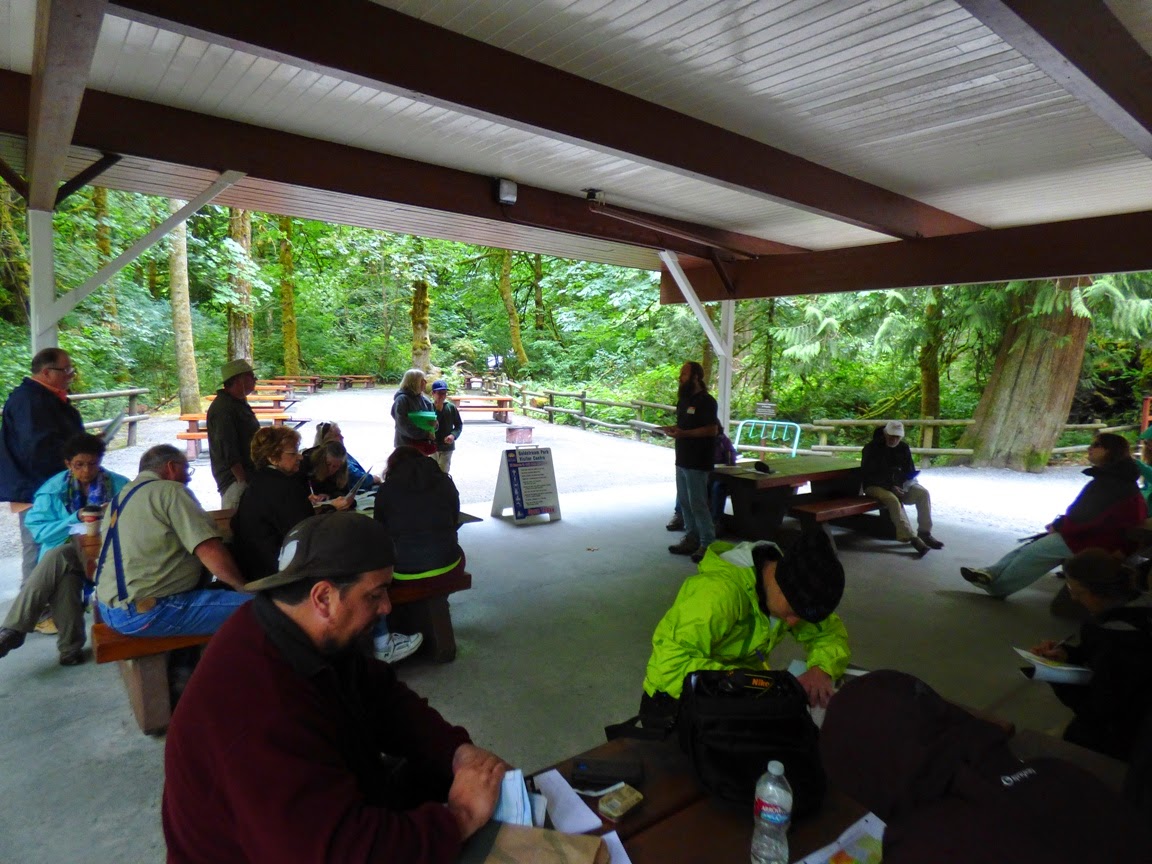 Goldstream Provincial Park turns out to have a lot of important geology in only 800 or so acres! The Leech River Fault, a major terrane boundary, cuts through the park. It hosts a surprising variety of plant and animal life, due to a wide variety of habitats. Part of the value of the park is that it has not been logged, and thus preserves old-growth forests, including 700 year old Cedar trees. 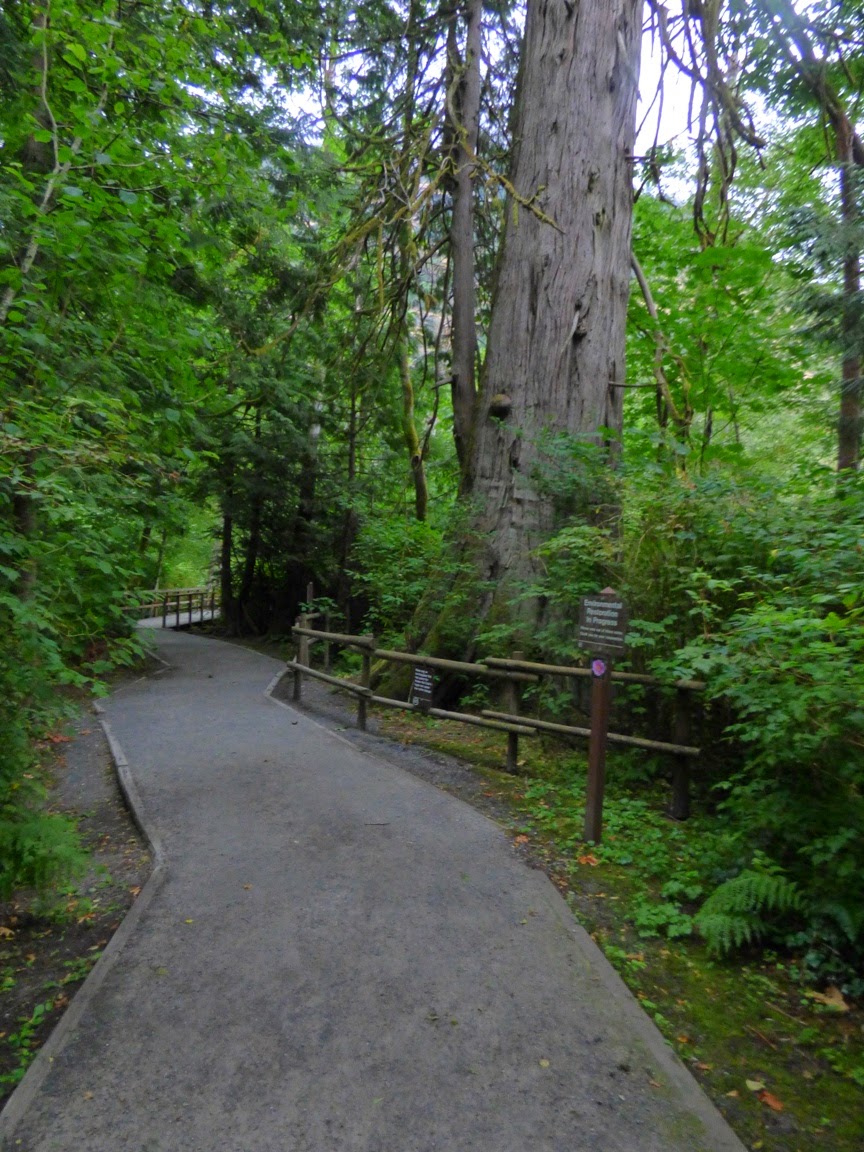 The main park trail winds past some of the finest examples of old trees. 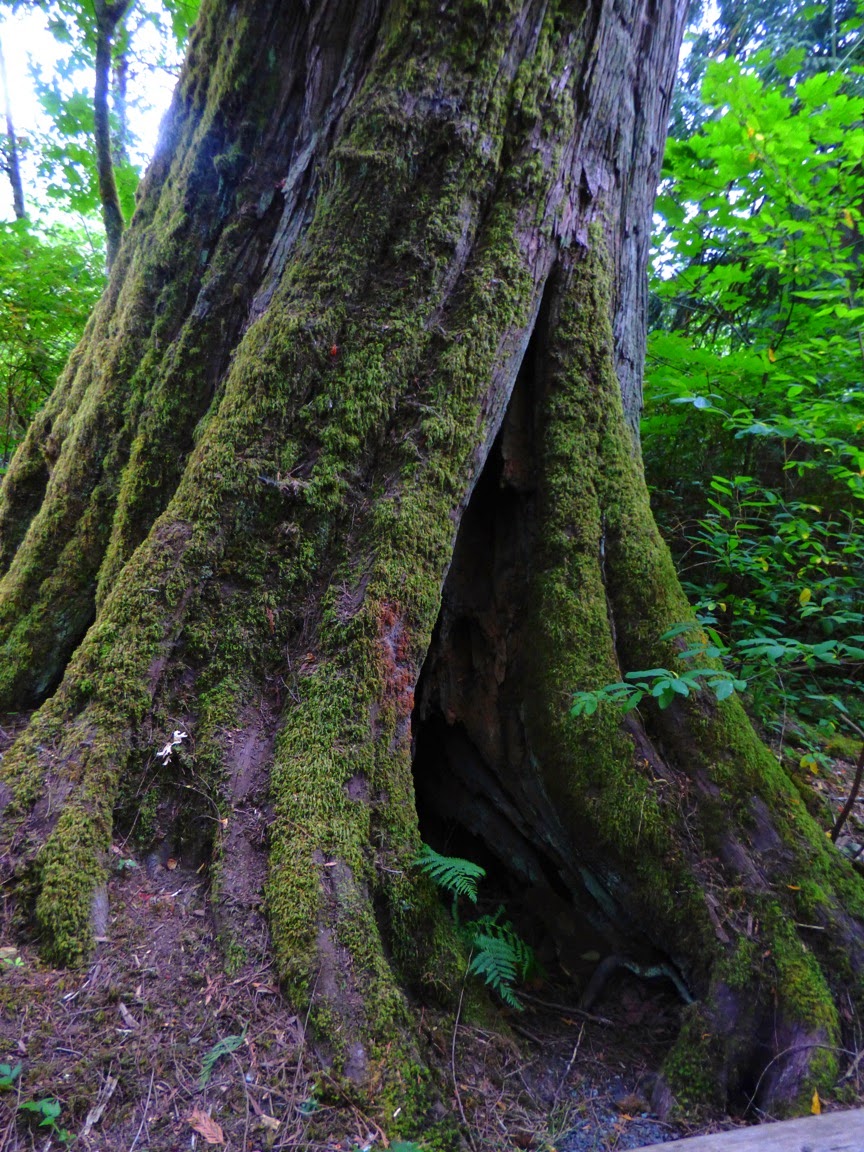 The appearance of a rainforest belies the fact that the park includes one of the northernmost examples of a dry Mediterranean climate zone on the continent, and maybe in the world. Such climates are distinguished by dry summers and mild winters. The mild climate results from the moderating effects of the Pacific Ocean and Strait of Georgia, and the dryness from the rainshadow effect of the mountains along the main part of Vancouver Island. 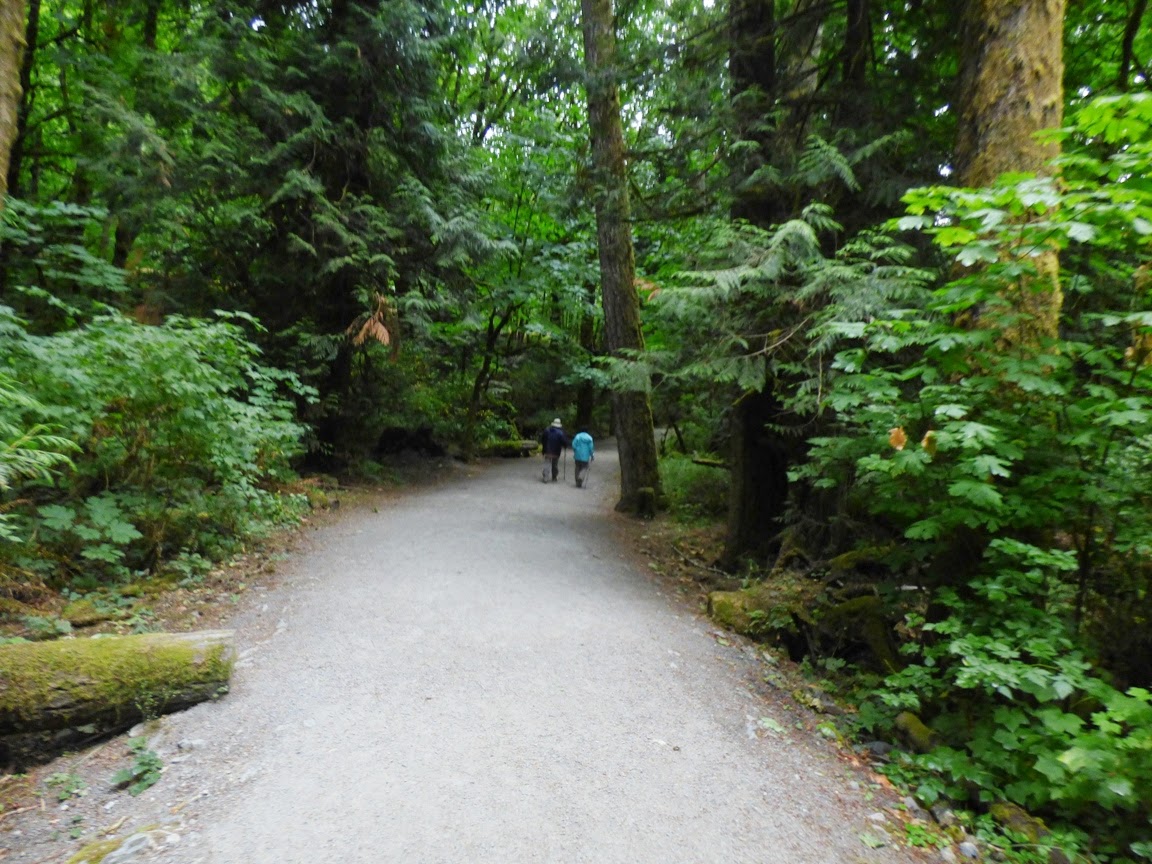 The park includes an estuary complex and river (the Finlayson Arm) that hosts ten different species of fish, including three salmon species, Steelhead trout, and Coastal Cutthroat Trout. The estuary is evidence of the glacial origin of this landscape, having been carved by the continental glaciers that covered the region as recently as 13,000 years ago. The glaciers were exploiting a weakness in the rocks from a fault that ran through the valley. 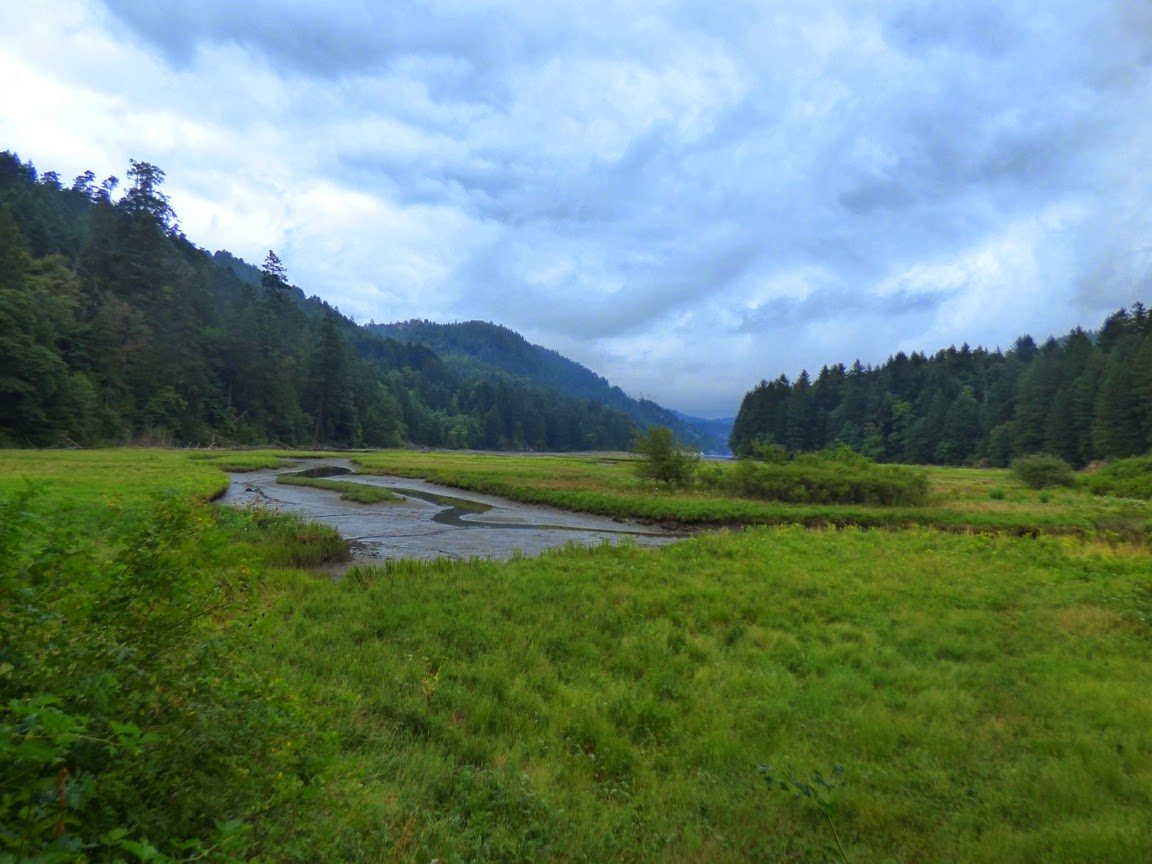 Looking south from the Nature Center one can see Mount Finlayson, another feature that indicates the presence one time of glaciers. The rounded form of the mountain identifies it as a roche moutonnée, a larger-scale version of the rounded forms seen in Beacon Hill Park in Victoria. The rocks making up the peak are metamorphic volcanic rocks and granitic plutons dating from the Mesozoic Era. 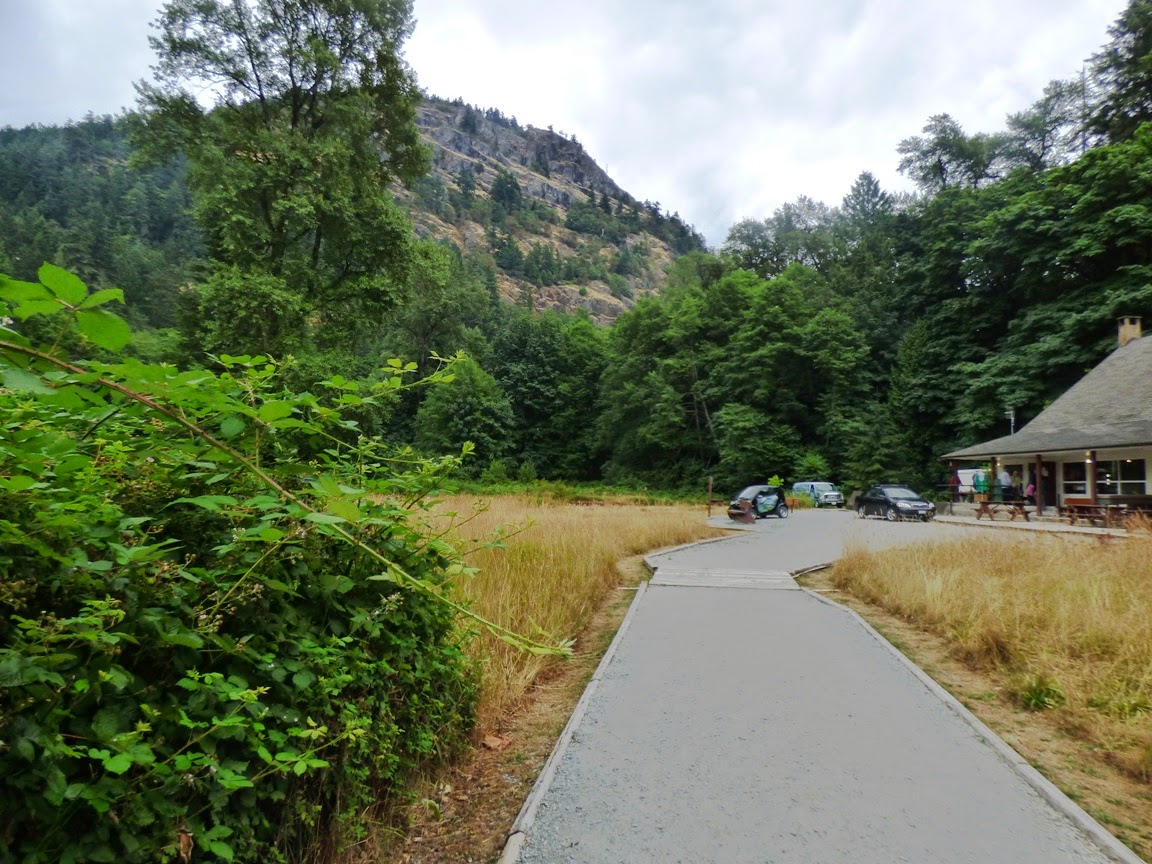 One might wonder the derivation of the name of the park. The rocks on the west side of the canyon are part of the Leech River Complex, a collection of schist and slate dating from the late Mesozoic Era. The rocks at one time or another were altered by superheated mineralized water, and quartz veins with minor amounts of gold were emplaced in the area. The gold was discovered in 1858, and a minor rush involving perhaps 300 miners ensued a few years later. There was not a great deal of gold to be had, and the boom soon petered out, but the name remained. A few old tunnels and mines can still be seen in the park. 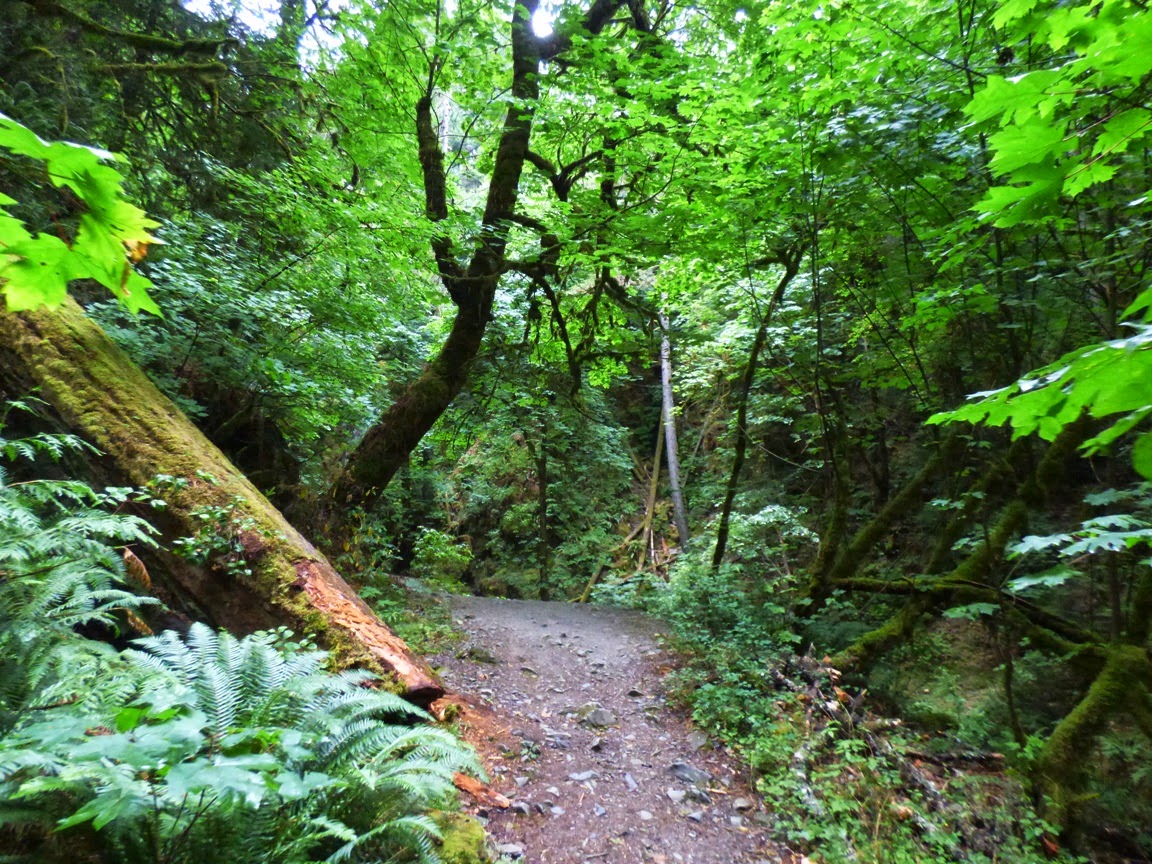 There was one more treasure for us to discover. When the ice sheet moved through the area, it preferentially eroded the north-south fault valley, and the east-west drainages were not cut so deeply. When the ice disappeared, the side drainages remained as elevated river valleys, and waterfalls were formed. A beautiful small waterfall with the somewhat pretentious name Niagara Falls can be reached by a short hike from the parking area. The name comes clearly not from the volume of the waterfall, but from the height, which at 155 feet (47.5 meters), is similar to that of its more famous cousin in New York/Canada (167 feet/51 meters). 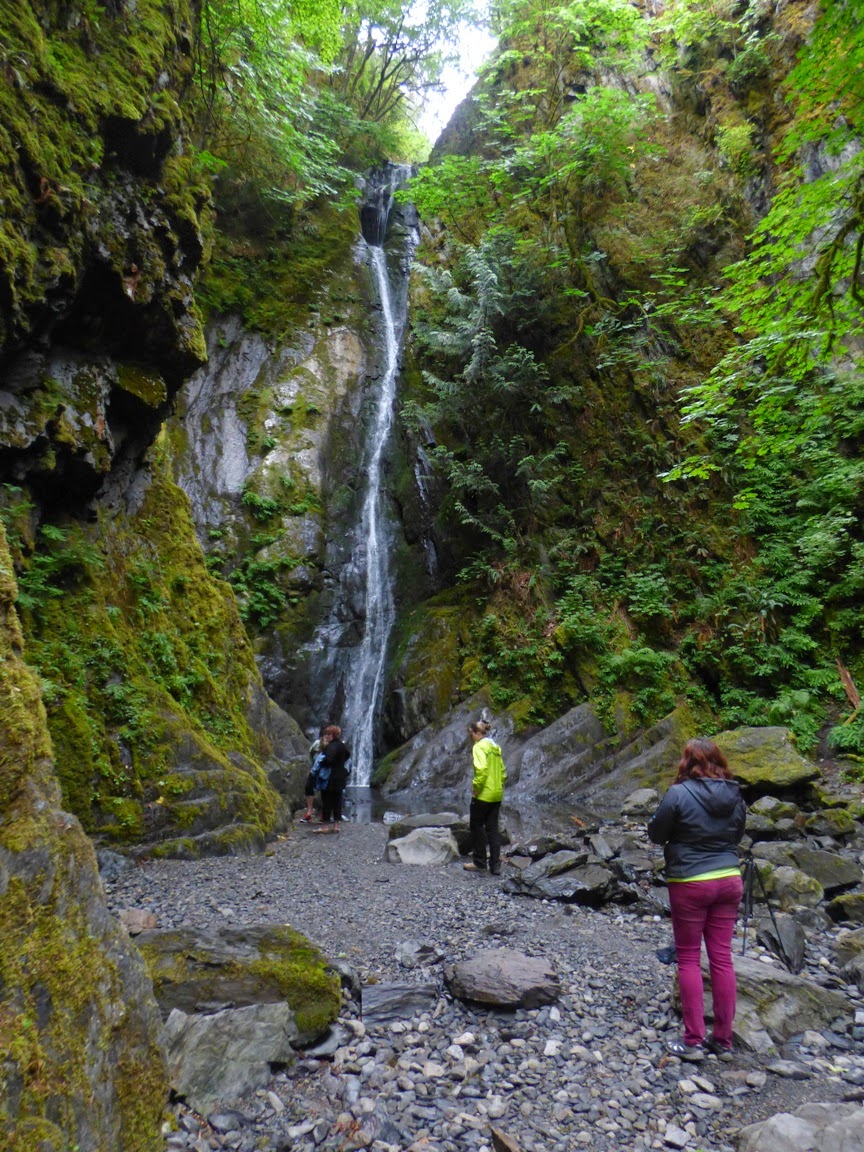 We were there in the dry season (despite the rain that was falling on us), and the falls were at such a low ebb that the pool at the base was not flowing more than a few meters downstream. It was sinking underground instead. 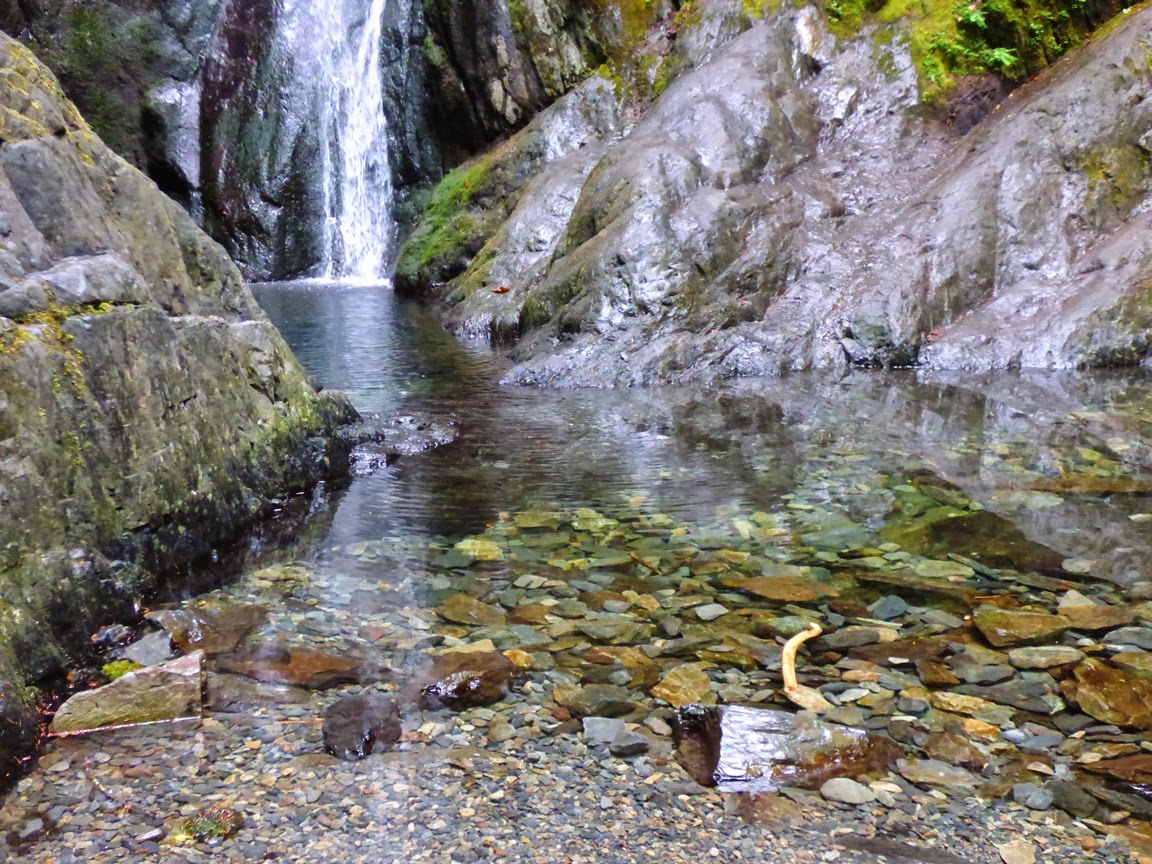 Goldstream Provincial Park was a fascinating little park to visit, but by then our schedule was in serious trouble. We had to catch a 5:30 pm ferry in Nanaimo, and it was well past lunchtime (but we had not had lunch). We hit the highway and headed towards Duncan for food. And some really cool anthropology, as it turned out.

This looks like it turned out alright. Good to have a plan C, D, E...