Into the Great Unknown: Mad Cats and Amoebas? Trying to Keep Names Straight in the Grandest Canyon 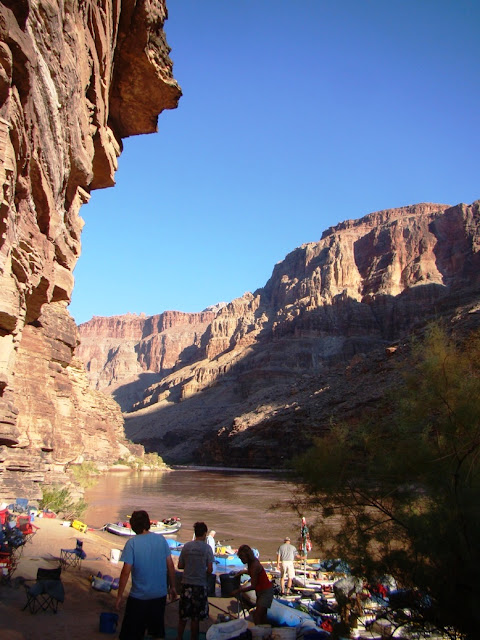 Morning dawned on our crew at Doris Camp on Mile 138 of our rafting journey through the Grand Canyon, a trip I've been calling "Into the Great Unknown". The river was known well enough to our boatmen, but as I've pointed out, this was my first trip, and so I had a heck of a time keeping the geography straight. We had reached day 12 of a 16 day trip, and still had 90 miles to go. We needed to make up for some leisurely days during the previous week. The plan for the day: 27 miles, our longest day of all. We intended to camp at Tuckup. 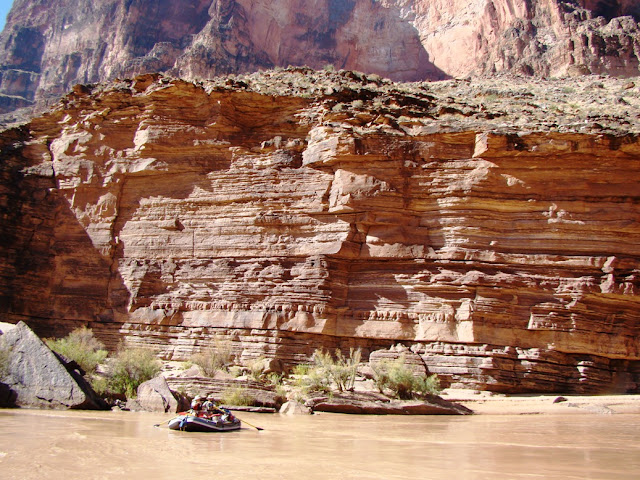 Doris was one of the most unique camps of our trip, with a narrow strip of sand hugging the base of a high overhanging cliff of Tapeats Sandstone (both of the above pictures). After all the concentration on slope failures in the previous post, I'm glad to report there were no rock falls during the night. I did keep my eye on one precariously perched barrel cactus right over the cooking area. It stayed put. 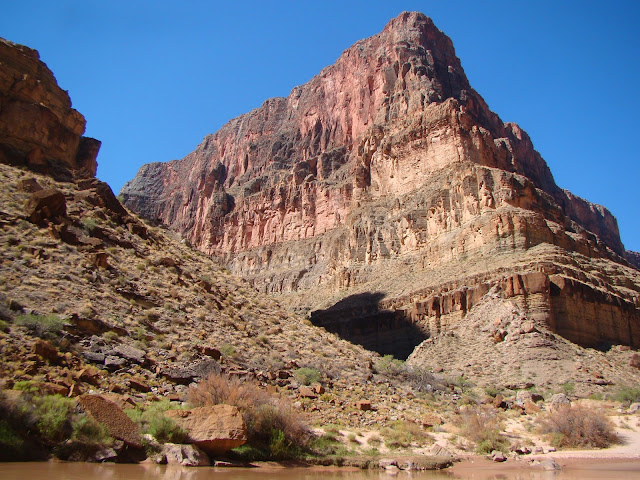 The character of the river changed once again. We had left behind the rugged cliffs of the Granite Gorge, and had "climbed" back into the lower Paleozoic sediments: the Tapeats, Bright Angel and Muav strata. We hadn't actually "climbed", although I was ready to believe that the river was capable of just about anything. Instead, the rocks were gently folded and inclined to bring the Paleozoic sediments to a lower elevation. We had reached the beginning of a 40 mile stretch of the river called the Muav Gorge. 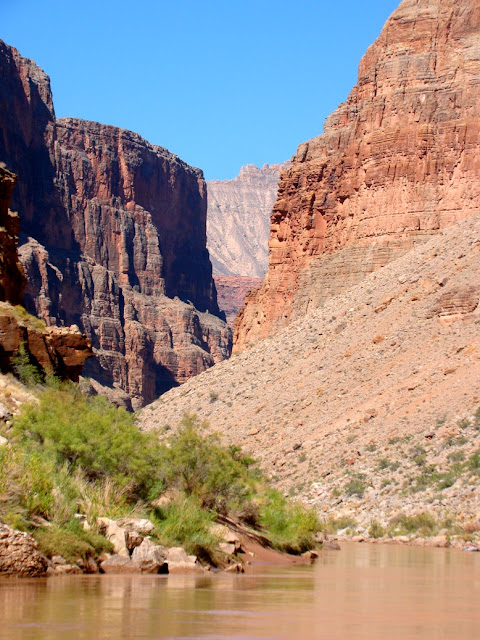 I was reminded somewhat of Marble Canyon, a fond memory, although the cliffs in this stretched towered a few thousand feet higher than those at Marble. Mercifully enough the river had only one worrisome rapid, Upset, which is rated between 3 and 8 depending on flow conditions. Among the other ten rapids, none rated higher than a four. 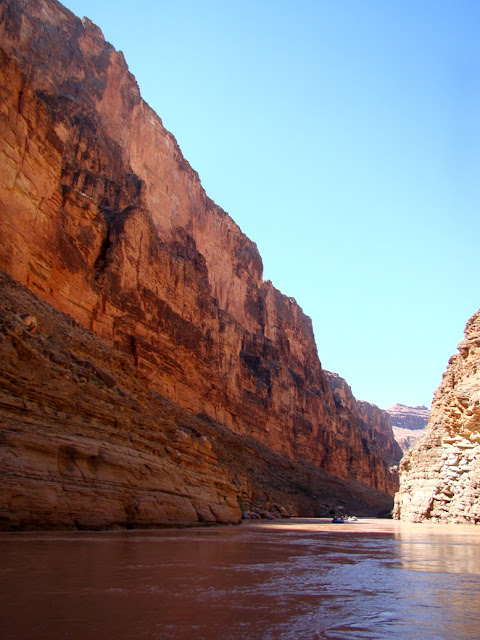 Much of the day involved floating through placid waters in deep and often shaded canyons. I was enjoying myself immensely. Pete of course had to row through the placid canyons, sometimes against the wind. His opinion may differ! 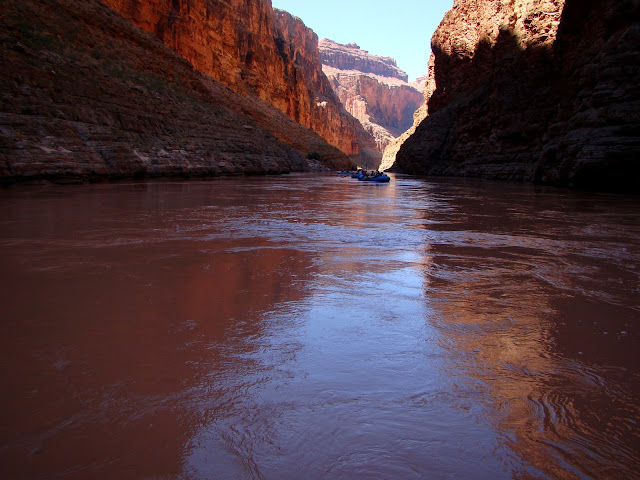 We had just one major side canyon to explore on this day, with a name I was having trouble getting straight. It is called Mad Cat Amoeba, or at least that's just what I kept hearing when anyone said the name over the course of the morning. They were talking about Matkatamiba Canyon, which is a favorite of the boatmen. They had been talking about it for the last day or two.

There were a couple of problems. The canyon entrance is right at the top of a rapid, a sort of "you have one chance to get it right" kind of docking situation. And the docking spot is a narrow pool (no beach), so the boats have to be lashed together to hold them in place. The canyon is an extremely popular stop, and we had to hope no one was there. As it turned out a big group was leaving just as we pulled up.

Another potential problem is flash flooding, which we didn't need to fret about, but you can see what happened here in 2011 at this website: http://www.youtube.com/watch?v=yi1k9dvXjXY. Some of their boats were ripped loose and drifted downstream, while others got stacked on top of each other, with a loss of some supplies to the currents of the river. 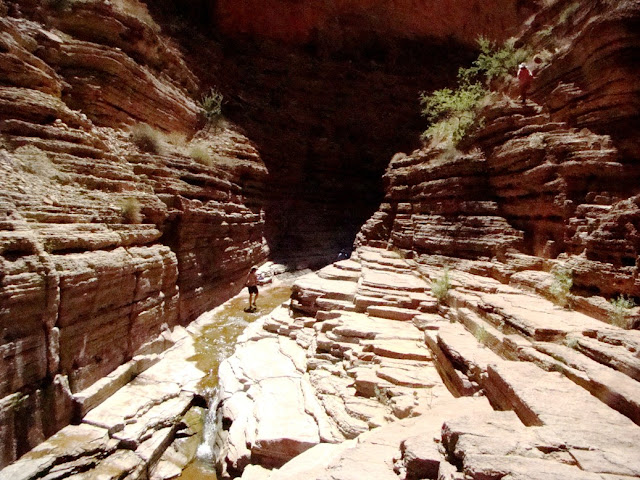 There are two ways to get into the pleasant upper canyon: walk right up the narrows and do some rock climbing, or take the high rocky trail and...do some climbing. Both choices are visible in the picture above. I took the high road... 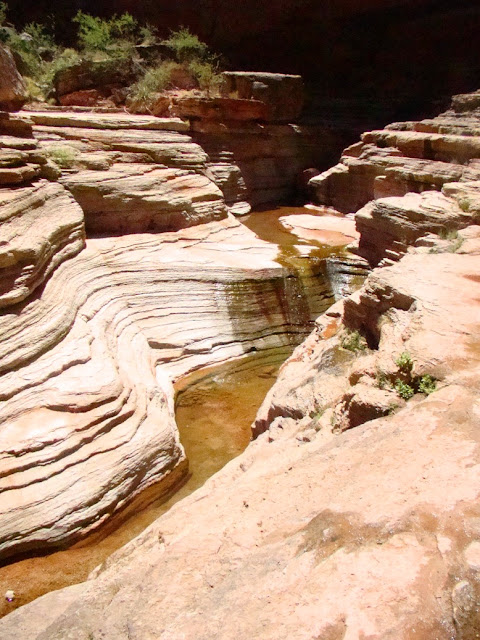 I arrived at the "Patio", a large amphitheater-like place deep in the shade (it was a very hot day). A pleasant clear trickle of water was flowing down the canyon. After all the grand vistas of the previous 12 days, I was starting to focus on the little things, like reflections on the water. 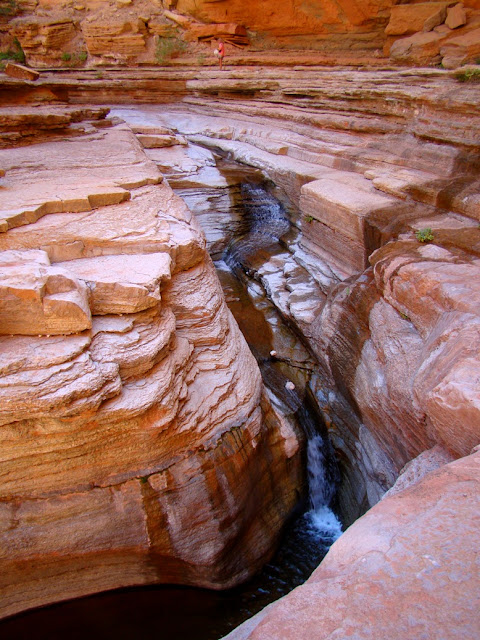 There seem to be few things more precious than water flowing through an intensely arid desert. The heat just accented the coolness of the shadows and the sound of the splashing stream. 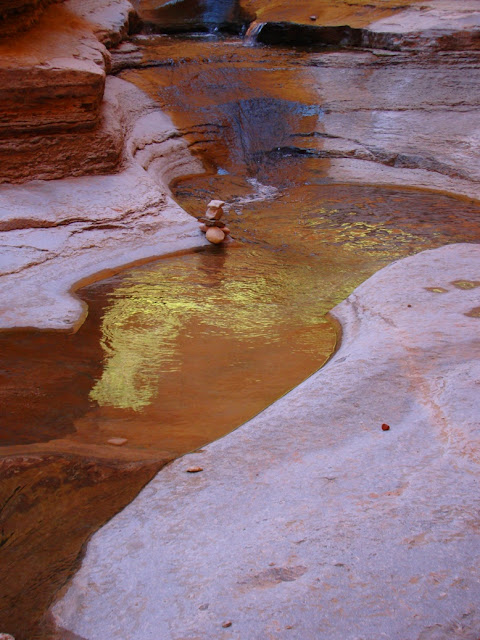 I spent some time on hands and knees looking for some of my shots. 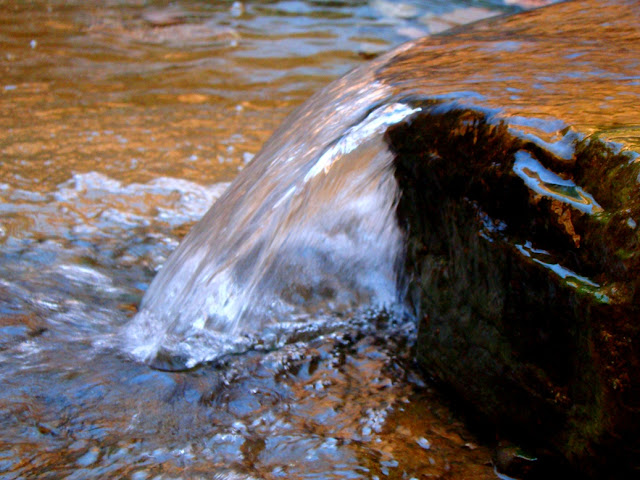 The upper canyon beckoned, and I started that way, but it opened up into the blazing sun, and became much more rocky. There have been fairly recent flooding events. I turned back into the cool shadows. 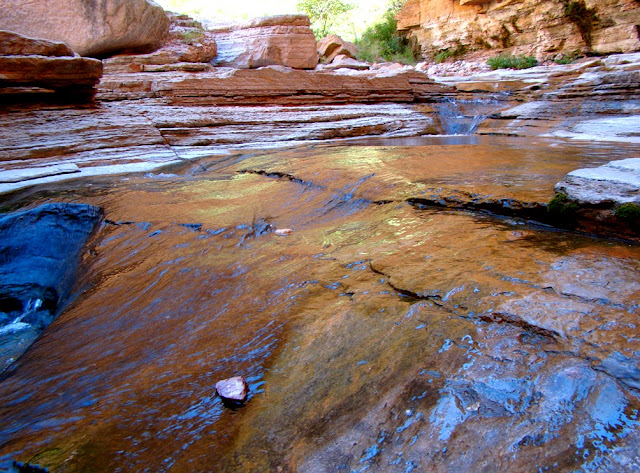 It was a thoroughly pleasant visit, and I didn't really want to get back on the rafts just yet, but we had a lot of miles to go on this particular day. 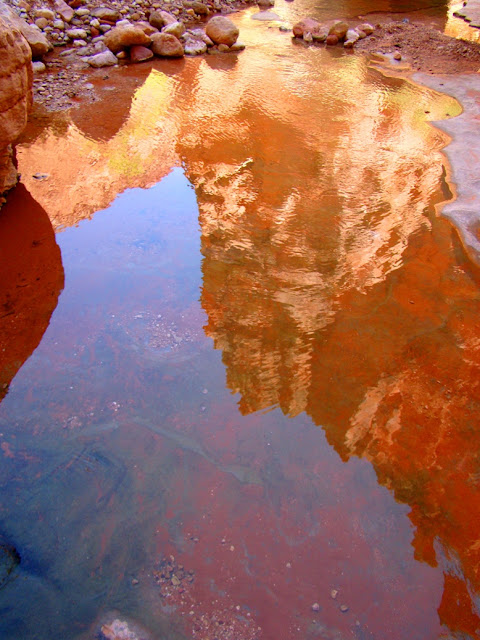 When gazing at these steep cliffs and canyons, we sometimes make comparisons to cathedrals. The analogy is faulty. No human-built cathedral can match a canyon crafted by the gods. 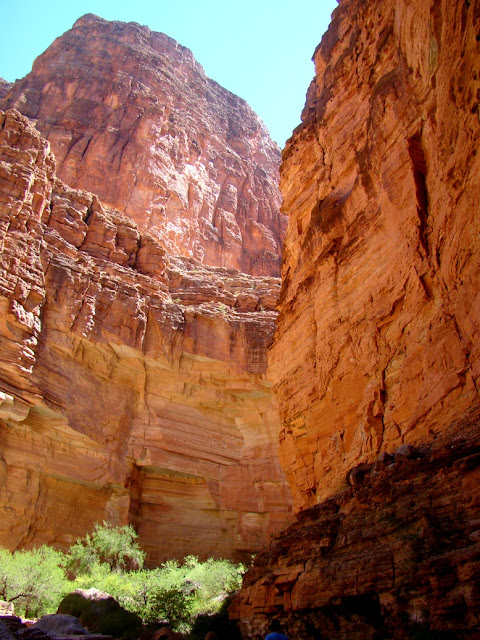 We got back on the river for a few miles and then we took a lunch break at Ledges Camp and spent some more pleasant moments on the eroded benches of Muav Limestone. 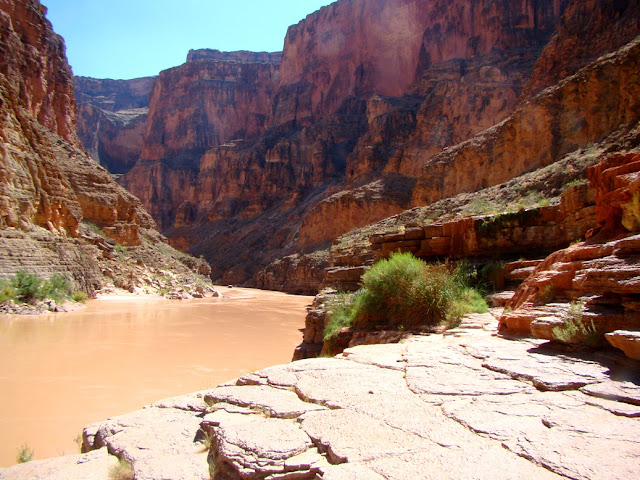 We were approaching the mouth of Havasu Canyon and for a few moments we had a view of Mt. Sinyella, a peak sacred to the nearby Havasupai people (below). We just plain didn't have the time to explore Havasu Canyon, but the blue-green water looked inviting.
We moved down the canyon through the serene gorges. Upset Rapid required a scout, which I found made me apprehensive. We punched our way through the waves with no problems. 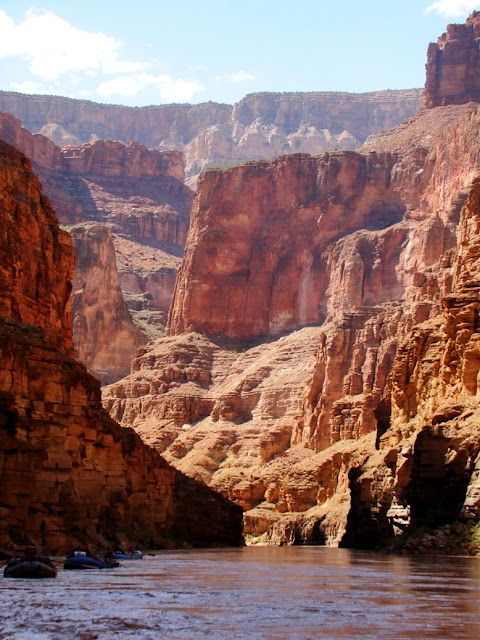 The reflections on the water were mesmerizing. It was a beautiful stretch of canyon. 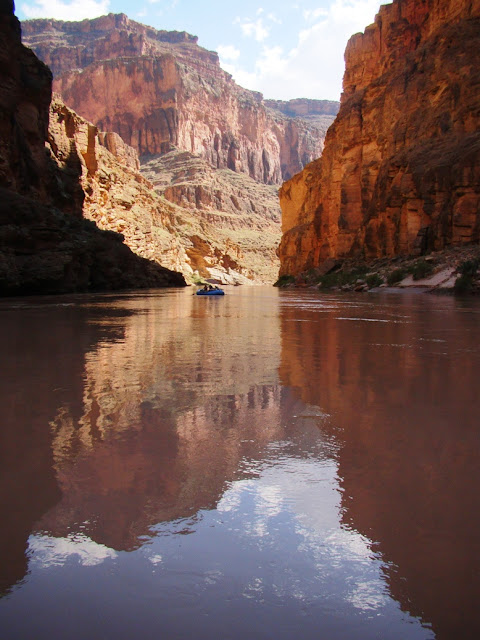 We got to our expected camp and found it occupied by a large group already, so a 27 mile day turned into a 29 mile day. We reached the large barren campsite located at the base of National Canyon. We were beat (Pete rowed 26 miles, while I rowed just two or three miles). The boatmen were talking about Lava Falls Rapid again. It now loomed ahead of us; it was one day away...I didn't really sleep well, but the Milky Way was gorgeous. 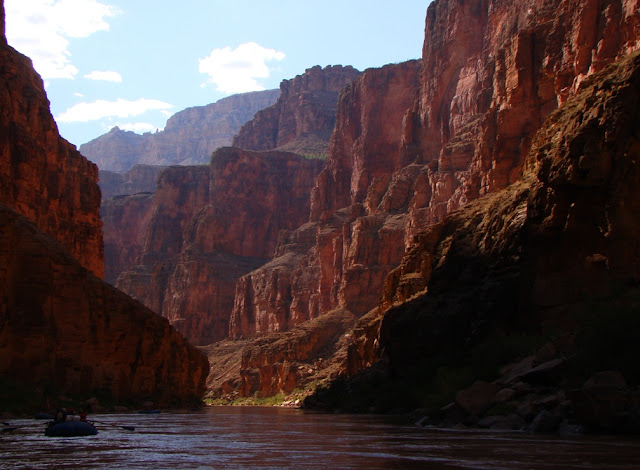 Another glorious day on the water, and the photos are mesmerizing. Thank you so much for sharing your photos and thoughts on your journey, Garry.