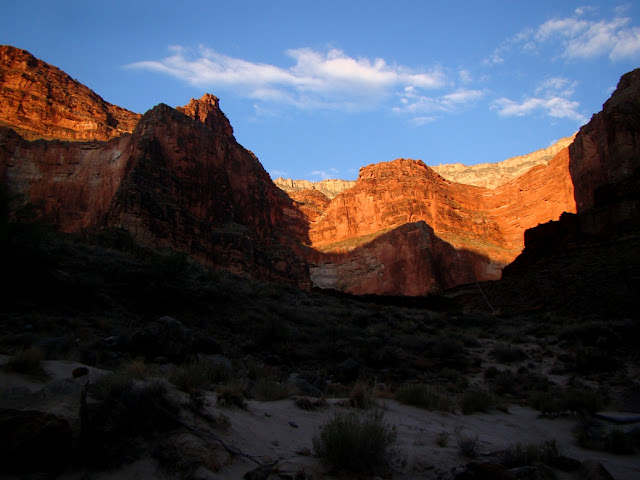 Every day is new. Every day the Canyon is different...

I look back over the notes of my journey down into the Great Unknown, the Colorado River through the Grand Canyon, and I am struck by the number of times I mention change. By mile 80 we had passed through essentially all the major rock units of the Grand Canyon, and one can be forgiven for thinking that things might get repetitious, but it just never happened. I was now fifty miles farther downstream, and every morning, every day produced new revelations. I knew by now on Day 11 that I was having one of the most incredible experiences I would ever have in my life, and still five days remained. 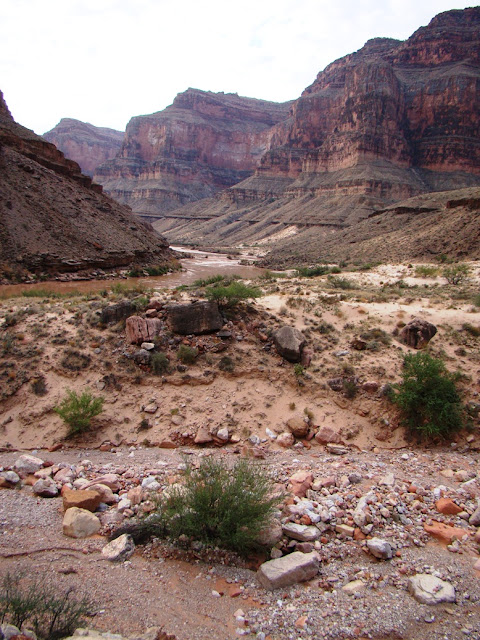 The day began as a sort of "passages" kind of journey. We needed to make 15 miles or so, and there was just one excursion up a side canyon in the plan. But there were also some big rapids to worry about, including Specter, Bedrock, and Deubendorff, as well as seven smaller ones. I could tell I was still a bit spooked after my swim down Crystal Rapid a few days earlier. 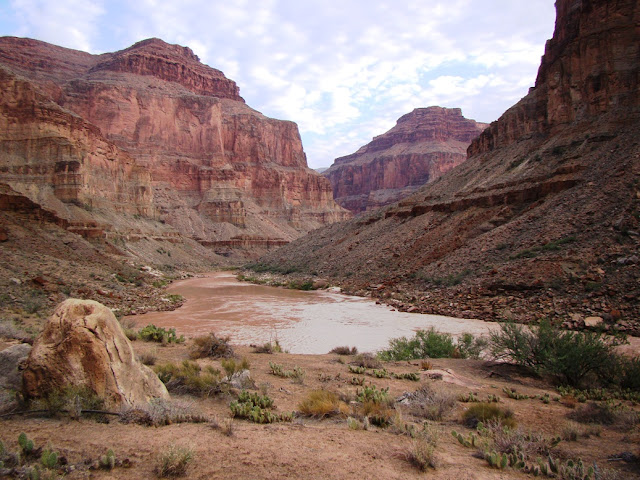 Enfilade Camp was on a sandy beach below a large terrace that promised a decent view. My nephew had hiked up the previous evening and had come face to face with a bighorn ram, so I was a bit curious to see what would be around in the morning. I found a nice view upstream and downstream, and a lot of sheep tracks and droppings, but none of them were visible (of course, given their excellent camouflage, they were probably there watching me). 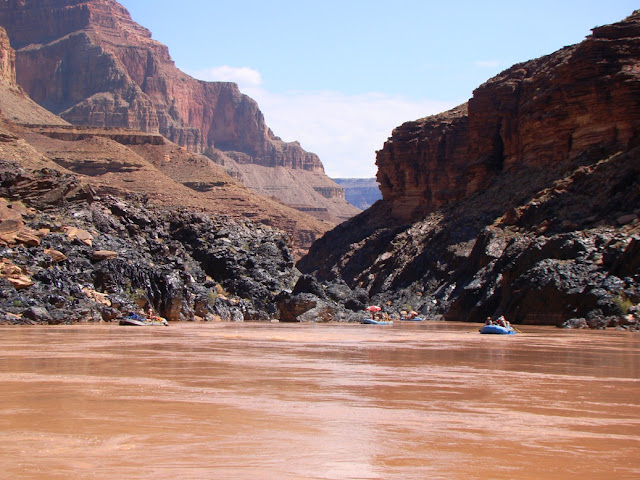 We started the day in the Bright Angel Shale of Cambrian age, but before long we entered into the Granite Gorge again. It's interesting how we refer to the "Granite Gorge" when so much of it is actually composed of black schist. I was just stunned by the polished surfaces that looked all the world like obsidian, even on slopes dozens of feet above the river. 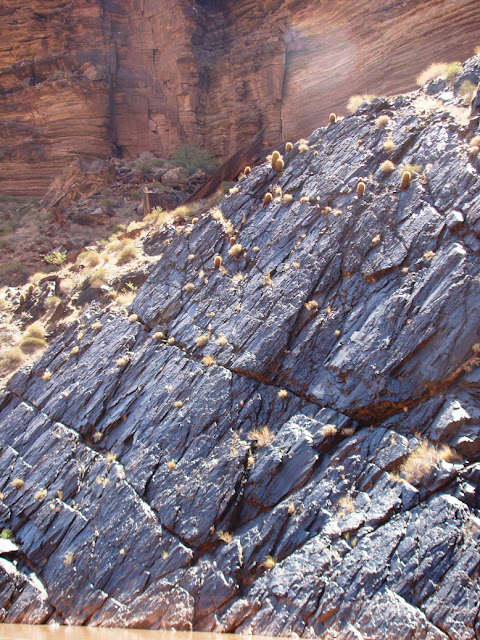 The canyon walls closed in once again, and the schist cliffs rose high above us. 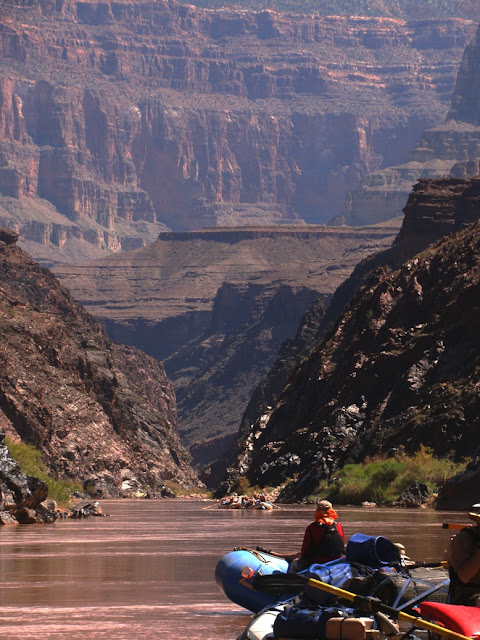 In eleven days we had dropped 1,200 feet or more, and the flora was picking up a definite Mojave-Sonoran flavor. Barrel cacti were common on the slopes above the river. Within a day or so we would be seeing ocotillo. 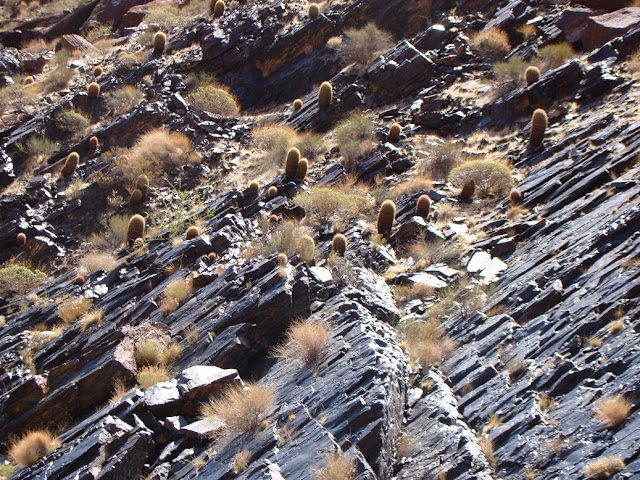 We reached Bedrock Rapid (6-8) and stopped to scout. It was appropriately named, as a big chunk of granite and schist split the river. If a boat went to the left, it would be caught in a too-small current and impossible eddy. But the river right tried to dash the boats against the rock outcrops. It took some hard rowing, but the boatmen got us through just fine. We bounced off a boulder, but it was done quickly and we were okay.
Below the rapid I saw one of those extraordinary sights that seem to occur with continuing regularity. I've mentioned the Great Unconformity, and we saw a wonderful exposure in Blacktail Canyon, described in the previous post. The ancient erosion surface separates 500 million year old sediments from 1.7 billion year old metamorphic rocks.  It is marvelous to be able to lay one's hands on 1.2 billion years of missing history.

But the canyon hides secrets, and one of them is that rocks exist that fill that void. There are in fact lots of rocks, in layers about 12,000 feet thick. We had visited them earlier in the trip, in the area between Nankoweap and Hance Rapid. They too rest on a "great unconformity" spanning 500 million years. They in turn are overlain by the Tapeats Sandstone. Because the Supergroup has been tilted, they contact the rocks above at an angle, so this contact is known as an angular unconformity. 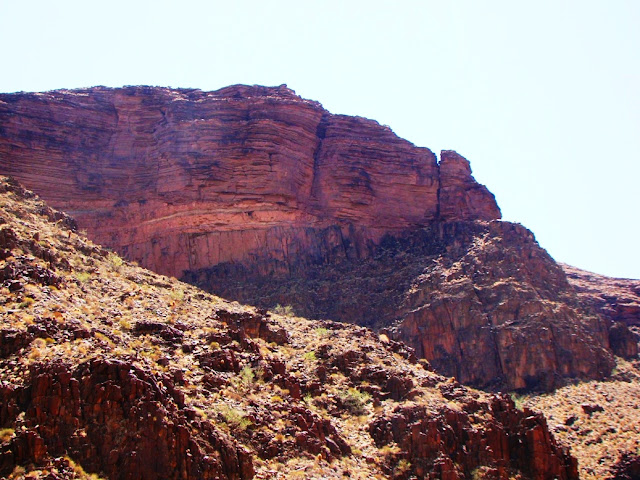 Above Bedrock Rapids, both unconformities could be seen in the same outcrop! The sun was at a difficult angle, so if you can't see it, take a look at the labeled version below. I've drawn this kind of rock relationship on chalkboards many, many times, but I haven't seen as many of them in the real world. 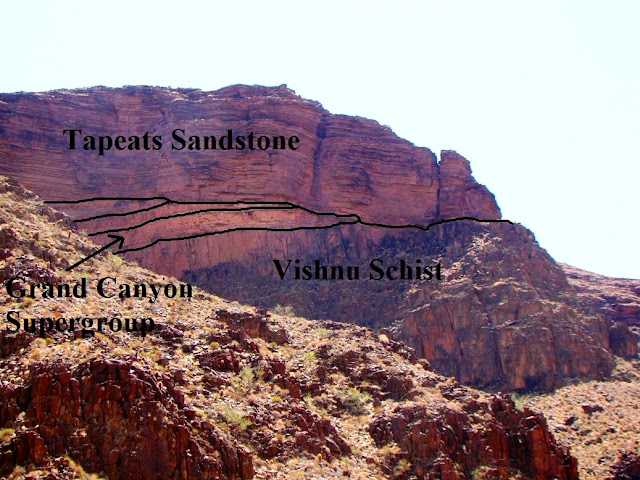 Downstream we encountered Deubendorff Rapid (5-8). As we bulled our way through, we caught the edge of a hole and lost an oar. Pete worked with the remaining oar, but got us through okay, if not a bit soaked. 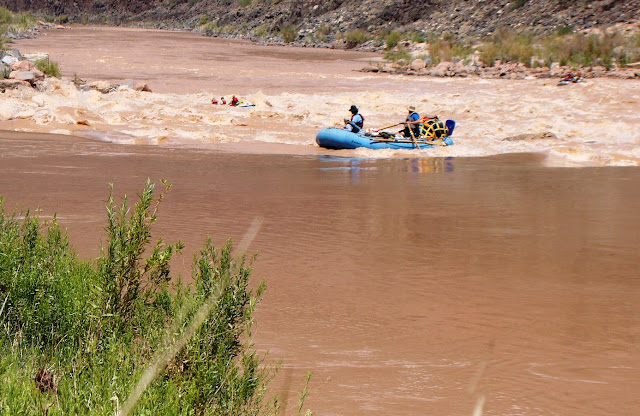 Drifting along the river below, we encountered the second extraordinary sight of the day. Dikes and sills are the result of molten material forcing its way through solid rock. Dikes cut across the previously existing rock, while sills squeeze their way between layers. You can see examples of dikes, but few sills on my Geotripper Images website, and that's the thing: I don't have many pictures of sills. 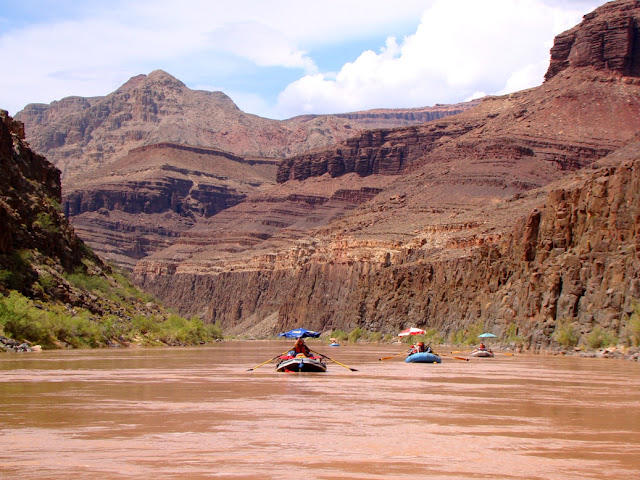 As we came around the bend of the river, a black cliff came into view, a layer that ran parallel to the enclosing layers of Bass Limestone and Hotauta Conglomerate (these form the base of the Grand Canyon Supergroup). It was a basaltic sill of huge proportions. The precise name of the rock is diabase, which was a shallow intrusion that was neither extrusive in texture (fine-grained) or intrusive (coarse-grained). It's a grain-size in-betweener. 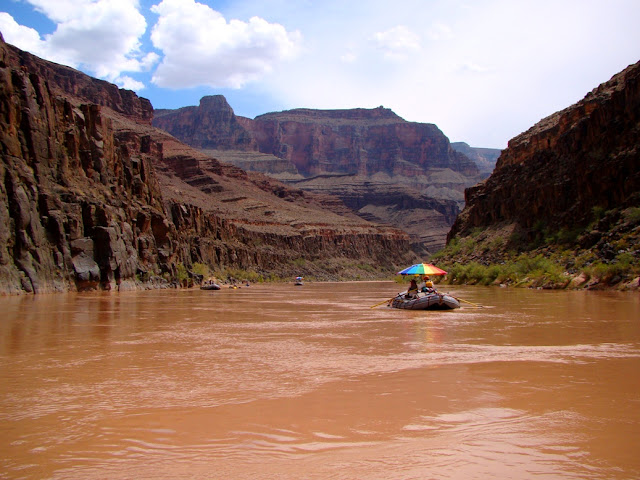 It was one more stunning sight in a canyon with many of them. 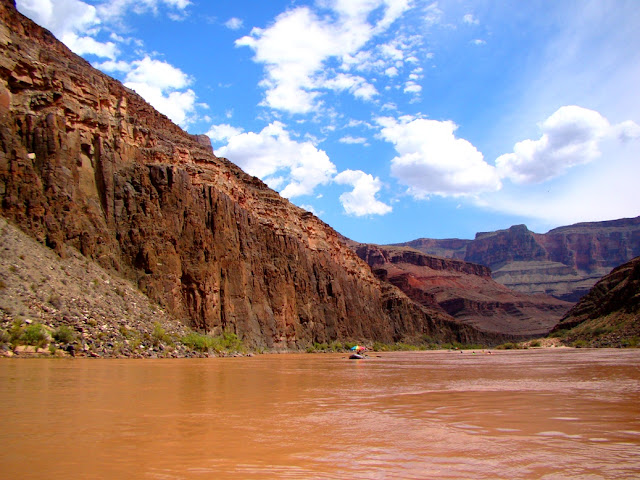 Soon after, the river re-entered exposures of the Granite Gorge Intrusive Suite, and the canyon narrowed. A lot. The walls of schist rose straight out of the river and soared for hundreds of feet. Just past Mile 135 we traveled through the narrowest gorge in the entire Grand Canyon, the Granite Narrows. It was only 76 feet wide. The river was over 100 feet deep! 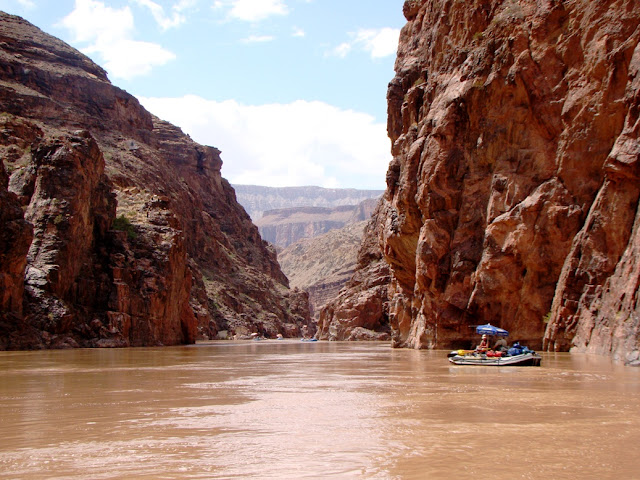 It had been an incredible day, but the best part was just ahead. More on that in the next post!
Posted by Garry Hayes at 8:35 PM

I'm loving the memories that return from my trip. I just wish you'd been there to talk about the geology. The BIG one is coming up.

That sill is one seriously long, epic wall of diabase. It looks like something out of a Lord of the Rings film.