The Airliner Chronicles: Wrinkles Tell a Lot About a Person (and the Earth, too) 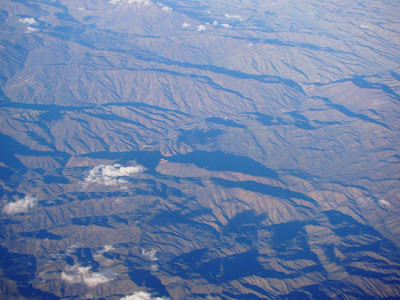 My grandfather had wrinkles. Lots of them. He was a man who spent a large part of his life working outdoors in the days before sunscreen lotions. You could see in his face the rigors of the Great Depression and the tough choices that came with trying to farm in Oklahoma and Texas in the Dust Bowl years.

In the same way, the Earth tells a story through the pattern of wrinkles on the surface of the planet. Some rocks are softer, others are harder, and some are in horizontal layers while others are tilted. Some aren't in layers at all, such as plutonic intrusive rocks, so the type of rock exposed is fairly uniform, unless it has been broken up by jointing. Water and other agents of erosion attack the rocks in a differential manner, and reveal something of the underlying structure in the way that streams cross the landscape (the most commonly recognized drainage patterns are shown in the diagram below).
In the case of my last airline trip, it was a quick way of determining what part of California's Coast Ranges I was flying over. The Coast Ranges are about as schizophrenic as can be: crossed by the iconic San Andreas fault and dozens of others, numerous tracts of rock are juxtaposed against each other. These rock groupings, called terranes, include rocks related to the Sierra Nevada batholith (the Salinian Block), the Franciscan Complex (rocks formed within a trench-subduction zone during Mesozoic time), the Great Valley Group (rocks that formed in a forearc basin between the trench and the Sierra Nevada volcanic arc), and the Coast Ranges Ophiolite (rocks derived from the oceanic crust of the Pacific/Farallon plates and the underlying mantle).

The first photo above doesn't reveal a lot of rock, as most of the surfaces are covered by grass and brush. If you concentrate on any one drainage, you will notice that many small tributary channels gather into larger and larger channels in the way that a tree has multitudes of branches that end up at a single trunk. This is an example of dendritic ("tree-like") drainage pattern, which indicates that the underlying rock is fairly uniform. There is no evidence of sedimentary layering, and thus the rocks must be part of the Salinian Block, the Coast Range Ophiolite, or the Franciscan Complex (layers are found over short distances in the latter two, but not enough to effect the overall drainage pattern). Of course, this part of the Coast Ranges is right in my backyard, so I knew I was seeing mainly the ophiolite found in the upper part of Del Puerto Canyon above the town of Patterson. 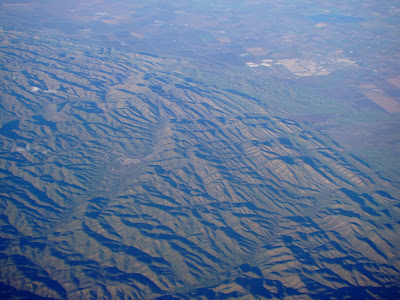 On the other hand, look at the picture above, from the easternmost part of the Coast Ranges (the town of Patterson is the light colored area in the upper right hand side). The shadows on the right half of the picture run parallel to each other, but at right angles to the eastern margin of the mountain range. Streams that would be expected to run from left to right down the slope of the mountains are deflected into northwest trending strips. Clearly some of the rock here is more resistant to erosion, and the pattern suggests sedimentary layers that have been turned on edge. This is the hallmark of the Great Valley Group. These rocks were laid down in a shallow sea that subsided and collected more sediments and subsided under the weight of the overlying sediments again, over and over. Eventually the sediments reached a thickness of 20,000-25,000 feet. Later deformation turned this incredibly thick sequence on end forming a vast homocline, indicated by the trellis drainage pattern.

I saw one other really distinctive drainage pattern on my trip, but far removed from these first two photos. If you look at the photo below, you might pick out that many of the smaller channels are dendritic, but that the larger channels are roughly parallel to each other. This is called a parallel drainage pattern, caused by streams eroding uniform, but slightly sloping rocks. I was lost at the moment because we had been flying over clouds for several hours, but the moment I saw these channels, I knew exactly where we were: on the flanks of the Valles Caldera (sometimes called the Jemez Caldera). There is no other place in New Mexico (and indeed most of the southwest) quite like it. 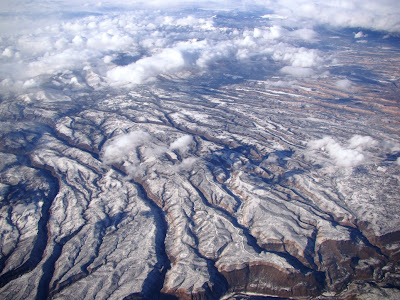 The caldera is a vast volcanic feature which formed when a gigantic eruption about 1.15 million years ago coated the entire region with around 70 cubic miles of volcanic ash. The volume of volcanic ash blown out of the volcanic vent was so great that the center of the volcano collapsed inwards, forming the caldera. Popular media outlets call these calderas "supervolcanoes" (Yellowstone being the most famous example). The NASA image below gives a wider perspective of the volcano. The circular mounds in the central area are volcanic cones that erupted years later. From this perspective (and distance), the drainage could be considered more of a radial pattern.
The Airliner Chronicles is one of my on-again/off-again serial features, which is usually updated whenever I fly somewhere. These pics were from a flight to and from St. Louis during the Christmas break.
Posted by Garry Hayes at 9:00 PM